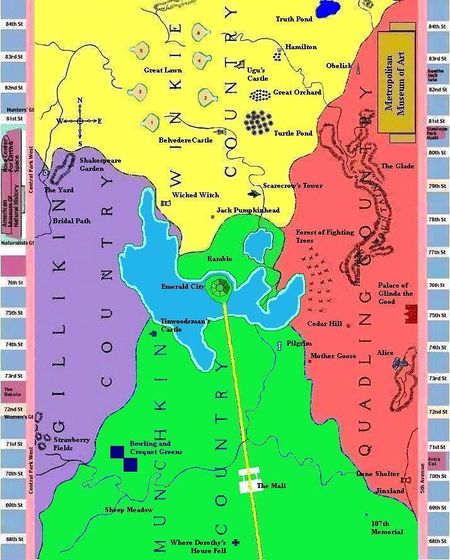 Central Park,not to be confused with south park, is a demilitarized zone within the confines of New York City in the borough of Manhattan. It was founded in 1854 by Oscar Diggs of Tammany Hall fame. Divided into four countries, central park maintains a diverse ecosystem wedged between war in Harlem, and other buroughs of Manhattan. Often a peaceful area, power struggles are commonplace, but seem to resolve themselves without U.N. intervention

Let the joyous news be spread. The wicked witch at last is dead![edit]

In May of 1979 the Wicked Witch of East became a victim of home invasion, and the inhabitants of Munchkin Land were freed. This tenuous peace would not last however. The Wicked Witch of Central Park West found out what Dorothy did to her sister, and began terrorizing the whole of Munchkin Land. Flying monkeys were dispatched to kill any who protected Dorothy and the ruby slippers. The Tin Woodman’s brother- John Lennon became the first victim of these monkeys in the fall of 1980.

In an effort to defeat the Wicked Witch of Central Park West once and for all Dorothy set out for Emerald City. With the help of three pig farmers- the Tin Woodman, the Scarecrow, and the Cowardly Lion, Dorothy was able to overcome all obstacles but one. Knowing of Dorothy’s darker side of drug abuse the Wicked Witch cultivated a field of poppy plants, and opened an opium den off exit 12 of the yellow brick road. After several days of chasing the dragon Dorothy was tossed out penniless and forced to hitch a ride the rest of the way. Upon arrival in the Emerald City her withdrawals continued with visions of wildly colored horses, and a crack fueled rampage at the palace of the great Wizard. After months of rehabbing, Dorothy was commanded by the Wizard of Central Park to recover the Wicked Witch’s magic vacuum cleaner. 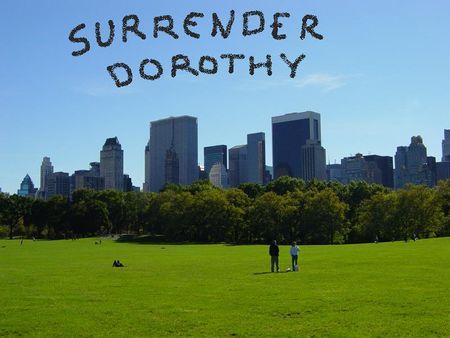 Residents of Central Park watch as the Wicked Witch makes her demands.

On her journey through the ramble to the castle of the Wicked Witch, Dorothy & Company are ambushed by flying monkeys. Oh, and their was something about some trees that were alive and throwing apples at Dorothy, and a pterodactl that people thought was some guy hanging himself... Anyway, so Dorothy and her dog Toto are abducted, and delivered to the witch. Grabbing her hourglass the witch challenges Dorothy to a life or death game of Boggle. Dorothy loses when she refuses to use the letter combination for the word ‘ass’. The witch sets her easy bake oven to 350F, and leaves Dorothy to think about her future life as an overcooked pastry. By this time Toto has escaped, and reconnoitered with the three pig farmers. Outside the witch’s castle they encounter her guards (see Insane Clown Posse), and pull the old switcheroo. Entering the castle they find Dorothy but are discovered by the wicked witch while trying to escape. 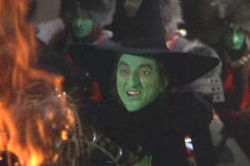 Admit it, this part scared you. 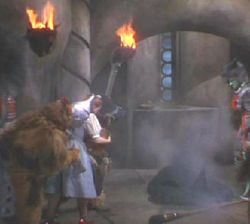 She turned me into a newt!

How about a little fire, Scarecrow?[edit]

Instead of cutting the ring of power from the witch's hand (which would only delay her ultimate destruction) Dorothy tosses a bucket of iced tea in her face- melting her. The witch's guards relieved by this outcome allow Dorothy & Company to leave, and award Dorothy with the WWoCPW’s vacuum cleaner. This sets up a surprise visit to the wizard who firmly believed the next time he would see Dorothy would be on a dessert cart at the MET’s next charity luncheon. Dorothy has fulfilled her quest and now demands the wizard grant her three friends one wish each. The Scarecrow asks for a pacemaker, the Tin Woodman a new crank, and steroids for the Cowardly Lion. The wizard arbitrarily refuses, and all four are cowered before his might until Toto discovers him behind a curtain, hiding his true identity as an Amway salesman. Having no choice the wizard replaces the Tin Man’s rusty old crank, installs a pacemaker for the Scarecrow, and gives a year supply of juice to the Cowardly Lion. This would begin an era of relative peace in Central Park until the return of Ozma, princess of Central Park in the year 1989. Various powerbrokers would then vie for control of the park, these included-Ozma, The Gnome King, Tick-Tock, Ed Koch, The Skeezers, Professor Wogglebug, Donald Trump, Jack Pumpkinhead, and John F. Kennedy Jr.

Home of the yellow brick road or ‘literary walk’, statues of old dead writers you had to do loads of homework and reading on dot the landscape. Shakespeare’s statue has his name on the wrong side, Robert Burns and Sir Walter Scott are there. The lake, Bethesda Terrace, and the Naumberg Brandshell all follow the famous Mall promenade. You might see munchkins pop out from time to time behind terraces of cotton candy and lollipops. Be sure to give them some change, remember they were paid less than Toto. The fighting 107th memorial is to the southeast commemorating the Battle of 5th Avenue. Mr. Pibb's brother- Dr. Pipt still runs a secret laboratory in the south of Munchkin.

Site of the sacred Strawberry Fields, this section of the park is home to the old witch Mombi. Practicing magic illegally (all magic was outlawed by Ozma, with exception of the wizard, and Professor Ellis D. Trails) she continues to plot the overthrow of Ozma with the help of paddleboat rentals from the west side of the lake. The bridal path to the north marks the sexually deviant sporting trials of Sleeping Beauty inflicted upon her by Prince Charming, and the annual running of the oiled gauntlet.

Widely known as the safe section of the park, Quadling is governed by Glinda the Good. She spends your tax dollars effectively fighting against denizens of Central Park West that remain from the old regime of the wicked witch. People like Demi Moore. Monuments to Alice in Wonderland, and Mother Goose are nearby the skating rink and popular tourist attraction-The Forest of Fighting Trees. The Metropolitan Museum of Art and Cleopatra’s Needle dominate the landscape of northern Quadling, with over 10 million visitors per year.

central park was the site of the ledgendary battle of midway. where the stunt pilots fought the racing pilots with all their might. at the height of the battle the 99th airborne division decided on a groundbreaking strategy, crashing their airplanes and breaking the ground. the paratroopers of the 98th airborne division decided that there was only one thing to do,take Manhattan island. while the stunt planes made heart shaped circles and carried banners of advertisement to promote their actions, the racing planes realized the battle was lost and that it was time to retreat. they sped away narrowly avoiding the waffle copter.

“So I got the hell out of the park, and went home. I walked all the way. It wasn't too far, and I wasn't tired or even drunk any more. It was just very cold and nobody around anywhere.”

A desolate place of baseball diamonds, Winkie Country has always been the buffer zone between the rest of Central Park and Harlem- land of the dreaded Gnome King. Drug dealers, pimps, muggers, panhandlers, mark-ass tricks, skags, skip skops, scallywags, hoes, heifers, hee-ha’s, and hooly-hoos comb the area of Winkie looking for a score.