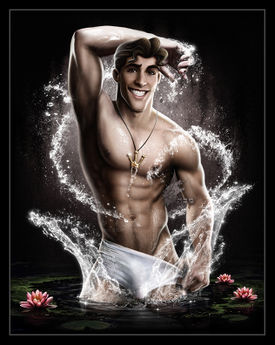 Disney does the best Prince Charmings.

This article deals with the folklore figure. For the current Disneyland Great Council member, see Prince Jeremy the Charming.

Prince Charming is what every woman wants.[1] He is tall, dark and handsome (or if the woman prefers, blond, medium-height, and well-tanned). He is brawny but not bulky. He is rich. Prince Charming never forgets an anniversary or an important date. He always watches the kids with a grin on his face. He never leaves the toilet seat up. He is assertive and gets his way, but always makes the woman feel that she is getting her own way. While he may or may not be a prince - as the individual woman's desires dictate - Prince Charming is always manly. And he never, never comes first.

Also, like unicorns and Santa Claus, he does not exist. He is a figment of the female imagination. But therein lies the appeal: he is the faceless yet attractive "everyman" to every woman. Again, this is just what every woman wants.

An artist's conception of the very first Prince Charming.

Since women could daydream, they have dreamed of a perfect man who would come and sweep them off their feet - both literally and figuratively - away to a perfect life. Things like gathering berries, cleaning soiled loin cloths, and feeding starving brats tended to tire even the most energetic cavewoman, especially when she had a rude and unappreciative caveman back at the cave. As society developed and moved beyond hunter-gatherers and into the eras of kingdoms and empires, women tended to dream of "blue-blooded"[2] princes or other male royalty who would appear from nowhere, fall in love with them, and whisk them off to a perfect and enchanted life of ease on a hilltop castle.

It was such bullshit, in fact, that even women came to realize that Prince Charming did not exist. His characteristics are less defined than those of other imaginary beings like the Easter Bunny or a good husband. Really, his name sums up his identity: He is a man of standing and rank (hence, a "prince,") and he is physically and personally appealing (hence, charming). That's it. Fairy tales often leave the character of Prince Charming completely undeveloped, since no one really knows who he is (not even the heroine). Indeed, Prince Charming often remains a virtual stranger to the heroine until the "happily ever after" ending. And this is for a good reason: if the heroine got to know the Prince before they could consummate their love, she would surely find him to be a shit-eating bastard like every other man alive. Then the story would be over, sans happy ending.

What Prince Charming Means for Men[edit] 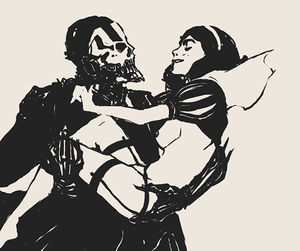 Men, you don't have to be Prince Charming to get the girl.

This would all be a problem for regular men, of course, if Prince Charming actually existed. As explained above, however, he does not. Even women who marry actual princes end up settling for a normal human being. So all Prince Charming really does is get women's hopes up for nothing. Thanks, Brothers Grimm!

Men, on the other hand, can rejoice at the fact that they do not actually have to compete with any "Prince Charming" for a mate. Perfectly normal schlubs can thus end up with women who would rate as princesses if they were actual royalty. In fact, a recent poll taken by Consumer Reports indicates that 93% of men vow that their wives really believe themselves to be princesses, and demand they be treated as such.[3]