From Uncyclopedia, the content-free encyclopedia
Jump to navigation Jump to search
“Absolutely delicious, the greatest thing I've ever tasted!”

“Hey! We thought of this first!”

Chef Meaty Amin's Gourmet Microwave Entrees is a popular easy to cook crap food, popular in the United States, Uganda, Saudi Arabia, and the thousands of nameless islands in the middle of nowhere where they still have cannibalism. Head chef Idi Amin uses a secret blend of 11 herbs and spices to bring out the savory, natural flavor of the freshly prepared human. Oh, sorry, I meant to say chicken. 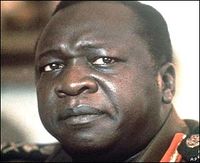 Our head chef uses top of the line spices to bring out the flavor of the, er..."tofu."

Wikipedia doesn't have a proper article about Meaty Amin. It really wouldn't help those so-called experts by writing one either.

Chef Meaty Amin's Gourmet Microwave Entrees comes in five succulent flavors that are illegal in every country in the world except Papua New Guinea. All dishes are free of MSG laden Asians and are completely kosher. Look for them at your local grocer!

Our house favorite! Made with pureed yams, potatoes, carrots, babies, stringbeans, mushrooms, and Teamsters. Topped with a sweet and spicy Defense Minister sauce.

Made for old white people, out of old white people! Chef Amin's easy to digest meals are perfect for the elderly. You should feed them to your elder every day, so when they die, they'll be nice and fat and you'll have more to go around!

Send your mouth on a gondola ride! Chef Amin himself goes out every morning to hand pick the finest meats from a trench ouside a mafia controlled city in Sicily. He then tops them with fresh tomato sauce and hand grated Parmesan cheese. May contain body hair, bigotry, and other Italian stereotypes! 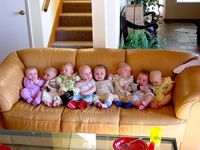 We use only the finest ingredients!

Yee haw! That gourmet varmint Chef Amin gone done and made a helpin' of Texas chili with a real kick! He took chopped United States Congressmen and topped 'em with beans, spices, and the spirit of the Lone Star state. Darn tootin'!