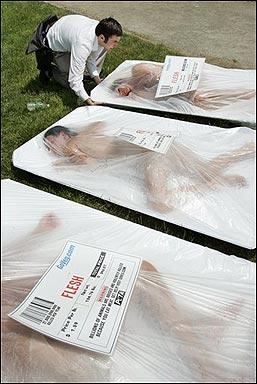 NEW YORK CITY, New York, USA - The Soylent Green Company, known for their affordable, wholesome and nutritious food, is suing veteran actor Charlton Heston over his rather severe claim that Soylent Green is people. A spokesman for the company said, "It is high time that someone laid down the law for Mr. Heston. We at Soylent Green support the right to free speech, but there is a difference between a genuine complaint and irresponsible slander. Shortly after he uttered these remarks, we have seen a substantial decline of interest in our product, both by local merchants and retailers, and the general public. We believe Mr. Heston is directly responsible, and it is high time he pays for his actions. Workers who are 'reformed' junkies and hippies have been laid off because of this slump. Really, this is no laughing matter." So "STOP LAUGHING!!" he excitedly ordered, seemingly to lose some composure.

The Company has developed a reputation for its reputable service and ecologically-friendly food, has launched a "fact based" ad campaign, in which it publicly displays a list of all its ingredients, except for the ninety-seven percent that is listed as "secret." The Company is quick to point out a distinct lack of "whole people."

Al Gore, former US Vice President and movie star, Howard Dean head of the Democrat National Committee, and Nancy Pelosi, Speaker of The House of Representatives whose husband manufacturers the secret ingredient of the product for the company, are all on the Company's Board of Directors, and are featured in a television commercial dressed in cowboy hats, and eating what appears to be disguised Tacos, not Soylent Green, saying "Soylent Green tastes good with ketchup! Or, on the 'Barbie!' Yippee!!Yahoo!!"

Other more direct-focused ad campaigns, featuring slogans such as "Charleton Heston is a card-carrying Conservative" "He probably carries guns and salutes the flag!" and, "Heston is a monkey lover!" and, "We guarantee that with our product, you wont be eating babies, unlike Charleton Heston... who does eat whole babies," will be scheduled to run during the Super Bowl should the campaign need to be extended into next year. Soylent Green "wanted to re-affirm it's positive influence in the world."

When asked if Soylent Green contained any "people parts what-so-ever" or, if human limbs (arms/legs, with or without feet/toes and/or hands/fingers), human torso, heads, with or without brains, etc. the company spokesman initially responded saying "We take out all metal, including mercury fillings, metal pins, screws, and plates etc. to be environmentally sensitive," continuing "and because we could get sued if someone choked on something." He then changed demeanor becoming angry saying, "No further comment on this!! I'm insulted by such a question!" adding "To conclude, Soylent Green is your friend. It is definitely not made out of WHOLE PEOPLE."

Marketers and analysts predict that this heavy wave of marketing will likely increase sales,at least for a time. Soylent Green stock has already risen eight percent today. However, insider selling of the stock has skyrocketed dramatically, with most saying they need to raise money for family expenses. One Director cashed in twenty million dollars in shares "for his daughter's education at City University." Non-insider investors are preparing for a big boom if customers become convinced to once again buy Soylent Green without the lingering fear of the possibility of unintentional cannibalism.

One loyal customer who never stopped purchasing Soylent Green for her family said "I like to try to recognize the different tastes" said Mary Lou Fisher of Little Swamp, Miss. "I once thought I had some of actor James Doohan who played 'Scotty' of Star Trek who was cremated two years ago. Fisher said "he tasted a bit burnt, and I kept talking with a Scottish accent." She continued "more recently I think I had a piece of Anna Nicole Smith." "You never know," she added happily while looking at her chest. Other customers reacted differently to Heston's charges, saying only "Yuk!"

Recently, Soylent Green encountered another snag when it was discovered they infuse their product with a Recombinant Growth Hormone, drawing both criticism and quizzical looks from animal rights activists, who were both apalled at the "blatant mistreatment and exploitation" of the cows, and surprised at the fact that Soylent Green needed cows at all for the production of their product in the first place. "Frankly, it creeps me right the hell out." Says local PETA activist, Mark Bornetti. "If they use cows, God knows what else they use to make that stuff... maybe even people." Mr. Bornetti is currently facing legal action regarding his statement.

This article features first-hand journalism by an UnNews correspondent.
Retrieved from "https://en.uncyclopedia.co/w/index.php?title=UnNews:Soylent_Green_sues_Heston_for_defamation&oldid=5368170"
Categories: