An Uncyclomedia exclusive! An excerpt of the most popular recipes from the best-selling book by Peter Sallinger! 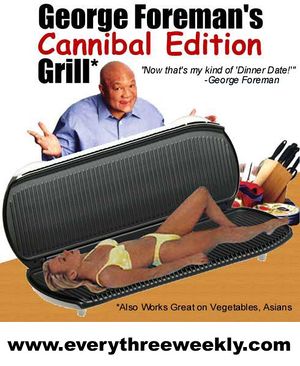 An excellent choice for quick and easy to prepare meals.

In all honesty, this may actually be a sacrificial cruft-page that the author has included for you to edit, rather than the really good main article. So, have at it!

Oscargot, considered a delicacy by many, is a French dish devised as revenge against Oscar Wilde for usurping one of France's the most prized cultural innovations, namely great fashion sense. That and nobody bothers to translate all his quotes into French.

Place Oscar Wilde in a pot of boiling water. Once he is tender, drain, and rub butter and minced garlic all over him. Bake at 350 degrees for 40 minutes. Let cool. Dice Mr. Wilde and place the pieces in the snail shells. Serves 80.

Oscargot has a sharp, cutting flavor, but some find it a bit dry.

Put your favorite Oscar Wilde quotes on slips of paper, and place one in each oscargot shell. Say "in bed" after reading them.

Don't let the looks fool you. He's actually a vegetarian.

Kim Il Sung Soup, or, as it is known in its native North Korea, Kim Ir Sung Soup, is a highly prized delicacy considered the most delicious food ever by the population of North Korea. However, it's deliciousness is denied by the rest of the world.

Dig up the Great Leader. Cut off his fingers. Bring water to a boil. After water boils, put fingers and cow pies in soup, then add burrito for flavoring. Cook for three hours.

Can be served hot or cold. Both types have their own, specific positive qualities.

This dish is not popular outside of North Korea. Some describe it as "tasting worse than a bear's dick."

North Koreans disagree, arguing that it actually tastes much better than a bear's dick.

A similar dish to monkey brains. Not very filling but good for a light snack.

Simply smash the monkey's skull open revealing the brain using the hammer. Then add some turkey stuffing because the brain cavity will be mostly hollow. However, with all the extra room, the president's head makes a dandy cup.

Also another name for the black oil, this is a favorite among the indigenous people of hell. This delicacy has been secretly fed to American citizens over many years without them knowing. How? Why do you think your Apple Jacks don't taste like apples? And don't get me started on those cinnamon swirls in every bite.

This popular drink is usually had around brunch. Named after the Queen Mary of England for her impressive menstrual cycles.