LOS ANGELES, CA In an odd twist, the newest trend to take over the airwaves in the realm of TV is cannibalism. It all started earlier this month with popular show Meet the Press changing its format. Abandoning the old form of different journalists discussing the week's events, the new concept featured host Tim Russert inviting members of the Press to the show then eating them alive. "We really decided to take a whole new approach with Eat the Press," said Irving Serfont, co-producer of both incarnations of the show. "We knew people were- if you'll pardon the pun- hungering for something new on TV. So we took a leap of faith." 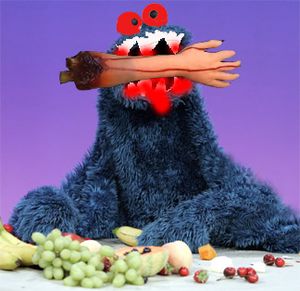 A scene from the gruesome new children's show, Sliceofme Street.

The gamble proved to be a successful one, with Eat the Press enjoying huge Nielsen ratings. Other shows, eager to jump on the flesh-eating bandwagon, soon switched their formats to match the lofty ratings of Eat the Press. Things really started to pick up when ABC made the first cannibalism-oriented show that had nothing to do with news. Delicious Housewives, originally titled Desperate Housewives, told the story of five suburban mothers each trying to eat each other. "This was just wonderful," said Stay at Home Mom/Cannibal Stephanie Greppner. "I couldn't really identify with the women in the other version of the show, but this one makes a lot of sense to me."

Soon, children's shows [Sliceofme Street,] dramas [Grey's Anatomy, which did not change names but changed subject matter,] and comedies all followed suit. "I only let my daughter watch Sliceofme Street and Killyou [originally Caillou]," said Greppner. "The other shows contain content I disapprove of. And I just love How I Ate Your Mother. I had no idea Doogie Houser could be such a convincing flesh-eater!" A few shows are holding out against the new Must Flee TV trends. "Really, it'd be rather redundant to have a doctor who both treated patients and ate them, too," said House writer James Ferguson. However, these few holdout shows are losing ratings quickly, and looked down upon by the rest of the media. "It's about time these Luddites got with the times," said Serfont. "If you don't have cannibalism, what do you have?"

This article features first-hand journalism by an UnNews correspondent.
Retrieved from "https://en.uncyclopedia.co/w/index.php?title=UnNews:New_TV_trend:_cannibalism&oldid=5363041"
Categories: