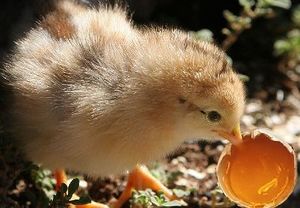 This is not a good idea.

PALO ALTO, California -- Scientist chickens have been investigating the chemical properties of eggs and have discovered a shocking truth: eggs can increase the chance of death in humans by 25%. Eggs contain the alcohol Chicanol which reacts with the acids in the liver and simplifies it to the hydrocarbon Chicane. This chemical then enters the bloodstream. After a while, several blood cells die.

The chip skin found on the bottom of fried eggs is caused by the Chicanol reacting with the oil or butter, depending on the cook's cholesterol levels, and converting the Chicanol to Chicane before it reaches the stomach. The Chicane irritates the tongue, tastebuds and throat, and therefore classifies as an irritant. The chicken-funded research also concluded that there is a significant likelihood that eating eggs may result in depression, headaches, rashes, brain tumors, leprosy, and impotence. Previously, the same group of chicken researchers concluded that a diet high in chicken meat was a major factor in obesity.

Chickens have concluded that eating eggs is bad for humans, and there is strong evidence from this study to ensure this. A more in-depth report is expected when one of the brighter peckers gets off the ESC key.

This article features first-hand journalism by an UnNews correspondent.
Retrieved from "http://en.uncyclopedia.co/w/index.php?title=UnNews:Chickens_discover_eggs_are_bad_for_humans&oldid=6047099"
Categories: