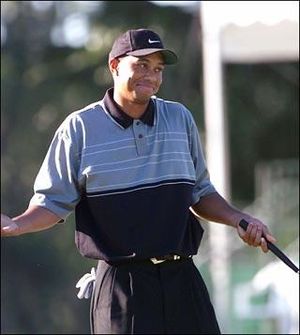 Mr Woods enjoying his favorite hobby, which is not eating fried chicken.

A 37 year-old black man has denied liking fried chicken, and has said comments that suggested he did were "hurtful and inappropriate."

Tiger Woods, from Cypress, California, heard Sergio Garcia, another member of his exclusive golf club, saying he would offer to cook him fried chicken as a way to make up for a recent falling-out.

Woods told a small press conference, "I don't like fried chicken, and because it's kind of cheap food, and a lot of black people like it, I can't help but feel [Garcia] was making some kind of reference to the slave trade or something."

At this point, an incredulous local black journalist asked, "Wait a minute. Wind it back there. Not even KFC?" to which Woods replied, "No". He did, however, admit he is big fan of white meat in general.

Sociologist Joanna Corey explained: "The world of golf is notoriously exclusive, and accusations of racism - either overt or covert - are always bubbling under the surface. Saying a man of color likes fried chicken might seem innocuous, but people from that club will know it's code for saying he's a dirty, bone-through-the-nose, walking-on-all-fours elephant-fucking African ape-man."

When we tracked down Garcia, he was suitably penitent: "I had a sick feeling in my body, I didn't sleep at all last night. I felt like my heart was coming out of my body, it has been difficult to hit a shot without thinking about it. The only thing I can do is say sorry.

"Obviously as a Spaniard, no one has ever suggested I like paella or tacos or whatever, and if someone did, I would completely blow it out of proportion as well."