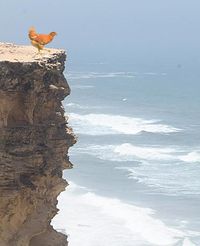 A chicken about to be Gravity-fucked

Chicken Fucking is any action involving fucking a chicken or involving any action that otherwise severely endangers or kills a chicken. Chicken fucking may be the result of many things, most namely Human Contact, Gravity, or Fire.

Adolf Hitler was known to fuck chickens, since he couldn't eat them.

The history of chicken fucking is a long and twisted one, but it is believe to have originated in Eastern Asia and moved to Europe. Chicken Fucking in East Asia around the time of Confucius was incredibly popular, and Confucius himself was known to have fucked chickens before writing onto Fortune Cookie-sized paper one of his many famous quotes, while laughing at the fucked chicken's misfortune.

Upon spreading into European countries, the Dutch took the tradition in with open arms, surprisingly enough as there was little room for Gravity-fucking chickens in the flat Netherlands. The stupid French also enjoyed fucking chickens, mainly by fire-fucking. The British saw the tradition disgusting and as such slaughtered all chickens humanely and eating them like any Briton would: with bad teeth and imminent death. 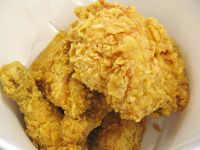 Gravity fucking a chicken is a common method of fucking a chicken, as it describes a natural phenomenon. For a flightless bird, the chicken is surprisingly aerodynamic while falling, and thus has a high terminal velocity, and very much sploding factor at the end of its fall. This long fall is commonly set into place by cliffs, retards with rockets, kitten-huffing aftermath, and so on. A misexecuted fall may result in a highly hilarious act of self-termination.

Once chicken-fucking spread into the American South, literal chicken fucking became a hit. It was a revival of bestiality and fun for the whole family, just like Las Vegas. In all seriousness, we would show you a picture, but the cameraman died before he had a chance to take a picture. You can give Ernie Anastos the chicken fucking cheerleader award after delivering a passionate word twister, telling weatherman Nick Gregory to "Keep fuckin' that chicken" live on WNYW. This led to instant YouTube popularity and a worldwide increase in chicken fucking incidents. Way to go, Ernie. You're really making FOX News look good.

Fucking a chicken by fire involves burning it, hopefully after gutting and defeathering it. This results in the all-powerful KFC. If the guts are not removed, and you start fire-fucking a chicken with a chicken that has yet to be fucked, it will smell bad, but burn bright. Do this if you are a pyro and pour some kittens on it if you wish.