MANCHESTER, England --British supermarket giant Tesco are under severe pressure to back welfare reforms proposed in order to improve the living conditions of their chickens. The proposals have been proposed by some upper-class chef twit who recently experienced a false sense of guilt since he used to go hunting them as a boy. 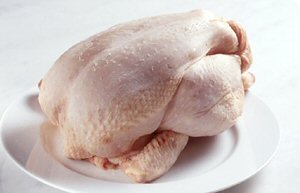 The chef has said that the chickens are expected to live in appalling conditions, "without minimum wage, free schooling, free health care or social security." Tesco's shareholders are set to put the matter to a vote, as they are worried about the increasing number of chickens who are deserting their farms. One poultry exporter commented: "I was disheartened when the amount of chickens to be shoved into the back of my lorry were decreasing day by day. I was nearly out of a job. The ones who had run away were only turning up as a roadkill a few miles down the road anyway."

Other proposals include the introduction of a progressive taxation system, whereby high-earning chickens will be taxed to fund Tesco - chickens with the most eggs therefore will be taxed more than those who are less productive. Members of liberal and anarchist factions have gone so far as to advocate liberalising immigration laws and advocate a form of animal multiculturalism, whereby chickens will be free to graze with cows, run with rhinoceroses, and charge with buffalos. Anarchists want to demolish the farms altogether. Both factions' policies are less popular however, as a trial at a farm in Africa showed that chickens were slaughtered fairly quickly, or mated with rhinos to produce a monstrous hybrid known as a rhicken, which could not be exploited as easily as the chicken, nor were its heavy eggs easy to transport. The anarchist policy of blowing up farmhouses ended up being detrimental to the chickens and the farmer.

The radical reforms have been already tried at a farm nearby Manchester for 5 years. The results of the trial were mixed. The farmer at the centre of the trial said that: "The productive chickens stopped being productive. The unproductive ones stayed about the same. But they all became very eloquent, and I have to let them have these socialist rallies once a month, otherwise I'm denying their freedom of speech." Farmer Johnson did not mention that some of the chickens ran away to indulge in free schooling and free healthcare to repair the scars of their imprisonment. One chicken has even managed to fasttrack through the whole of secondary school, and gain a diploma in management. This chicken is now assistant store manager of a Tesco branch in Cheshire.

Staff who work in Tesco's supermarkets accused their bosses of favouritism, and have been forming a society named People for the Ethical Treatment of Tesco Workers (PETTW), however this movement's progress and membership has been meagre, as they do not have a catchy enough acronym.

Some humans already feel that the passing of the reforms is inevitable, and are taking drastic actions: Paul Menton requested a transfer from the branch in Hull to a nearby chicken farm, citing better conditions in the farmhouse. Last week, Tesco employees from Stoke dressed up as chickens during their day-shift and escaped to a nearby farm, where they hope to be treated better.

Well, I've never been into a Tesco supermarket and bought a chicken anyway. I had it delivered. One of them £1.99 ones too.