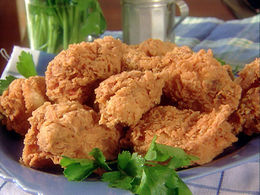 Chicken after the "photo-chicken" process

The Colonel's Eleven Secret Herbs and Spices are a group of eleven chemical compounds first theorized to exist in conjunction with one another by physicist Albert Einstein in the summer of 1941, though proof of their actual existence would remain lacking for several decades. In the early 1970s scientist Charles Sanders demonstrated their presence in solar radiation using his newly developed "photo-chicken" technology, though his results would eventually come under dispute. 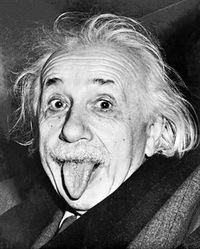 While working as a fry-cook at then dominant fast-food chain "Tennessee Fried Chicken," a friend introduced Colonel Sanders to the theories of Albert Einstein regarding the potential existence of a new set of herbs and spices previously undiscovered by man. According to Eintein's theories, the spices, if they did in fact occur in nature, should be observable as a force exerting a high degree of electro-magnetic pressure on gamma waves produced by medium to large-sized stars. However, the traces of such forces had not yet been observed as, at the time, no instruments existed which were sophisticated enough to measure the tiny variances in star pulses which would prove the spice's presence.

Sanders was fascinated by Einstein's theories, and quickly gave up smoking to remain in the kitchen of the restaurant during cigarette breaks to conduct experiments. Sanders started wearing a unique white suit, cane, and protective bow tie in order to protect him from the sometimes harsh radiation produced by his experimentation. Using a series of complex optical devices, hinging on the specific application of his own famous black-rimmed glasses, Sanders was able to begin focusing enough solar radiation to produce early and encouraging results in his quest for the spices. 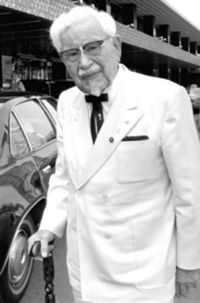 The Colonel in his protective gear

Sanders' breakthrough came in the fall of 1972 when a massive solar flare unexpectedly pulsed through the atmosphere, causing the hot oil in the kitchen's chicken fryers began to rapidly increase in volume, overflowing the vats. When the pulse was over, Sanders found himself crippled in one leg, his once lush brown hair frizzy and colorless. Sanders disassembled his equipment and was sent home from the restaurant.

The following morning, however, Sanders received a call from store manager to return to work immediately. After the long process of clean-up, Costello reported, customers had been phoning all evening to compliment the new exciting flavor of the chicken at the restaurant. Sanders returned to work, and began experimenting on pieces of the chicken. He soon discovered that the combination of solar gamma rays and chicken not only demonstrated the presence, but actually resulted in the isolation of Einstein's herbs and spices.

Sanders published his findings in the journal Nature and quickly rocketed to fame throughout the scientific world. Sanders received the Nobel Prize for Fast Food in 1973, and was met with a forty minute standing ovation after he offered everyone in the audience a tasty piece of his chicken, and a gift certificate to Chuck E. Cheese. However, it was not long before Sander's opponents went on the attack. In particular J. Robert Oppenheimer accused Sanders of faking his results, and demanded to know the chemical makeup of the highly volatile compounds. Sanders, not yet satisfied that such information was ready for publication, refused to present his results prematurely. The scientific fire-storm which ensued is known today as the "Louisville Incident."

Ashamed and worried about the possibility of negative publicity, Tennessee Fried Chicken fired Sanders in 1974. Shortly thereafter, Sanders became the first Nobel Prize winner to be stripped of the title and forced to pay back his winnings. The journal Nature published a full retraction of Sanders' claims the following Spring. Shamed and broke, Sander's decided to retire from the world of science, and keep the identity of the eleven herbs and spices a secret forever.

At the outbreak of the Falklands War, Sanders became determined to stand up for the rights of the people of Argentina and quickly enlisted in the Argentine military. Though initially commissioned as a cook thanks to his previous experience, the Argentine soldiers noticed that there was something extra-special about Sander's chicken, and requested it virtually every night. Sanders' knack for boosting troop moral did not go unnoticed, and Sanders was elevated to the rank of Colonel. Despite Argentina's eventual defeat, Sanders was honored as a hero, showered with garlands, and given control of 50% of Argentina's gross domestic product that year as seed money to begin a new restaurant venture in the United States. A mammoth statue of Sanders (now known simply as 'The Colonel') stands proudly to this day in Poulet Square, Buenos Aires. 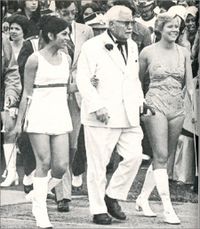 A Military Parade for the Colonel in Buenos Aires

Though Colonel Sanders originally hailed from Cleveland, Ohio, upon his return to the United States Sanders opened a new restaurant chain named Kentucky Fried Chicken. He devised the name in protest of his previous employer, and as a tribute to his love of Blue Grass music. Sanders insisted on the inclusion of his eleven herbs and spices in all the chicken produced at his restaurants, and within three years the corporation had grown into the world's largest business entity, eventually purchasing not only Tennessee Fried Chicken, but early rivals Ohio Fried Chicken and Northwestern Arizona Fried Chicken as well. Sanders continues to directly operate the chain to this day, finding time in his busy schedule as the newly elected King of Argentina to personally synthesize all eleven herbs and spices for all his restaurants around the world.

For those without comedic tastes, the so-called experts at Wikipedia have an article about The Colonel's Eleven Secret Herbs and Spices.

Nature of the Herbs and Spices[edit]

Many, however, contend that the spices do not even exist as stable compounds, and argue that even if added at the beginning of the fry process, their half-life is too short for even trace amounts to remain by the time the chicken is served. Recent research into this possibility conducted at McDonald's 'Burger College' has produced mixed results.

Over three hundred Documentary films have been made which explore the herbs and spices from virtually every conceivable angle. In 1999, cultural critic John Door commented that "No set of compounds has ever so captured the human imagination as have the Herbs and Spices of Colonel Sanders." NBC is currently planning a new 10:00 PM drama titled "Clucked Over" which will center on the experience of a chicken whose taste for the spices leads him into a life of cannibalism, and a spiral of guilt and self destruction. The Herbs and Spices have also been named the mascot of the University of Connecticut and are the official volatile food compound of the Vancouver Olympics.