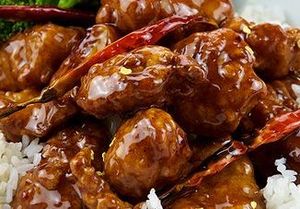 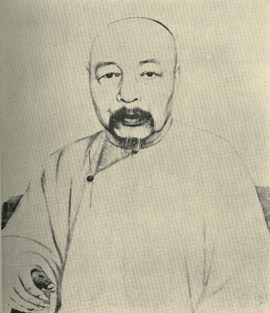 And this is the fellow known to us North American fans as General Tso. He died in 1884, back in the days of Davey Crockett, waaaaaaaay before anyone thought about Chinese restaurants. Hell, weren't Americans still hunting and gathering in those days?

It is unclear what is meant by the name. Wikipedia states that there has not been any affirmed connection between anyone named Tso who became a military general in China (namely the 19th century General Zuo Zongtang) and this particular food.

Any such food inventor named Zuo was most likely a father of a Chinese immigrant family living New York and running a Chinese take-out who, in 1977, named the chicken after himself (spelling it "Tso" like it sounds to English-speakers), and aiming for the appeal of the general public, called his dish "General Tso's Chicken", meaning, in his mind, "Tso's Chicken, Generally". 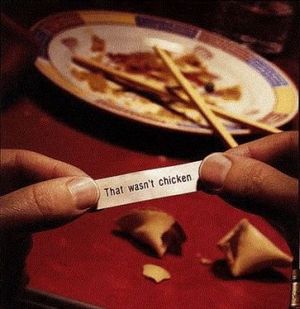 The fortune cookie that went with "Substandard Tso's Chicken".

Zuo made two other dishes named Substandard Tso's Chicken, and Excellent Tso's Chicken. "Substandard" tasted funny, and always came with a fortune cookie that said "that wasn't chicken." "Excellent" had, in place of the sweet and hot sauce, a noxious mixture of picante and red jalapeno sauces, which caused one to have burning stools, burning sweat, and even burning urine a day later. Both sauces are easily identified in a supermarket with a yellow and black "Biohazard" warning on the label.

General Tso's Chicken was given a positive review in the New York Times. Soon after, the FDA approved the "General" version, and placed it on its SFRE list (SFRE = Safe for Round Eyes). The other two were not actually banned by the FDA, but instead placed on its NSFRE list ("Not Safe for Round Eyes").

General Tso's chicken tastes sweet and hot. Depending on the restaurant, it is often served bland, and you need to ask to include a packet of hot sauce to make it taste hotter. After leaving it in the open air in the house overnight, it doesn't seem to lose its flavour.

The Food Chemistry and Biology of the Tso's Chicken Trilogy[edit]

Excellent Tso's Chicken comes with a hot sauce which acts as its own preservative. The hot sauce can be used as an industrial-strength sterilizing agent for surfaces and counter-tops, although a separate cleaning agent would be needed. Of course, the same sterilizing properties also kill the bacteria in your digestive system, giving you burning, runny stools. But it has been said that after a while you get used to it, and it becomes part of your lifestyle. They say that after a while your friends will get used to seeing skidmarks on your trousers, and the ridicule will die down after a few months. It has also been said that people will likely get used to the brownish yellow acid burns in the front of your trousers also.

Excellent Tso's Chicken has been used as an effective defense in germ warfare, particularly against anthrax and diptheria. This is because nothing can live in Excellent Tso's Hot Sauce. Recently, the hot sauce has not only been classified as a defense weapon, but also as an anti-chicken assault weapon. It is now well-understood in the poultry industry that a humane alternative to beheading chickens before butchering them is to simply throw Excellent Tso's Hot Sauce at it. First the feathers all fall off, then its neurological systems shut down, and it dies of suffocation, albeit painlessly. What's wonderful about it is that Excellent Tso's preservative properties preserve the meat.

For those without comedic tastes, the so-called experts at Wikipedia have an article about General Tso's chicken.

General Tso's Chicken has less staying power, being sweeter and less hot. As for the chemical makeup of the sweet and hot sauce that accompanies General Tso's Chicken, it is impolite to ask. The sweet and hot sauce had not enjoyed much success as a sterilising agent, though its low water activity and high sugar content, gives it about the same consistency and viscosity as jellies or marmalades, which have different preservative properties, and for different reasons. While nothing can live in the sauce used for General Tso's Chicken either, it is too sticky, and not attractive as an option for sterilising table tops or other surfaces.

Recently, news has leaked out that the U. S. Military has been testing the sauce as a semi-solid fuel for short-range missiles. The military found its carbon-based properties and lack of volatility an attractive option compared with other fuels like nitroglycerine. They were aiming a test missile at something thought to be a Loch Ness Monster in Lake Superior, but it went wide and put a hole in the roof of the Wisconsin legislative building in Madison, missing the lake by several hundred miles. The good news is that the General Tso's hot sauce still gave the missile a range of over 300 miles (480 kilometres).

Substandard Tso's Chicken could not be tested, as it was already delivered to the lab in a compromised state before testing. Lab workers found teeth, animal hair, and a hard chunky object which turned out upon much testing and DNA sampling to be part of a hoof which once belonged to a horse named "Lucky". This time, the fortune cookie said "That wasn't lucky."