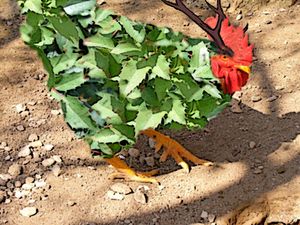 The Woodchicken, being very intimidating indeed. Oh dear God! RUN!!!
“Damn them! My childhood was a pitfall of Easter hell because of these evil... time to huff a kitten, sorry.”

Easter is seen by many foolish children as a time of joy and chocolate. But for those who are not careful it may be their grim demise. The Woodchicken is a bird which hunts down and consumes those unlucky children who feast upon the chocolate goodness of the rare, but oh-so-yummy 'Easter Egg'. Whether an experiment gone wrong or a freak of nature, the Woodchicken is ruthless and strikes as fast as a supercharged cheetah with paws made of lightning. Current sources yield litte hard evidence on this elusive killing machine, but some reports say, among other wild conjecture, that the Woodchicken does not have feathers, but leaves instead which grow from its body. Scientists speculate that a Woodchicken also possesses a pair of majestic antlers similar to that of a deer. Such a combination seems unbelievably bizarre, but it's all true. Furthermore, totally not-false reports of the Woodchicken date all the way back to the 19th century. 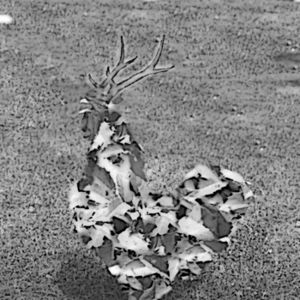 The photograph taken by William Handalbar Tash of the Woodchicken

In a recent event, a man called William McHandlebar Tash claimed to have seen such a creature roaming across his country estate. He photographed the creature, but it was disregarded by others and thought to be a fake, and resulted in an accusation of Mr. Tash being 'really frikkin weird'. If only they knew?! Two days later his son Timmy disappeared and the creature was never seen again. Coincidence?

Since then, no reports of the Woodchicken have been recorded (at least to the knowledge of the general public) and it was not until the sudden rise of children disappearing during the Easter holidays that caught the attention of the media. An investigation was launched into learning more of this creature, and some people came forward with their knowledge.

Mrs. Crane was one such witness. She and her husband lost their son during an Easter egg hunt in their garden. She described it as a warm sunny day, with a soft, cool breeze rustling through the trees. Or something. "The children were laughing and enjoying themselves. They ran all over the garden trying to find the chocolate eggs that me and my husband had hidden. I don't know when it happened, but my son disappeared and we found that all was left of him was his basket of collected Easter eggs...and his severed hand still grasping the handle".

The report is disturbing, and officials were horrified at the concept that so many children have been victims of such attacks.

Little Jimmy Taylor came running back to his parents during a similar Easter egg hunt, claiming that a large bird pecked him. Jimmy had bruises all over his body and was traumatized for weeks. Just when he went outside again, after not leaving his family's house for weeks on end, he disappeared. His mother heard his cries for help and ran outside. She saw the bird in the garden and photographed it before she was savagely attacked. Thankfully she survived.

All the reports claimed that they heard a bird call, similar to the crow of the common Chicken but calling the words "wood...CHICKEN"

Something had to be done. The local authorities searched the local rural areas in search of this Woodchicken, taking every precaution. They set a trap in a cleared area in order to see if they could catch the Woodchicken, but no such luck. They laid out Easter eggs, and to their mild bemusement, there was a Woodchicken. The Woodchicken, caught by surprise, attacked sergeant Millar and broke his arm and both legs, before retreating into the cover of the underbrush. They pulled out and immediately reported the incident.

“My God it was pure evil. It stood there staring at me. I noticed that I had melted chocolate on my fingers…”

We were later asked to leave as the nurses sedated sergeant Millar and restrained him. Sergeant Millar’s condition never improved and one Easter afternoon he smothered himself in chocolate and was taken by the Woodchicken. Although no one knows if the Woodchicken killed Millar or not, he was discovered with severe beak wounds to the face. 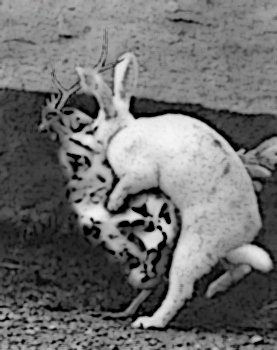 Photographic evidence of the sexual assault on the Woodchicken.

It appears that the Woodchicken is attracted towards the scent of chocolate Easter eggs, which would explain why the majority of attacks occur during the Easter period. The aroma of Easter eggs and children seems unavoidable by the Woodchicken, and, losing the little self- control their leafy heads contain, they go into a frenzy and attack. It is believed that the Woodchicken lays the chocolate Easter eggs, and attacks in order to protect its defenceless young. Some would say this is a clever ploy on the part of the Woodchicken, while others believe that it's a really dumb idea to use unborn Woodchicken-babies as bait. Such information was found amongst William McHandelbar Tash's recording book, describing a disturbing truth and more pictorial evidence.

We also recovered custody forms over the chocolate Easter eggs. They show that the Easter Bunny claimed custody over these eggs. The Woodchicken fought a 2 year campaign against this. Alas, the Woodchicken lost due to a history of alcohol abuse and a lack of funding, which isn't surprising since no-one in their right minds would give money to a chicken.

Could this hatred towards the Easter Bunny be the route of all this evil? We may never know.

Beware children and parents alike! This is not a creature you should ever approach or conflict with, it will kill you without hesitation! The signs of a possible Woodchicken incursion are in the form of its call. It's the only warning you will get, and probably the last thing you ever hear.