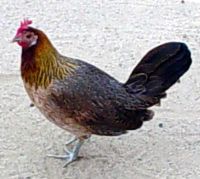 Scientists now claim that this is the victor of the paradox. The chicken's owner is reported to have said that he couldn't give a flying cluck about the paradox.

LONDON, Britain—Scientists in Britain appear to have found the answer to an age-old causality paradox.

Researchers at the Universities of Sheffield and Warwick have run elaborate computer simulations on giant mainframes using the latest chemical databases and physical chemistry analysis software. Their answer lies in a certain protein crucial to the formation of the eggshell, and the scientists' theories about the mechanism of the production of this protein points to the conclusion that the chicken came before the egg.

The response was mixed at best. Some expressed true appreciation for this latest result of science. Francine Jones of London commented, "I had to write an essay about this question for my science module, so I was going to ask on Yahoo! Answers, but I got this instead! So now I don't have to think for myself about this stupid question anymore!" John Smith of Notlob told us, "I saw this exact riddle for the billionth time on Yahoo! Answers, saying they really needed an answer because they had to write an essay for this science module assignment. I thought, oh great, I'm going to have to come up with this drawn-out, soppy, philosophical, ironic answer. But then I found this news item, so I just copied and pasted the URL! These researchers must be geniuses or something!" 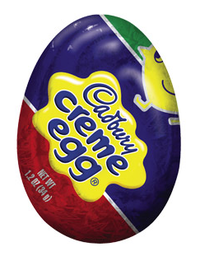 Even enhanced interrogation techniques could not get a word out of it, because for goodness' sake, it's an inanimate object.

However, many are voicing strong disapproval for the researchers' treatment of the issue. A spokesman for the Amalgamated Union of Philosophers, Sages, Luminaries and Other Thinking Persons issued a statement, saying that "it's not meant to be taken literally, you know. It's a causality dilemma, designed to spark ideas about the circle of life and the origins of the universe and the futility of probing circular chains of cause and consequence, and now you've gone and ruined it for all of us. Next time someone asks 'which came first, the chicken of the egg?', instead of deep philosophical contemplation about metaphysics and circular reasoning, we'll just have someone pull out his iPhone, search on Google for the answer, and say 'chicken! It's on Slashdot'. Next thing you know, these maniacs are going to build a computer trying to find an answer to life, the universe and everything!"

After seeing this statement, UnNews has sent an email questioning whether or not this was a statement of endorsement or disapproval, and has not received a response.

The chicken declined to comment. The egg also could not be reached for comment, as apparently word of the research results had caused it to take excessive amounts of LSD, causing it to be fried. UnNews was able to reach a Cadbury Creme Egg for comment, but got no comment because Cadbury Creme Eggs don't talk.