NEW YORK, New York -- Media attention to the Eliot Spitzer story suddenly dropped out of sight tonight, as a new more exciting story came to the attention of the fifth estate: a man's KFC had been mercilessly stolen in Manhattan! 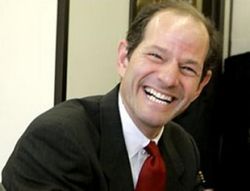 Eliot Spitzer, relieved that the scandal is over and he is out of the news, all due to the theft of some guy's fried chicken

The story broke late on the evening of Monday March 10, when the man, who we will refer to as Client-1, discovered that most of his KFC fried chicken had been stolen from the office refrigerator where it was stored.

Earlier this week the chicken was purchased at a Manhattan KFC. UnNews has obtained this exciting FBI transcript:

KFC Welcome to KFC how can I help you?
Client-1 I'll have a bucket of eight please
KFC Anything to drink?
Client-1 No thanks
KFC $23.31 please


Client-1 took the KFC back to his office, but discovered that after eating the biscuits, sides and two of the pieces of chicken, that he was full! He then put the rest of the chicken and the cardboard bucket containing it into the office refrigerator, not putting his name on it since he was humiliated to have purchased KFC and didn't want anyone to know it was his.

This proved to be a fatal mistake, however, as this resulted in the chicken being stolen by one or more unknown fried chicken thieves. Only one piece of the six remaining fried chicken parts in the bucket left by client-1 remains uneaten at press time, the remaining five being eaten by other people who did not pay for them, and who therefore got free fried chicken at client-1's expense.

This story has taken the nation by storm and threatens to become an issue in the presidential campaign. The whole issue of food in office fridges, especially tempting food such as fried chicken, remains an unsettled question. Issues such as "why do they eat unlabeled food if they know it's not theirs," related questions such as "how are we supposed to deal with that bitch who keeps throwing all the food out when it's still perfectly good" and "is Homeland Security doing enough to protect my KFC from terrorists who want to either eat it or use it as some sort of weapon of mass destruction?"

Thankfully the Spitzer story is now back under the carpet as a result of being forgotten due to the much more important chicken issue, leaving Governor Spitzer back in the driver's seat and free to resume banging 19 year old women for money.

In a massive reversal of fortune, the FBI, CIA, NSA, NASA, DOS, DOI, ETC have determined that it was in fact Spitzer who stole my chicken, and ate it with his filthy hookers. Pressure is back on the embattled governor to resign. Since it's his last week he's liable to do something crazy so look out, he might invade New Jersey or something.