From Uncyclopedia, the content-free encyclopedia
Jump to navigation Jump to search
“I wandered lonely as a cloud, that floats on high o'er dales and hills, when all at once I came upon a shitload of golden daffodils.”

The Load is the basic unit of a measurement scale that differs from Imperial scales by being imprecise. It was created for those times when accuracy is unattainable, for reasons of either time or laziness.

Think about it: how many times are you asked to quantify something you have no intention of measuring exactly? No idea? Good! That's precisely why this scale was invented. It allows people to convey easily a sense of the scale of whateveritis they were asked to measure without going through the tedious business of being exact about it.

Although it can't be exactly measured, that doesn't stop people trying

The quantity defined by a "load" is not determined not by numerical prefixes, but by various words, such as Shedload, Fuckload etc. Instead of being related to measuring a specific substance or property, it can be used to quantify pretty much anything. For example: there are a Shitload of articles on Uncyclopedia, and an Assload of them are vandalised on a daily basis.

The scale is based on the rule that the more offensive the quantifying word, the larger the amount. It therefore starts off with inoffensive words, and slowly rises from there. Theoretically, the scale is infinite, as offensive words can be strung together to create ever increasing quantities

However, the most used and recognised quantities, in ascending order, are:

The base unit. Just a few. A small amount. A handful. Very little. Next to fuck all. Hardly any is what we're trying to hint at here. The lack of any form of profanity denotes a disappointingly small amount - the amount of sex the average Uncyclopedian has actually had, for instance, or the amount of people who still actually believe OJ didn't do it.

At last, a profanity of sorts - now we're getting somewhere! This is quite a decent amount - not gargantuan (after all, they can get away with it on the radio these days), but not to be sneezed at either (your gran probably still doesn't approve of it). The number of extra faults the mechanic discovers on your car while it's in for a routine service is a fair approximation.

Moving into more serious territory now, with a word that many older relatives would hesitate to use in front of kids - this is a quantity not to be taken lightly. The number of explosions in a Michael Bay movie is a good example, or the amount of empty promises the average politician makes in an election campaign.

This is getting seriously big now, there can be no argument about this, shit is not a word to be used in polite company, so it obviously refers to a very healthy amount indeed - think the size of alimony payments of famous movie stars, or the number of lawyers in Hell.

The criticism received from the words in the Load scale varies by a roughly equivalent amount, in that the higher in the scale the word, the more it is frowned upon. Although, this can also vary depending on the company with with it is used. 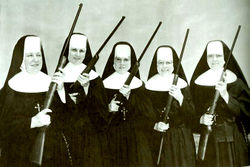 A fuckload of nuns

Fuckloads, shitloads and assloads should not be used among nuns, preachers or school teachers. As they would never dream of using such language themselves, they scale means these words quantify, to them, unimaginably large amounts, and attempting to visualise this could well give them a headache. Usefully, the lower end of the scale is proportionally increased by their genteel standards, so that a crapload to these people represents a fuckload to most normal folk.

Conversely, using "load", "shedload" or "crapload" among friends, gangsters or other hardcore people is not a good idea. Not only will it drastically lower your street cred, but the scale is diminished among such people due to their familiarity with the terms. The equivalent of a fuckload for these people is likely to be a goddamn-motherfucking-shitty-ass-cuntload, or something similar.