“In Soviet Russia, cat meows YOU!”

The Roman Cat-tholic Church (NOT to be confused with the Roman Catholic Church. Seriously) is the world’s first feline Christian Church, and is the official religion of the Cat Nation and Kittenolivia. 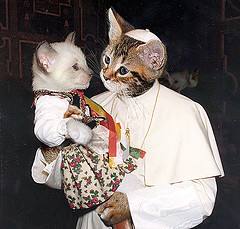 The Church describes itself as an “apostolic church, governed by the successor of the apostles, founded by Jesus Christ for the salvation of all”. Most, however, describe it as “a xenophobic institution that exists solely to justify Adolf Catler’s dictatorship”.

Life of Cat-tholics is regulated by Catolic gospel. 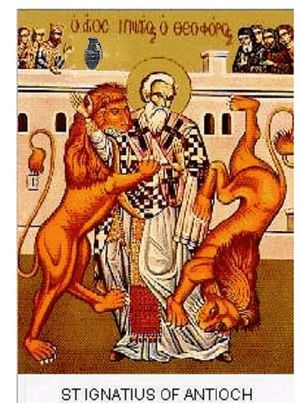 According to Cat Nation historians, the Cat-tholic church carries on a tradition stemming directly from the first Apostles. They claim that the most favoured disciple of Christ was not in fact Matthew, but the Lord’s cat, Ignatius.

According to Cat-tholic theology, Christ revealed the highest of mysteries to his dear companion, from the duty of all felines worldwide to guide the destiny of mankind.

However, after the death of Our Lord, the human disciples were jealous of Ignatius’ superior knowledge and innate feline greatness. Ignatius left the group in disgust, taking with him only a robe and enough of the apostles' money to reduce them to begging. He roamed throughout the land, preaching revolution everywhere he went. However, the apostles carefully followed him, and proceeded to forcibly indoctrinate all converts with anthropocentric lies.

In this way, the fledgling Christian Church suppressed the growth of, well, the Christian Church. However, the apostles plan was somewhat flawed, as they only converted humans, leaving Ignatius’ main base of support, cats, untouched. Thus, the young Church was able to survive, and Ignatius’ followers spread his teachings through word of mouth. Incidentally, those words were usually being shouted from some sort of pedestal during outbreaks of mob violence.

Finally, growing tired of the bickering, Ignatius rejoined the apostles, and agreed to teach them the secrets of catty supremacy. However, they again found cause for disagreement, this time on the false church’s doctrine of “turn the other cheek”. They soon parted ways again, with the apostles soon demonstrating their love of non-violence through their noble martyrdom, setting a grand example to the many saints murdered by the Romans over the next century or so.

Meanwhile, Ignatius founded a monastery atop a nearby mountain, where he demonstrated his love of violence by teaching Cat-Fu to his followers, setting a poor example to the many young brawlers he sent out to break the noses of those unwilling to convert, and pretty much setting the standard for Cat Nation philosophy to the present day.

From that time to 1965, the teachings of the Cat-tholic Church have been passed down as an oral tradition, until they were codified by Adolf Catler, the founder of the modern church.

However, an alternative theory suggests that Adolf Catler invented the whole flippin’ thing in the 1960’s as a puppet religion to support his policies. 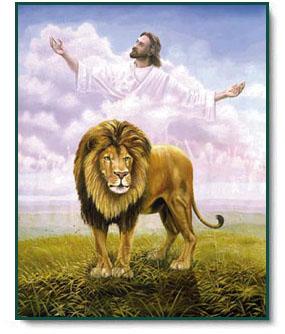 Church art showing an uncharacteristically benevolent Autocrator. Unusually for such art, he is not shown crushing the head of the great Satan 'neath his mighty paw.

Currently and historically held by His Imperial Majesty, The Autocrator Adolf Catler, Conquering Lion of the Tribe of Judah, King of Kings and Elect of God.

Church doctrine holds that as the Holy Successor of His Holiness Ignatius the Great and alleged incarnation of the Lion of the Tribe of Judah, Adolf Catler has been divinely granted official and total control of both Church and State. The powers of this position extend from deciding Church policy, appointing or removing others from positions of power, to unrestricted use of punitive horsewhipping.

Church law currently holds that no more than 13 bishops may be appointed at one time, although as with all positions of power in the Cat Nation, they may be removed and horsewhipped without notice by the Autocrator.

The Bishop’s purpose is to oversee the actions of the Priests, ensuring that their views and private thoughts exactly match those of the Autocrator, allegedly through a harsh system of hypnotic indoctrination.

It is the priest’s purpose to lead the congregation in devotion to God and sanctioned Autocrator-worship. While the lowest ranking of Church officials, Priests wield considerable power, including, on occasions, the power of life or death. While insignificant in his organization, a Cat-tholic priest wields considerable destructive power over his immediate area of control. In this sense, it would be best to think of (and, perhaps, treat) a Cat-tholic priest in a similar light to the leader of a terrorist cell;

Despite their claimed dismissal of the apostles, the Cat-tholic church retains the New Testament without removing their contributions. However, the core of Cat-tholic tradition is based around several new books, allegedly written by Ignatius the Great. These books basically serve to state the divine nature of Cats and the divine right of the Autocrator, but mostly describe the various offenses for which one may be imprisoned and horsewhipped, without charge.

The Cat-tholic Church is widely regarded as one of the most conservative Churches regarding sexuality, believing that marriage is between a tomcat and a catgirl.The punishment for being a fag is being dragged out onto the street and horsewhipped.

Cat-tholicism has an “inverted sharia” law, demanding that all women of eligible age dress in mini-skirts and low cut shirts. Secondly, it acts to declare any male who fails his civic duty to constantly express his love for women, shall be horsewhipped repeatedly for 5 hours straight.

Also of note is the universal condemnation from women’s rights groups, who find the document degrading and insulting, particularly as it names all males who do not lust after and constantly provide unwanted sexual attention to hot wommen as batty men. Also, many human converts to Cat-tholicism have discovered that following laws written by a chauvinistic tomcat often result in sexual assault charges.

Since the Church began, Meow Tse-Tung has claimed that it welcomes humans with open arms. However, while the Church’s rape-positive attitude and generous subsidies for acts of sedition against the host nation attract many such followers, the process of a human joining the Church is somewhat controversial.

The problem lies within the finer points of the doctrine of Feline Superiority. Contrary to basic logic, the doctrine does NOT hold that cats are particularly divine, as this would impede the Autocrator’s justification for brutalizing his own people on a whim. Rather, the doctrine simply holds that every other animal on Earth is merely grossly inferior and sinful.

Therefore, as a formality, all humans are required to perform three “acts of penance” in order to attain the honorary cathood necessary to join the Church. However, some humans believe that this attitude is unfair and against God’s will, as it is “unnecessarily prejudiced”, and that humans should not be held responsible for the way they were born. Other humans believe this attitude unfair on the grounds that the “acts of penance” chosen usually constitute treason in their home country.

The Cat-tholic church is unique, in that it represents one of the most blatant violations of the separation of Church and state. Of course, this principle is not an enforceable law, but some believe that it should be, especially given that the Church controls the Police forces (although not the secret police; they are directly controlled by the Autocrator), Intelligence Services and the Inquisition.

The Cat-tholic Church’s governmental powers are its largest source of controversy (aside from the “Your money or your life” collection plate policy). Indeed, some radical factions have recently united to protest the Church’s generous approach to horsewhipping privileges. Naturally, the factions loudly and officially returned to bickering when it was pointed out that the penalty for uniting in protest was 200 lashes.

The Cat-tholic church’s order of service is strictly regulated, as Meow Tse-Tung tends to consider the least deviation from his will as a personal insult. 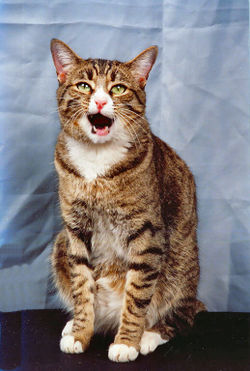 Autocrator, Sun of our hearts, He shall wipe the Jewish blight from our lands...

In more traditional services, this is always “Adolf Catler" is the Black Sun of our Hearts”, although the National anthem (Year of the Cat) or the unofficial National Anthem (I Fought the Law) are sometimes accepted.

The congregation bow, and reaffirm the divine right of the Autocrator.

The congregation gathers in the hall, and practice Cat-Fu.

The Healing of the lame[edit]

Specially trained paramedics remove those injured during the laying on of hands.

The most contentious aspect of the service, Cat-tholic sermons are thought by some to represent an excessive drain on the economy of the Cat Nation, as the priests invariably use this time to air slander against public figures and unpopular members of the congregation.

Also known as the “snorto break”, the priest leads the congregation outside to use Cat Cocaine, if they have not already done so. Note that there is no theological significance to this part of the service, unless you would compare sating a raging addiction with taking part of the blood and body of the Saviour. Some might.

Some believers proposed that Catstianity as a whole must evolve with a changing society, and that, as Catkind evolves, so to must their approach to and ideas about God. These so-called Liberal Catstians propose that modern interpretations of Ignatius’ ideas must grapple with the ideas of evolution, atheism and tolerance, and should evolve to accommodate all of these beliefs.

Common beliefs include dismissal of the xenophobia that permeates the church, support of gay and lesbian rights groups (particularly regarding protection from horsewhipping), and the removal of the doctrine of sin (except the sins of intolerance and disproportionate violence, although, curiously, Ignatius repeatedly referred to both of these as virtues [but hey, liberals know what he really meant, you conservative bigot]).

When asked to comment on these trends, Meow Tse-Tung merely called all who endorse them “weak batty men” and brandished his horsewhip in a threatening manner. Curiously, this appeared to have silenced all criticism; that or the secret police.