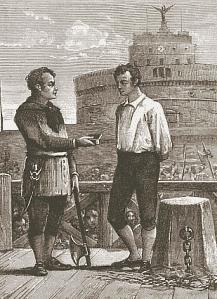 ~ Giovanni on his latest victim

“Come on Gio, hurry up! Hang that errant swine and let's go for a pizza!”

Giovanni Battista Bugatti was the executioner of the Papal States from 1796 to 1865. His official title was The Holy Bloody Servant of God and Sender of the Sinners in Hell (latin: Sancti Sanguinum Servi Dei, Mittentis de Peccantium in Inferno). He carried out a total of 516 executions and held the Guinness World Record for many decades.[1] He was nicknamed Master of Justice, Saint Grim Reaper and Pope of the Executioners.

Giovanni was born to Giuseppe and Giuseppina, a typical Italian couple. His father was a grave digger and thus young Giovanni came too close to God (and death). He enjoyed watching thrillers, despite his mother's disapproval. Giovanni especially loved the Saw series, as well as all-time classics, such as JAWS and The Shining.

Growing up in such a religious environment, little Giovanni wanted to be a priest. He actually wanted to became an exorcist, inspired by Hopkins' performance. Both his parents encouraged him to fulfill his dream. Giovanni studied a lot at Wheeling Jesuit University and was among the top of his class. However, he didn't manage to pass the oral exams, because Father Fred's thing was too disgusting. Dispirited, he became a pastor in Alaska and lived there for a couple of years. 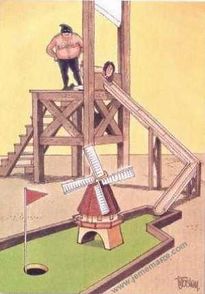 Bugatti lifted executions to another level

Giovanni didn't like it up there, as we all know that Alaskan pasta is terrible.[2] And of course, a real Italian can't live without good spaghetti, capito? Hence, Giovanni left Alaska and returned to his beloved Vatican City. Initially, he worked at his father's business. After a while though, he was offered the position of Pope's official executioner, because the old one retired and went to Barbados.[3] Losing no more time, Giovanni proved to be a prolific executioner. Such was his zeal, that he asked from the Spanish Inquisition to teach him how to be extremely evil and religious at the same time.

Giovanni was capable of executioning someone, by many different ways. Up until 1810, his methods of execution was beheading by axe, hanging, smashing with a mallet or shooting with AK-47. He knew more than 30 types of knots and had a broad collection of swords, in order to make his executions more amusing. After the French Revolution, the use of the guillotine was introduced, a device he immediately loved. On his crossing the alleys, the residents of Rome were alerted that an execution was about to take place and people would gather to witness the popular event.

Giovanni kept beheading and hanging for a long long time, until he was retired by Pope Pius IX, at the age of 85. In return for his useful and pious services, he was given a pension of 30 scudi ($1000.π) per month. Not bad at all! Giovanni died at the age of 90, after a pepperoni stuck in his throat. His blood-stained clothes, axes and guillotines are on display at a haunted museum in Rome.

Bugatti is described as being short and portly, and always well dressed. He prefered Italian brands of course, such as Armani. He frequented the church Santa Maria di Traspontina. However, he could not leave his neighborhood unless on official business. This was for his own protection, in case relatives of those he had executed decided to take revenge against him. He was married but had no children. When not carrying out his official duties, Bugatti and his wife sold painted umbrellas and other souvenirs to tourists.

For the religious among us who choose to believe lies, the so-called experts at Wikipedia have an article about Giovanni Battista Bugatti.