For those without comedic tastes, the so-called experts at Wikipedia have an article about Hubert Horatio Humphrey. 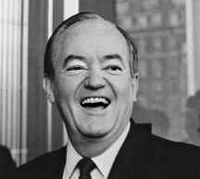 A candid photo of Triple H in his youth.

“The greatest 38th Vice President this nation has ever had!”

“Good God! He may have just broken that bill in half! Can anyone stop his filibuster?!”

“You people voted for Hubert Humphrey, and you killed Jesus!”

Hubert Horatio Humphrey, better known as Triple H, was the 38th Vice President of the United States. He served under Lyndon B. Johnson better known as LBJ or JBL. During his reign as Vice President, Triple H would be known as one of the most openly viscous politicians ever. He is also well known for his professional wrestling career which lasted from 1948-2056 in which he claimed over 9,000 World Heavyweight Titles. In 1981 Humphrey invented the Metrodome in Minneapolis.

Born in a small town in Connecticut Hubert spent the majority of his early life training to become a boxer. This career choice was inspired by the infamous boxer rebellion of China. Hubert was training with Rocky Balboa until Rocky left him to pursue the filming of Rocky 18: Fight for Middle Earth. Hubert was left all alone with no trainer and was forced to train himself. This was done by beating up little kids and then stealing their lunch money. This skill to beat people to a bloody pulp was noticed by several minor league wrestlers in the Minneapolis area and thus Hubert was sent to train and wrestle with the Twin City Wrestling Association (TCWA).

Hubert started off as a jobber his job was to lose matches against other high-profile wrestlers who needed a boost in popularity. However, after having been forced to lose eight straight matches Hubert broke a deal he had struck with a writer and pinned his opponent Marvin Kline. The writers for the show finally stopped asking Hubert to throw matches and thus Hubert went on an undefeated streak in the TCWA eventually winning the television title from Scott Chadwick. Not a single person on the TCWA roster could beat Hubert and thus Hubert demanded a trade to the WWE where he could face more prestigious opponents. In June of 1960 he vacated the television title and left Minnesota for the WWE.

Triple H's solution to all his problems, SUCK IT!

Hubert appeared in the WWE under his middle name Horatio there he quickly got on a roll only losing a few matches and even pinning such iconic superstars of the time like Richard Nixon. Hubert then created the wrestling stable Degeneration-W a radical stable which promoted equality and fairness for all races and ethnic groups along with Lyndon B. Johnson, JFK, Bobby Kennedy and Rev. Martin Luther King. The stable was the dominant force in the WWE for around one year, that was until current General Manager Nikita Khrushchev forced the stable to break up. Then in 1963 Hubert found more trouble after he became the number one contender for the United States Championship Hubert would have to defeat the legendary Joseph H. Ball in a steel cage match. At the Pay-Per-View Joseph fought hard but Hubert was able to break Joseph's legs when he tossed Joseph's right leg into the cage walls. After that Hubert applied his Select Committee on Disarmament submission hold and Joseph tapped out like a little pussy. A month after the title was won Hubert took a surprising heel turn and began to use foreign objects while the referee was down to win matches. In a controversial interview segment on a live taping December 5th, 1965 before a match with Mike Mansfield Hubert said to audience members

[[File:TripleH-SledgehammerBW01.jpg|thumb|Herbet Had Sex with his sledgehammer and then a new born mallet was born and he fucked up sian masih Hubert returned again as a heel now he had established an infamous foreign object to use when he wanted to cheat. This was a sledgehammer which he named Mjöllnir. The weapon had already injured superstars Marvin Kline and Eugene McCarthy. He also had dawned a new name instead of Horatio now calling himself Triple H. As Triple H Hubert won the Intercontinental Title ten times and the United States championship three. He also won the Tag Team Championships with partner Lyndon B. Johnson. The Tag Team reign lasted for six months but Hubert turned on Lyndon in the middle of a match for the title for $15,000 dollars (offered by Walter Mondale) and thus the tag team broke up. This path of destruction continued with Hubert often being jeered by fans except in his home town of Minneapolis in which he won the hardcore title which he only held for two weeks. Once, Hubert hit himself with the sledgehammer on his nose,causing it to expand 100,000,000 times it's original size. 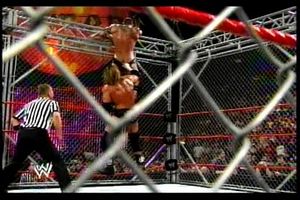 Triple H's attempts to make Orton's victory, a naked and embarrassing one.

Triple H would go on to wrestle from 1968-2056. He played a big part in the Monday Night laws from 1997-2001 in which 18 million people were killed by Hulk Hogan. During that time period he won five WWE championships. Then in 2001, he fucked and married Vince's daughter, Stephanie McMahon who was pregnant by her father . From there on out he would pretty much get whatever the hell he wanted. He would go on to collect over 9,000 World Heavyweight Championship Titles (effectively surpassing Ric Flair's record of 17 world titles). He would have many exciting feuds against the Wu-Tang Clan, RVD, Chris Jericho, Scott Steiner, Kevin Nash (okay maybe this feud wasn't that exciting... ah who am I kidding, it sucked ass), Gendo Ikari, Bill Goldberg, Darth Vader, Shang Tsung, Albert Wesker, Jesus, Vin Diesel, The Geico Gecko, Chuck Norris, The Rock Goku Brock Lesnar Broccoli Broly Majin Buu Mario Sonic the Hedgehog Stephen Harper Barack Obama Vince McMahon Godzilla Solid Snake Michael Jackson Batista Annoying Orange and many other unforgettable opponents. [[File:Ortonthrow.jpg|thumb|Triple H shows he is all man.]] His homosexual reign would last to 2056 (which up to that point, TNA still couldn't beat the WWE in the ratings due to Triple H being the most entertaining champion of all time). At Wrestlemania XXX Triple H fought in three Fatal 8 way Elimination Chamber matches in which he defeated 24 of the company's best wrestlers and effectively bring his championship reigns to 9,000,000,002 (he fought in three matches because after the first two he was stripped of the belt and forced to fight for the belt again, which H did with no problem). Then when all seemed lost, Liu Kang (whom had won the Money In The Bank Ladder match earlier in the show) showed up and announced he was cashing in his Money In The Bank briefcase to challenge for the belt. In an epic battle, Liu Kang finally defeated Triple H and won the World Heavyweight Championship belt. Following the match, Triple H began to emit smoke and vibrate wildly, and turned many different colors. Then a few seconds later, he turned into stone and exploded (much like Liu Kang's longtime nemesis Shao Kahn did before him). After that Triple H's soul went into another dimension, ashamed by his defeat at Liu Kang's hands. William Regal, King of the 300th dimension, has spent the last 90 years insisting that Triple H's real name is "Triple Big nose." No proof of this exists, but it is fucking funny and it's highly unlikely that anyone will come up with any. Ever.TIME TO NOT play the game.... Triple H AKA Mr Sneezerman would chop his quads and Weenie and Shout Suck It with Shawn Michaels

Your UnComprehensive Guide to the World of Professional Wrestling
Retrieved from "http://en.uncyclopedia.co/w/index.php?title=Hubert_Horatio_Humphrey&oldid=5963373"
Categories: