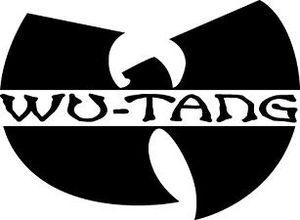 The Flag of the Wu-Tang Clan, now recognized as both a nationless state and a major world religion.

For the uncouth among us who choose lies, the so-called experts at Wikipedia have an article about Wu-Tang Clan.

The Wu-Tang Clan is an elite group of ninja revolutionaries and mind control cult, under the leadership of reverend Bob Diggs, that arose in the early 1890s to challenge the authority of the various secret societies ruling the world, including the Illuminati, the Freemasons, Newscorp and the Spanish Inquisition. The Clan pledged to free the world from impending doom and usher in a brave new era in which everyone will be stoned, wear their own clothing line and talk in incomprehensible but nonetheless impressive speech, a.k.a Wu Ebonics. 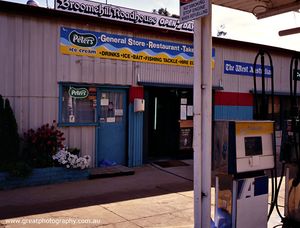 The name "Wu-Tang" comes from a Chinese mountain, whose name literally translated meant "Great Hill that is nothing ta fuck with". Not to be confused with the common internet expression of when you've just received a tasty powdered orange drink (*w00t*Tang!)

Their methods of fighting include Shaolin Shadowboxing,Wu-Tang sword style, as well as a vicious type of torture creatively named Torture, nigga... Torture!. They recorded the E.P. "B-Dale Ballin'" With central Pennsylvania Hip-Hop/Rock group West B Dale. Who consists of Dj Durtay Mittins and Greez-E Fingaz. The E.P. was an underground Rap hit and was certified Gold by the RIAA.

There is some debate as to whether or not they actually invented the martial art Tiger style,

It is more commonly known by the Wu-Tang as"Tiiigaah Style!". As of yet there is only one student who graduated to Wesely SnipesBelt of the ancient Tiiigaah Style. Mostly because the Wu-Tang Clan has deemed it too "ass rancid dangerous to be taught to just any sucka." That man is the eternal emperor of Thailand, who then used his power to shove tigers up womens asses around the world. (See what they meant, too dangerous)

RZA in New York City to discuss The Tao of Wu.

It is, however, plausible that anyone can learn the ways of the southern-style Tiger...um..er...style.The southern style differs from the northern style in that it is based on focusing rage rather than spamming cheap projectiles at someones chest and knees. It is simliar to bojutsu, however the practitioner will go ape-shit on the person with a five iron instead of a stick.

It was rumoured that only a select few would be able to learn the rest of these methods. All others who tried would be subject to travelling to the 4th Chamber never to return. The rumour was proven trued in 1992 by Stephen Colbert and his team of Lindsay Lohan clones... all of whom did not survive.

Charismatic leader of the Wu-Tang Clan, RZA, describes the group's philosophy as so: "It was Grandmaster Flash and Huey P. Newton, the true older gods, who showed the people of Earth the math of the 26th dimension which proved that all Rap was meaningless, and that the world was calling for the Wu with desperatation <sic>. Realmatizing <sic> this, I gathered from all people on earth the most mythical of all the mythic mathematic martial artists for an ultimate competition. The winners of this competition were chosen to form the Wu-Tang Clan. The Clan, along with all the suns, moons and gods, built the 36 chambers to contain the truth of the Grandmaster and Huey P's mathematics, all 26 dimensions plus room for 10 extra dimensions". In response to this, Wu-Tang fans unanimously responded, "Huh?"

Speculation has recently risen that Barack Obama will appoint the Wu-Tang Clan to become his Cabinet. At this time is is unknown which positions each member will take, only that Raekwon will be subjected to becoming the White House cook and that Method Man will be sent to help interrogate prisoners held in guantanamo bay.

Since their inception, the Wu-Tang Clan has grown to a point where they are considered "their own pingas" Fo' rizzle.

The entrance to the Wu-Tang is next-door-but-one to the butcher's on Walnut Street, Staten Island. According to legend Raekwon discovered this entrance by accident one day when he was building some Cuban links out of Lego. The story goes that 'The Chef' had run out of red Lego bricks and was attempting to procure some more from a local 'Horse Nigga' round the back of the butchers when he tripped and fell into the Wu-Tang entrance. This has been noted as one of the biggest coincidences ever, as Raekwon had been looking for such an entrance a year previously, but had given up after becoming distracted by eating some Ben & Jerry's ice cream and being so impressed that he had to write a song about it. Since this day, the group has put up a spiffy neon sign that makes it much easier to find.

In 1997 the Wu-Tang Clan became immortal. Apparently this was achieved via some secret process which involved Ol' Dirty rubbing moonshine on his fellow clansmen's asses, after which he traveled back in time to the late 1970's to do battle with a kraken in Lake Placid, New York.

Whilst Ol' Dirty was in the past, he also found a moment to interrupt the 1979 Oscars. During Francis Ford Coppola's acceptance speech for the Best Dressed Heathen Award, ODB grabbed the microphone and loudly proclaimed that "Wu-Tang is for the Railway Children!", before setting fire to Dustin Hoffman's curtains and running off cackling into the night.

In 2000 the Clan decided to erect a giant W in Central Park, Manhattan so no-one would forget what the 23rd letter of the alphabet was. Ghostface and Raekwon painstakingly constructed the W out of palm Trees whilst RZA dug a huge pit and filled it with gravel to use as the base. Within the gravel pit they buried 5,000,000$ and told their extremely good friend Jimmy Durante about the cash and he proceeded to drive himself off of a cliff in the desert. Somehow Milton Berle, Ethel Merman, and Mickey Rooney found out from Durante, and upon taking a Mad Mad Mad Mad Mad quest across the country they were greeted by The Entire Clan who proceeded to employ the Wu-Tang Sword Style, flying guillotine, as well as Shaolin Shadowboxing to dismember the washed up Vaudevillians.

Unfortunately the W was turned upside down by vandals in 2004 and now looks like an M, the 13th letter of the alphabet, resulting in all round bad luck for the group (as well as the symbol for a California based Mexican gang of prison hoodlums). This incident angered Ghostface so much that he changed his alias from Pretty Tony to Furious Tony and spent several months punching a hole through Ben Stiller's pancreas. Raekwon was less annoyed and merely walked around looking slightly miffed for a week or so.

It is also rumored that the W was intended to pay homage to George W. Bush, who is part of the Illuminati. This was done in order to protect the interest's of the clan, such as Ghostface's coke smuggling business (refer to Fishscale album cover).

Iron flags are believed to be the tenth most useless objects in the universe. Little is known about the reason behind Wu-Tang's purchase of the world's biggest iron flag in 2001, but the decision to donate it to a local Burger King was hailed as a tremendous act of selflessness until the flag fell on two children two days later, crushing them instantly (along with their Whoppers).

It appears that Inspectah Deck was asleep at the time of this generous hand out (as well as the tragic crushing), but when he woke up and heard the news he was compelled to rush out and buy several biographies of Benjamin Disraeli and read them at high speed. He was so impressed with Disraeli's political genius that he was moved to set up a modeling agency - Urban Iconz Models. Mostly females are selected, but all the hermaphrodite models are hand picked by Inspectah Deck himself.

Following Ol' Dirty Bastard's ascension to heaven, the Wu-tang Clan reformed to produce 8 Diagrams. Unleashing long held secrets of The Beatles, these diagrams are now considered some of the greatest works of art ever produced with Denny's placemats and Crayolas. Jesus, the guitarist from the Red Hot Chili Peppers also appeared on the album. Rolling Stone magazine voted 8 Diagrams the most likely album of 2007 to be used as a doorstop. The prediction was correct.

The Secret of the Wu-Tang Clan[edit]

Nice try. We will never reveal the Wu-Tang Secret.

Now please note that this is the punishment for simply wishing to try to attempt to reveal the Secret. Method Man is one of the less violent members of the Klan. Ghostface Killah caught Indian Jones trying to unravel the puzzles in the 36 Chambers of the Sacred Temple of The Wu in the Slums of Shaolin. Ghostface came up behind Dr. Jones and used a rust katana to slice open the poor adventurers back. He then proceeded to peel back his sholderblades and rip out Indy's lungs. Ghostfaced used a combination of black magic and awesomeness to kepp Kones alive and completley awre while all this happened. He then ripped off every single finger and toe nail off of Jones and proceeded to shove them into his urethra. Jones screams and begs for mercy could not make him stop. Next Ghostface fed Indy his own stomach while it was still attatched to him. He eventually swallowed himself and seased to exist. Except for his lungs wich where lying on the floor and got fed to Cappadonna, Ghostfaces pet.

However this was not sufficient for Ghostface. He resurrected Indian Jones. Now, what happened next is much worse than what happened earlier, so the faint of heart should not read on. First Ghostface forced Indy to watch Kingdom of the Crystal Skull 69 times non stop. Then he brought in Short Round and beat him with a spiked bat like BLAOWWW! while jones watched. Shortrounds corpse was then turned inside and fucked by Cappadonna through the inverse b hole. Jones, unable to handle the horrible horrible fate of Short Round asked if he could be tortured again instead of his friends. But then Ghostface brought in Marrion from the first movie and had sex with her. It was consensual but Ghostfaces penis is so massive that when inside it literally ripped her in half. Jones sat chained in the corner trying to kill himself. Ghostface would have none of that and began a practice known as lava borading. When that was done he summoned Satan to take Indy to hell for awhile so Ghostface could go make Fishschale. When that was done Satan was relieved of his torture mothafuckka torture dutties, and Ghostface was back to fuck up the good doctor. Indy decided that he had only one possible way to escape torture, or at least feel deaths sweet embrace. He challanged Ghostface to MORTAL KOMBAT! [2] Indiana knew that he probably had no chance but could at least die honorably. As Ghostface showboated infront of the weak human, Indy pulled out his pistol and shot him in the face. Ghostface only laughed as the bullet passed through his ghost face. He then proceeded to beat the shit out of Dr. Jones. One man who saw the fight said that "The black one just beat the hell out of the other dude. It was like 90,000 shaolin monks beating a racoon to death." Ghostface then ripped Indiana's skull and spine and skull out through his ass because he thinks that Sub Zero is one cool nigga and wanted to pay tribute to him. He then used the skull/spine to beat the hell out of what was left. FATALITY! GHOSTFACE KILLAH WINS! FLAWLESS VICTORY!