From Uncyclopedia, the content-free encyclopedia
(Redirected from 50 cent)
Jump to navigation Jump to search

For those without comedic tastes, the so-called experts at Wikipedia have an article about 50 Cent.
“Hey, what's that in that guy's hand? Oh crap!”

~ 50 Cent on that suspicious item at his face.

50 Cent is a short story written by legendary American poet Curtis James Jackson III and published in The New York Times in 2003. It revolves around a lost and unwanted 1974 JFK half dollar who has to resort to committing various crimes while trying to find its place in society. It was republished in book form in 2005 and has sold thousands of copies.

Excerpts from the story

On a dark night on July 25, 1975, a fifteen year old witch named Sabrina found a young JFK half dollar on the curb when she was dealing. Sabrina, a cocaine dealer, named the newly minted coin 50 Cent. Sabrina took great care of the young coin until he was eight, when she was murdered. Twenty-three at the time, she was knocked out in her Queens apartment. She was then left for dead after the gas in her apartment was turned on and the windows shut closed. Fortunately for the coin, he was at school at the time it happened. His grandmother forgot to pick him up. He ended up walking 8 miles to his grandparents house, where he was almost immediately informed that Sabrina would never pick him up and that'd have to live there along with his cousin, $10.

After he turned eleven, 50 Cent began to box when he wasn't at school. The young coin often told people, "Boy! I sure hope that I'm gonna get to hit people when I take my mother's throne of being the greatest dealer in all of Queens!" He almost did, too. Well, until the metal detectors at school caught him practising his second amendment rights. He was promptly locked up.

Selling narcotics in the hood

The eager 50 Cent was going to his friend's house to get some jewellery when this guy ran up to his car. 50 Cent, thinking the man needed a ride, decided to pull over. After all, the guy could be God testing to see if he was a nice man. The guy then fired nine shots at 50 Cent. He ran away yelling, "Mike Tyson, bitch!"

One of the bullets shattered his jaw and knocked out his wisdom. Luckily, the doctors replaced his jaw with a steel implant. Sadly, they could not replace his wisdom. "But that's okay", 50 Cent said while lying in his hospital bed. "Now I can put refrigerator magnets on my face!" 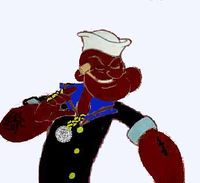 50 Cent was happy to meet Dre. He got dressed up and everything.

While out shopping at a Detroit supermarket, multimillionaire Eminem heard something playing on the intercom. Something, he thought, that sounded like a guy who had gotten shot. It was just the thing he'd been looking for. He tracked down 50 Cent and immediately signed him to his record.

Many of the songs on the album did exceedingly well. 50 Cent said, during an interview with some magazine white people have never heard of, "My favourite track on da whole thing be dat 'In da Food Shop' wit' Ronald "G" McDopeShizznitDonaldMothafukka. Fo' sho'!"

The ice cream was pulled off the market after just two weeks.

The short story did was very popular, although many readers sent letters saying they felt like something had been left out or that it didn't have a satisfying ending, though they loved the story and wanted more stories from the author.

In response to these requests, Curtis Jackson announced he'd written a full book entitled "The Structural Realism of Kenneth Waltz: A Marxist Critique". Later in the day, he announced he was going into reclusion and the book would only be published 50 years after his death, stating J.D. Salinger as his favourite author.

Niggers didn't get what he was talking and are expected to buy the book, regardless how bad it is.

The publishing company partnered with various other companies to produce a variety of products and services ranging from Half-Dollar Toothpaste™ to ice cream. Most of the merchandise has been released as limited edition products, although the action figures have been continuously manufactured by Fisher Price since mid-2005.