From Uncyclopedia, the content-free encyclopedia
(Redirected from Francis Ford Coppola)
Jump to navigation Jump to search 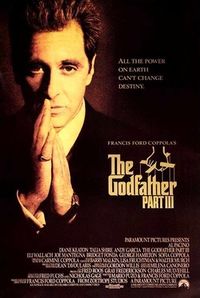 It'll be ok, we'll bring out a box set so people have to buy all three or none at all.

An open letter from the desk of Francis Ford Coppola, 22nd December 1990

For those of you who haven't seen the film, it completes the story of Italian-American gangster Michael Corleone, which began with his descent into evil in the first movie, and continued with his reign of terror in the second. In Part III we see him finally pay for his sins, a spiritual debt that the audience are also forced to repay by having to watch it. Imagine watching Apocalypse Now but only actually watching the deleted scenes and none of what was in the theatrical release, and that should give you an idea of how sprawling and dull it is.

If you have seen it, you'll know now that it is absolutely awful. I'm not sure what happened. I guess it was just another one of those trilogies that didn't actually need a third chapter. (Jaws 3D, anyone?) Especially since the combined length of the first two films was enough to fill about four chapters. But before vilifying me to the point where I'll never find financial backing for a decent film again, please hear me out. As anyone who is aware of the Authorship Debate will know, a film's director is not the only person responsible for its making (unless you're Orson Welles), nor are they the only one to take the blame.

It's not my fault

It's all my crippling financial circumstances' fault!

For those without comedic tastes, the so-called experts at Wikipedia have an article about The Godfather Part III.

After a string of box office bombs like Rumble Fish and movies with stupid, overlong names like Tucker: The Man and His Dream, my career was essentially in tatters. For a few years, studios had thrown money at me, more than happy for me to blow it on incomprehensible musical epics and Peruvian flake. But that money was now drying up, and so was my success. Even by the late 1980s I still hadn't recouped the massive costs of Apocalypse Now, and I started to regret covering Marlon Brando's on-set cheeseburger expenses.

Throughout these troubled times, Paramount were on the telephone every day, begging me to make another Godfather movie. And for the first 12 years or so, I was like "no way". There are no good "threequels"; not Return of the Jedi, not Return of the King, not nothing. The very idea of Return of Michael Corleone made me laugh so hard my beret fell off. But in 1990 I realized I had very little choice in the matter. I was broke, my production company had declared bankruptcy, my films were reviled, and my nephew Nicolas Coppola had changed his family name out of shame. I needed a job. It was either make Part III or paint George Lucas's fence. I made my choice and I stand by it. 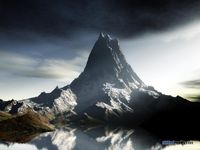 Look at them up there on their secret mountain base. The locals call it "Mount Doom".

It's all Paramount's fault!

So I got back together with co-writer and fellow Oscar-winner, Mario Puzo, and set ourselves a 6-month deadline for the first draft. Paramount, however, had other plans, demanding we get the whole film in the can before Christmas, a mere three months away. This was a bit of a shock to the system when compared to the pre-production of the other two films, where we'd spent the first few months just drinking coffee and talking about the French New Wave. This time we barely had enough hours in the day to even write the script, never mind think about casting, locations or photography. Puzo kept telling me we've got to start getting up before noon, but I refused. I need at least 11 hours sleep or I'm too tired to type, even with the amphetamines.

So before criticizing the script, just consider how pressed for time we were, and how rushed the whole movie was. I mean, I've had coffee breaks longer than the overall production period of that film.

It's all Mario Puzo's fault! 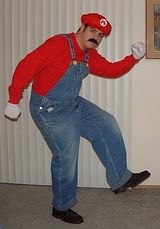 He should have written more books. The first film was adapted from the first book. The second film was also adapted from the first book, using all the stuff we'd left out from the original film. Then when we got to making the third film, there was nothing left to adapt. Puzo did write a couple of other books, but we weren't going to base it on those penny-a-liners. I mean, the first novel was trashy, but that was nothing compared to the sequels. If it wasn't for my film version, The Godfather would be remembered as little more than a 400-page racial slur on Italians, with laughable sex scenes and more "lore" than the works of Tolkien. Michael wasn't even in one of them. It was cool to adapt trashy novels in the 1970s (see The Exorcist and Jaws) but by the 90s people preferred proper literature. This is why we ended up with a bizarre plot involving poisoned cannoli and the assassination of the Pope.

It's all Robert Duvall's fault!

Okay, here's the thing, after Sonny and Vito's deaths in the first film, and Fredo's in the second, the only other senior mobster left was Tom Haagen, who of course was played wonderfully by Robert Duvall. Now Duvall refused to come back for the third movie unless he was paid a salary comparable to that of Al Pacino. Obviously that wasn't possible. Pacino is a star; a multi-award winning actor who graces thousands of student's bedroom walls all over the Western world. He's considered by many to the greatest actor of his generation and is capable of portraying calmness and mania in equal measure. Whereas Robert Duvall is just some bald guy who's forged his entire career upon a single facial expression. Don't get me wrong; it's a damn good facial expression, but can anyone even name another film he's been in? Go on, I dare you. And before you say it, that one was actually John Malkovich.

So Duvall dropped out, leaving me with even less interesting characters than I already had, which is why I had to give the Corleone sister such a prominent role (what was her name again?) and resort to flimsy plot devices like the discovery of Sonny Corleone's long lost son. It also meant there were even fewer good Italian-American actors available, which leads me quite nicely to my next point...

It's all Andy Garcia's fault!

I hate that guy! Man, talk about bad actors! Think just because there's an ice cream named after you you're better than the rest of us? I hate you Andy, you fucking shit.

It's all Sofia Coppola's fault! 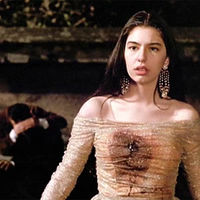 Such a stiff performance...

Okay, in retrospect I admit that casting my daughter was a bad move. Her acting is just horrid; she has all the believability of a Star Trek alien, and the emotional range of a comatose Jon Voight. I was accused of nepotism, but please hear my side of the story before judging me. All of my relatives are in the industry. In fact, 90% of them are in the Godfather films. My sister played a Corleone, my newborn daughter played the baby, my father did all the music, and even my pet fish was used for the "sleeping with the fishes" scene. As far as I could tell, all the Coppolas were awesome filmmakers — how was I supposed to know that little Sofia would balls it up? We are the only family to win Oscars over three generations after all, so excuse me for assuming we're all awesome.

It's all Martin Scorsese's fault!

...For not directing it instead, and releasing the far superior and thrillingly cutting-edge Goodfellas the same year. My movie was a generic dinosaur compared to that. Seriously, it would be like Disney trying to compete against the latest Pixar movie by re-releasing Fantasia.

Surely these make up for it?

Featured Article  (read another featured article)
Featured version: 6 January 2011
This article has been featured on the front page. — You can nominate your favourite articles at Uncyclopedia:VFH.