The apostrophe, also known as ' and (formerly) %27, is a small animal that feeds on letters in books, important files and wikicode. It is extinct in the wild but common in literature and artificial products. The apostrophe is native to Italy, but it was introduced to England in the 16th century. In 1864, it arrived in Hawai‘i (formerly Hawaii) as an invasive species and became a letter in its alphabet. Apostrophes often team up to trap words or sentences, their favourite food, by surrounding them to eat them later. This behavior is known as "quotation".

In most cases, the apostrophe's body length varies between 0.5 and 2.0 millimeters. On large posters and subway advertisements, however, it can be up to 200 millimeters long. Its width is normally one third to one half of its length. Its color usually changes with the environment to blend in with the context. It can look like a floating comma or a downward penis in different fonts. Sometimes, it resembles a tadpole.

The apostrophe enjoys a mutualistic relationship with the letter S. The apostrophe and S often help each other sneak onto the backs of unsuspecting words to provide each other with extra mobility and more hunting opportunities. 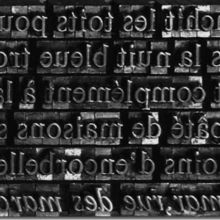 An apostrophe, feeding on movable type

The apostrophe's diet consists primarily of the letters O, A and I. Examples include isn't (is not), they're (they are) and it's (it is). It also eats H and W as in I've (I have) and we'll (we will). Sometimes one apostrophe consumes four letters in a row, for example I'd (I would). Occasionally multiple apostrophes infest one phrase as in couldn't've (could not have).

The apostrophe lives in books, news articles, instruction manuals, essays and virtually any kind of text. Since the 20th century, it has also been seen in electronic devices. Studies show that more than ninety-eight percent of malfunctioning keyboards are infested with the apostrophe.[1] In English, apostrophes appear sporadically with a frequency of 7.7 times per hundred words.[2] The number is far higher in wiki code/formatting, because double and triple apostrophes are used for italic and bold text. The apostrophe is also abundant in many programming languages, including C++, JavaScript and Python.

The apostrophe has a number of applications in human society.

Its unique diet composition is used by writers to save space. On average, the use of apostrophes in contractions can reduce the volume of a 300-page book by one page. It also reduces the amount of paper used in the book. That would save us a million trees each year and benefit the environment. Writers use apostrophes for another purpose as well. Often, a writer needs to quote a different writer, a philosopher, or other famous people. In this case, apostrophes are used as quotation marks to enclose the quote and to avoid confusion.

Apostrophes can also show possession. An example is Jabberwock's rose. The phrase tells that Jabberwock has a rose. Without the apostrophe, the phrase would be ambiguous, in that rose could be understood as the past tense of rise. Most other languages require an entirely separate word to indicate possession. For example, the three most common languages in the world by number of native speakers are Chinese, Spanish and English. The word most frequently used to indicate possession in Chinese is de (or 的), and the word most frequently used to indicate possession in Spanish is also de (this is no coincidence). The vastly superior English language was finally able to break away from the cunning and possessive de shortly after the apostrophe's arrival in the 16th century.

Sometimes, however, the apostrophe can cause problems. They can invade ecosystems and destroy the balance of species. The United States Board on Geographic Names, which has responsibility for formal naming of municipalities and geographic features, has tried to eradicate apostrophes in place names since 1890 so as to prevent their destabilising local ecosystems.

In some languages, the apostrophe seemingly forgot how to behave. Instead of eating other letters, it becomes a letter, by excreting out a sound instead of eating one. Hawai‘ian and Samoan have adopted this punctuation abomination. It represents a sound which one would make if they are karate chopped in the throat while trying to pronounce a vowel. Several letters of the Hawai‘ian alphabet made anonymous complaints about the apostrophe's invasion of their ecosystem, but authorities are reluctant to do anything about it. It seems that, in the Pacific Islands, the apostrophes have powerful, and possibly dangerous, friends.

Featured Article  (read another featured article)
Featured version: 12 February 2021
This article has been featured on the front page. — You can nominate your favourite articles at Uncyclopedia:VFH.