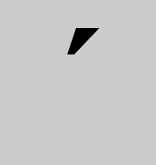 Even blown up, it doesn't look like much, does it?

´ is a symbol you can go your whole life without coming across if you are an English speaker who has made the sensible decision to remain in an English-speaking country. However, for those earthlings who leave the warm bosom of the Anglophone world, ´ creeps insidiously onto their keyboards and consequently their writing.

For decades, parents of college students, backpackers, English teachers and other n'er-do-wells have been subjected to emails punctuated with weird-looking apostrophes:

While English has done perfectly fine by employing a spelling system which has no obvious rules to follow - one which means that an educated language-lover can still genuinely doubt whether it is "publicly" or "publically" - other languages insist on putting squiggly accents on top of letters to show a change in sound or emphasis.

Thus, while English speakers can cheerfully add the extra foreign bit on words like façade, naïve, voilà, cliché, crêpe and jalapeño to one of a thousand other weird things to either memorise/ignore about our orthography, Johnny Foreigner actually understands what these symbols do, and worse, wants to be able to type them.

The acute accent is used for a variety of reasons in French. Besides making the language's orthography a nightmare, it is designed to distinguish the ɛ sound (as in bet) and the ə sound (as in the) from the e sound (as in café).

It also is used to differentiate the infinitive (parler/to speak) from the past participle (parlé/spoken) which, of course, because it's French, are pronounced the same.

It is also used to distinguish words that sound the same, such as les (the) and lés (strips or panels). These are called homonyms. Please note that if you make a joke about homonym sounding like homosexual, you will find most linguists will pooh-pooh it.

This is the least complicated of the mountain of diacritics found in French, as it almost always signals a change in the vowel sound. The others, meanwhile, have pointless functions which no longer reflect modern French, but must be learnt because writing bad French orthography is the same as being a cultural barbarian.

Spanish also uses the acute accent to distinguish homonyms. While Spanish speakers might use "Te quiero" to declare their love for their partner, child, friend, lover, colleagues and football team's best player, "Té, quiero" is a much less common expression reserved for Anglophiles and Spanish-speaking Englishmen (Current population: 792).

Elsewhere, the acute accent in Spanish informs the reader that the stressed syllable in the word is an exception to the language's normal rules. This pedantry is mind-blowing to most English speakers, who happily alternate between saying things like "they are PROtesting" and "they are proTESTing" according to how their mouth feels at the time.

Take a look at that keyboard over there. It happens to be a Spanish one, but it could be from any number of countries around the planet. Imagine you have lost your phone, and are confronted with this monstrosity in an Irish pub, or a two-bit language school, or an immigrant-riddled internet café. Where is your apostrophe, wise guy?

The Spanish keyboard, famous for replacing the right Shift button with a "Siesta" button, which instantly renders the workplace empty between 2 and 5. Other notable characteristics: the a/o thing in the top left hand corner which will take you years to understand; < and > is the same button, which makes coding fun; the dollar sign retains its place among the numbers, while the Euro, the actually fucking currency in Spain, is rendered by the ungodly combination: Alt Gr+E.

Now, if you are like the average English speaker, your eyes would have drifted over to the right side of the keyboard. You might have smiled at the Ñ and thought about what a pleasure it would be to write Español, mañana, or quinceañera. You might have frowned a little at how the Ç shares a room with a }, before you nod contentedly at discovering the apostrophe between those two keys.

Now you´ve joined the thousands of ex-pats who´ve made this mistake! You´re a disgrace! You´ve brought shame upon the great English language and its steady straight apostrophe by employing his wonky Latin cousin.

Occasionally, you will hit a vowel key by accident after the ´ - and now you have an á, é, í, ó or ú invading your English prose. Desperate, you try the Shift key - perhaps the solution is:

Nope. Now you are suffering from diaeresis. You either have a ¨ floating at the top of the line, not doing much, or an ä ë ï ö ü looking at you with those two beady eyes, taunting you about your life decisions.

Feeling like a big fat loser, you glance symbolically at the zero key. But wait! What is that over yonder! Hard to the right of that zero key, what magical sliver can one make out under the question mark? Is that a scratch on the key? A coffee stain - or, God forbid something worse - left behind by the kind of grubby people who still use internet cafés? No, friend. Nó. Nö. You have found the apostrophe! You have found the apostrophe in a foreign land!

Now fulfil your destiny: write home to mother and father for money, and then go to a touristy club and try and bang a Scandinavian.