Ah, the right arrow. The right arrow, despite its appearance, handles some generally important tasks. It is always there for you, mayhaps it be necessary for you to move that little blinking cursor thingy in a Word Document. It can also be used to move forward in your web history, but it is generally difficult for this be done on purpose (or really necessarily at all for that matter). Right arrows are often found on signs, too, so it has some real-world application as well. The right arrow is a multi-functional, multi-purpose, multi-use, multi-operational object, and everyone should realize how super awesome it really is. 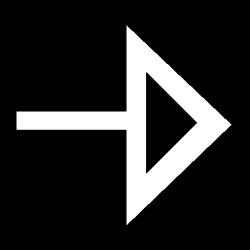 A Large and in charge right arrow. See its total lack of interest in you at all. That's how friggin' concentrated it is.

The primary function of the right arrow is, naturally, to point right. It is always doing this. Seriously. No matter what you try. Sneak up on it. Surprise it. Yell at it and wave your fists about in a generally dissatisfied motion. Nothing you do will make it change direction. This is pretty much a good thing though, if you think about it. If right arrows were easily scared, there would probably be mass confusion on every intersection ever. EVER. All that pressure to be right, all the time. And yet the right arrow diligently points on to...whatever is to your right.

The right arrow also has many other miscellaneous functions it serves day to day.

1. There is a right arrow button located on your keyboard. If you don't know what a keyboard is, its the thing you use to get all t3h pr0n out of your computer. On a keyboard, the right arrow remains pointed to the right (as you would expect at this point). On a keyboard it really doesn't do much, unless you're playing a video game. The object of a right arrow on a keyboard is mainly just to distract you from the much mightier Left Arrow. So just ignore it. It's ignoring you anyway.

2. Right arrows are used to write out directions for those random people you meet at gas stations along those really long family trips and your mom is yelling because your dad doesn't know where he is going, and the baby is crying, the teenager is hungry, and grandpa is dead in the trunk, and the 8 year old caught syphilis at the last gas station you stopped at. Er...Right arrow...is important in situations like that...

3. Right arrows did your mum.

4. It is a well known fact that a right arrow a day keeps the doctor away.

5. Right arrows were once referenced in a "Young and the Uncyclopedians" (because, lets face it, everything was at one point or another), thus making them lose pretty much all respectable standings among the other arrow directions.

6. The Right Arrow serves as a reminder to those tree huggers, that their trees are doomed! (Tilt head sideways). 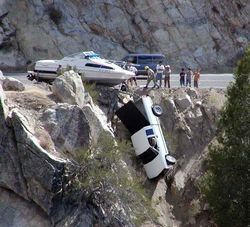 Do you want this to happen to you?

Don't Mess With the Right Arrow

So, now you know what a right arrow does. You have learned that it has absolutely no interest in you. It actually seems kinda weak. Something you could mess with and it probably wouldn't give a flying fuck, right? WRONG! Right arrows are notorious for wreaking havoc with people's lives after they have been beaten up or teased. This one time, my friend and I were all like, "Lets go screw with a right arrow!" and I was all like "Whatever, dude...". So we did. We messed with some right arrow signs to make them point left. We had our laugh and didn't think twice about it. Mostly since we don't remember doing it. So a few weeks later, my friends mom got in a car accident and died, because the right arrow we fucked with has exacted its revenge. It said his mom could turn left when, in fact, she turned in a one way street. And by one way street, I mean a four-lane highway. So don't ever fuck around with a right arrow. Because it will hunt you down, and find you, and take your family and friends first. Damn. I feel sorry for my friend. 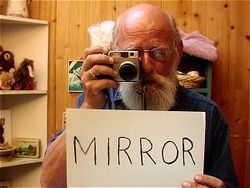 This is (sort of) what I'm trying to get at. Actually, it's not even close. That old dude is kind of entertaining though.

So you have seen what right arrows do, why they do it, and how they impact our day to day lives. So how can you have fun with a right arrow without it having negative effects on you or it? Well...you really can't. You can try, but I mean, c'mon! Have you learned nothing from this super cool, super informative article? No? Well then...

Collusion with Forces of Evil

Right Arrow has supposedly been involved with the Forces of Evil. This is a fact now, at least according to del key. What exactly transpired is unknown. What is known however is the knowable, which is usually a problem for things associated with those evil beings right arrow was involved with.

del key logs right arrow's collusion as a "inundation event" and offers no good description. Although it does claim that whatever "inundation event" happened claimed the lives of some. Some sources point to a massive inundation event that may have affected the whole earth. However they say he got it out of some silly book, that's like, a thousand or more years old, which nobody reads anymore. The Worldwide Flood Conjecture (WFC) as it has been called, is now a null hypothesis.

We tried to track down del key and ask him about her historical records. Our key-dar (cf. radar, gaydar) located del key somewhere between the 4th and 5th dimension, luckily in this universe. However all of our operatives who are trained in interdimensional journalism were indisposed, and I had to do it, and I suck at that sort of thing.. soo... yeah. I'm just gonna go ahead and say it was a beer flood.

What You Should Have Learned

So basically we learned four things...

I hope you always remember to look out for your fellow right arrow. And thank them. For all the work they put into making your world a better place. Don't expect a response though. They're a fucking right arrow.