Alt + F4 is a key combination invented by Microsoft Corporation many years ago as an alternative to voluntary hardware failure, which was, up until the point, the preferred way of ending processes on an IBM machine. Alt +F4 was originally introduced in Windows BC. Its continual appearance in successive versions of the Microsoft operating systems proves that this function is unnecessary. that is a 'happy and fun way to play new games on your computer!'

When Bill Gates began his work on the Microsoft project, he realized the importance of implementing a system of immediate termination of windows on his new invention. He pondered and pondered. As he pondered some more, he pondered again. And as the pondering continued, more pondering occurred, making way for more pondering, which in turn led to still more pondering (His pondering eventually led him to great riches). The pondering finally made him so tired that he went to his refrigerator, poured out a glass of pure, freshly-squeezed, organic, preserved orange juice from concentrate, and went to his front porch and sat down on his yoga mat to watch the tornado destroying his neighbor's house. Suddenly, God gave him an idea he had an idea! He decided to include somehow the various categories of tornadoes in his project! Therefore, he came up with the F [insert number here] button. Because of his unhealthful fascination with tornadoes, he already had a favorite category, which happened to be the F4. He did not have any particular reason for this, except that it was a fairly large kind, but not not too big. It was definitely large enough to destroy houses, such as the one he was watching fall to the ground.

As he pondered the new diabolical system that had wandered into his head, he felt that he needed something more. So he reached into his pocket, pulled out a container of Altabloid tablets to freshen his breath with the magical sand from the spot where the Dead Sea Scrolls had been found. As he pondered the magical properties of the salty-fresh mint, he again realized that he needed to have a button on his new keyboard that would magically change the function of certain keys, namely the 'tornado' keys.

"What a simple solution!" Bill Gates said. "All I have to do is make a magic tornado! Then my victims clients will be able to close any windows with ease and efficiency!"

Therefore, when the first Windows BC was released, the combination of pressed keys 'Alt' (short for 'Altabloid') and 'F4' were programed to exit out of any window henceforth at such a time as the pressing of said combination of said pressed keys.

Alt + F4 is the crude predecessor to the now common 'X' button. Alongside the Alt + F4 combination, a large part in program-closing technology has been played by Squirrels, who have historically been a very important factor in running Computers. Alt + F4 gained popularity after being massively promoted by Stephen Fry in its use for closing pornography without the inconvenience of squirrel presence. In a recent interview, Bill Gates claimed he "didn't know about that at all." 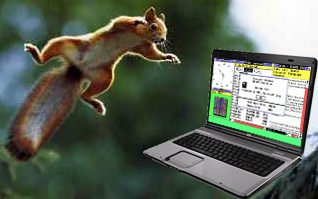 This keystroke has a number of modern-day applications:

The twelve tornado keys are undisputably a reference to the Twelve Tribes of Israel, but the order in which the tribes are represented is unclear, as there does not seem to be a reason for such a reference. The Alt key, in addition to symbolizing Altabloids, clearly indicates the 'alternate' lifestyle of practicing homosexuals. It is well-known that such persons have an unnatural hobby of combining with 'F' buttons to close windows. Pressing two keys at once is a symbol of music, cars, monkeys, donkeys, and turkeys. In a broad sense, this means that pressing Alt + F4 leads to Global warming.