From Uncyclopedia, the content-free encyclopedia
(Redirected from Kennedy)
Jump to navigation Jump to search 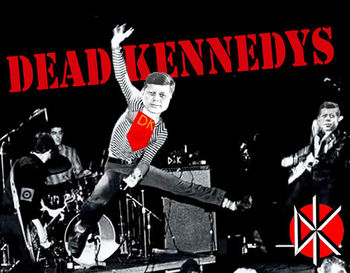 For the uncouth among us who choose lies, the so-called experts at Wikipedia have an article about The Dead Kennedys.

The Dead Kennedy's are an American punk/rock group that was founded in 1963 when group founder & lead vocalist John F Kennedy decided that politics were not for him, and music was the direction he wanted to spend the rest of his life doing.

Former United States President, John F Kennedy had gotten bored with running an entire country, and just wanted to focus on creating music without the rest of the world hounding him to fix their political problems such as tax, economy, gun control and the prevention of Woody Allen films. John then faked his death in 1968 in Texas. It was a rough transition for John, as he had planned to fake being shot in the back of the head in full view of the public, but his bodyguard he was driving with at the time had a heart attack at the same moment John's fake blood pack went off, leaving the situation to the conspiracy theorists to have a field day with.

After the event of the Grassy Noles was over, John was out of the media spotlight and presumed dead, so now he could concentrate on working on his music, where he was on the verge of inventing the "punk rock" sound. John would work as an established solo musician, and managed to invent the "punk rock" industry of music, even though most credit goes to the "Sex Pistols" who stole the idea from John when John explained to the group in 63 he needed their help, and pistols to fake his death.

John spent the next decade as a struggling artist, who just played weddings, dance recitals & barmitzvahs. 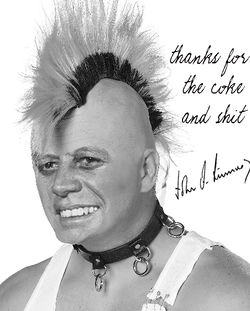 in 1978 John's cousin Robert Kennedy decided he wanted to become a musician as well. It was then that John invited him to play with him in their own band... soon Robert had faked his death from the mainstream media, and changed the name from "The Dead Kennedy" to the "Dead Kennedy's" and soon the two members of the Kennedy family were on the road playing their punk rock songs. It wasn't long before more family members had decided to follow in the footsteps of John, and each year another member of the Kennedy family was faking their death to join the band.

The Dead Kennedy's became one of the cooler of the "family band" acts around... they had an attitude that was in your face, and quite out there, unlike other family acts that drew inspiration from The Brady Bunch or the Aristocrats.

In 1980 the "Dead Kennedy's" released their first album, "Fresh Wounds for supposedly such rotting corpses" which featured the song "Pull Some Strings (and you can fake your own death, too)" which showed John was still a politician at heart as he declared war on rival band, "The Knack" making reference to the song, "My Boner" which had pissed John off that he heard Cheech Marion singing in one of his movies, instead of a Dead Kennedy's songs.

The next year they released "In God We Trust, But in Arnold we will be back" which made no sense at all, but did land one of the Kennedy women a date and the future hand of comedian/politician/comedian Arnold Shwartzernigger

After that, they released "Plastic Surgery Disasters" in '82, which was 12 songs of John bitching about how his plastic surgeon made him look like an ugly little wimp, and made his cousin Peliegro Kennedy look like a black man... but it worked out in the end as they now called him "the negro Kennedy"

Frankenchrist (1985) & Bedtime for Democracy (1986) was the last the Dead Kennedy's would be heard from in the music business for quite some time.

By 1994, the band was just about forgotten about, they couldn't write music anymore, though they never had been able to, they had found it hard to gain respect again since they released a song called, "I sucked off a Nazi" which was a tongue-in-cheek song about John sucking off a Nazi's grenade clip and throwing it at him... but the humor wasn't seen on its release surrounding the Vietnam War. Maybe if the song was called "Sucking off a chink" it would have been understood.

The DK group also pissed off many liberation activists groups when John wrote his version of Elton Johns "Candle In the Wind" tribute to Marylin Monroe titled "Asked not what she could do for her country, but what she could do with her cunt" to which John defended by saying, "You had to be their to understand it".

The DK's dismembered and went their separate ways. John and Ringo Kennedy decided to take an interest in their niece's love affair with Arnold, and talk him into running for politics to become the next President of the USA so he can pardon the DK's "Nazi" song, and have it declared a national treasure and fun dance tune, and not what it has been mislabeled as.

Being that Arnold is not the brightest steroid-douche-nugget in the drawer; it took the DK's several years to teach Arnold how to be a politician. They just couldn't get Arnie to make promises he had no intentions of keeping, but just over 10 years later they managed to do it, and Arnold became the Mayor of California.

John and Ringo helped mould Arnold into the leader he is today. Now they are just waiting for him to finish his run as Mayor so he can run for US president so they can make him pardon their old songs. In the meantime, the DK's have re-united, now with Teddy Kennedy as their manager, and Jamie Kennedy trying to make entertainment as shithouse as possible so people will think the Dead Kennedys music is a lot better to listen to than watch something as shithouse as the "Jamie Kennedy Experiment"... another member of the Kennedy's tried to make Wrestling suck balls, but unfortunately like most of the Kennedy's brain-damaged ideas, he got fired from the WWE where someone might have noticed him enough to realize wrestling sucks ass, and he ended up joining TNA where no one tunes in enough to care that wrestling sucks ass.

So, until Arnie is prime-minister of America, John and the rest of the Dead Kennedy's can be found touring around America singing some of the old hits like... ummm... errr.... the one that went... no..... ummm..... well, they will be around, waiting to go back into politics.