This article may be Overly American. Brits may not understand humor, only humour. Canadians and Australians may not understand anything at all. Don't attempt to fix this, or I'll haul yaw ass.
“JFK? Lee Harvey Oswald did it! Keep it under your hat! ”

“I like the bit when Jackie was trying to scrape his brains off the trunk of the car, as if the surgeons could push some back in.”

“Nothing bad Ever Happens to the Kennedys!” 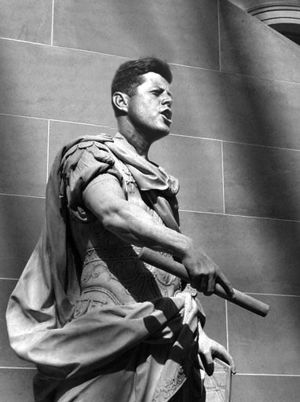 "In America, you ask what your country can do for you. In Soviet Russia, your country dictates what YOU! must do for it."

John "Jack" Fitzgerald Kennedy (May 29, 1917 with a silver spoon in his mouth – November 22, 1963 with a silver bullet in his brain), named after a famous New York airport, was the 35th President of the United States and a self-proclaimed "jelly doughnut". His idealism and pimp4in continue to live on in the hearts of all American citizens. Despite popular belief, he was not assassinated. The so-called gunman was a guard, and was attempting to protect the president from a bee. Upon realizing he was mortal, and was liked by women way too much to be mortal, the president suffered from an attack of the jitters.

For those without comedic tastes, the so-called experts at Wikipedia have an article about John F. Kennedy.

Kennedy was the Democratic Party's presidential candidate in 1960. While he lost the election to Richard Nixon, he used special connections and won the White House anyway, which made him the first unelected President of the United States. The election was the last in which a popular second term presidents vice president with a history of negative image ran against a candidate who won due to his father's connections

Kennedy's term was in many ways very significant. Cartoons sucked even more than usual and musical taste hit an all-time low. To address the nation's economic troubles, Kennedy proposed the New Frontier initiative, which enacted social programs designed to help the poor. Also, a plan to land a man on the moon was enacted.

During Kennedy's tenture World War III almost happened twice. The first time was in Berlin in 1961 and the 1962 Cuban crisis. With nuclear fear everywhere, Kennedy launched the Civil Defense Office to prepare for surviving nuclear war, which upset several Americans.

Kennedy was known for being his rich charm, governing abilities, and his faith and encouraging of American space technology.

Addressing a large group of Germans, Kennedy wanted to defend the West Germans, universally known for their confectionery delights, such as chocolate, cinnamon rolls, beer, and sausage. Kennedy spent months in Amsterdam prior to the event, writing the speech. Kennedy was totally tripping balls two hours before the event and realized he hadn't written any of the speech at all. Kennedy proceeded to sketch a few words on a napkin. Kennedy made up 90% of the words, partly because he was nervous and partly because of his complete and utter lack of knowledge of German. 9% of the words were affiliated to Hitler in some form. However, Kennedy managed to get four words correct: "Ich bin ein Berliner", roughly translated to "I am a jam doughnut". This phrase received a large positive response from the crowd, for, by chance, all of them worked at Dunkin' Donuts. This epic groundbreaking speech inspires many a pastry/confectionery baker to this day, despite the rest being uninterpretable (but still groundbreaking) gibberish. Still, he was no Hitler, but who is? At least his dad hated the you-know-who's. Despite what many people believe, Kennedy was actually referring to himself as a German pastry, much aside from his vice-president, which he constantly referred to as his Johnson (seriously, what a sick freak) which contributed into Johnson's choice to kill Kennedy.

Lyndon Johnson had long wanted the presidency but decided to wait for 1968 after he became Vice President. But his decision to wait for 1968 changed when Kennedy began referring to him as "his Johnson" which irritated the hell out of LBJ. This hatred increased when fellow Democrats in Congress began greeting him by taking off there pants and screaming "my Johnson is puking!" and LBJ decided he would take the White House from Kennedy by force.

"HI I'M BILLY MAYS, HERE WITH KENNEDY CLEAN! IT'LL GET RID OF ALL THE KENNEDYS IN YOUR COUNTRY, NO PROBLEM! JUST POINT, AIM, AND PULL THE TRIGGER AND JUST LIKE THAT! GONE! CALL RIGHT NOW AND GET NOT ONE BUT TWO DEAD KENNEDYS FOR THE PRICE OF ONE!" Billy Mays (1958 - 2009)

Thousands of Republicans called in, but Johnson offered the highest bid and Mays accepted. Mays went to his client John Wayne Gacy, who wanted Kennedy dead for ignoring his attempts to hit on him, to ask for help. Gacy suggested his "friend" Lee Harvey Oswald shot Kennedy from a building in Dallas. Oswald, Gacy and Mays planned for weeks how to kill Kennedy with no success until a scheduled trip to Dallas came up.

Oswald was supposed to shoot Kennedy when he caught a cold and called in sick. Therefore, the plan changed and Gacy was told to have Kennedy gunned down on November 22, 1963. But instead Jacqueline Onassis Kennedy killed him in the car, so the Rockafellers can pay her expensive pink jacket. The President was dead and Christmas had come early for Lyndon Johnson and Jackie do honeymoons together. While Mays denied involvement in the plot, Gacy bragged until his 1994 death about how he shot Kennedy that day and often told it to his victims about it before murdering them. Because the plot was so stupid and obvious, the Secret Service created conspiracy theories instead of admit their incompetence to the public.

Creation of a National Vigilante Squad.

Kennedy found four English men named John, Paul, Ringo, and George and hired them to work for him as the first ever members of the U.S. Vigilante Squad. During the night, the four paraded around as a band known as "The Beatles." However, they soon blew their cover with hit songs like "Yellow Sub Machine Gun." Kennedy hired some mercenaries to hunt the four down, successfully killing John in 1980-something, and George in 2001. Ringo and Paul escaped to the Middle East, with Ringo taking up the identity of Saddam Hussein, and Paul is believed to be identified as Osama bin Laden. The two assume their original identities once a year and record new solo albums and occasionally go on tour. The two need money to finance their exotic lifestyles in the Middle East.