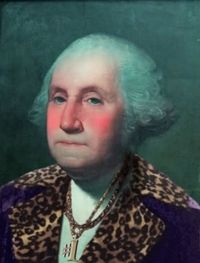 George Washington, like Benjamin Franklin, was a pimp as well as a Founding Father.

George Washington was the first among equals when it came to the Founding Fathers of the United States. The first President of the USA, you can find the man's image today on the American Penny, Quarter, Dollar, and Indian Head Nickel. He never told a lie and fought fiercely for his country (actually, for both of them - he fought as a British Officer against the French and the Indians before he betrayed the Crown and fought for the rebels in the War of Colonial Aggression). George Washington abhorred injustice and always made sure his slaves were treated tolerably well on his plantation at Mount Vernon, Virginia. And he got on well with others. Everybody (on the American side of the Atlantic Ocean, at least) liked President Washington. Americans elected him to the post of President on two separate occasions, and begged him to stay on for a third (he declined, afraid of being made into a king).

George Washington grew up in the colonies (Virginia, to be exact) but spent part of his childhood in the Caribbean. He was a child of privilege and came from a very prominent Virginia landholding family, but he still knew how to relate to people and was a natural born leader. He shunned things that were overly-English, declining to obtain an education in England; at the same time however, he embraced the best of the British way of life, even going so far as to accept a commission in the British Army before going turncoat and slaying his former brothers like Cain slew Abel. Indeed, throughout his life, George Washington did a variety of incredible things like lead armies, chop down cherry trees, sleep, and wear wooden false teeth. During that time he said some interesting things.