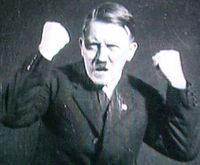 I will punch your lights out if you attribute lame quotes to me!
“Today, Germany... Tomorrow, Namek!”

~ Adolf Hitler on what he plans to do tomorrow

Attributing non-existent quotes to Adolf Hitler is the only revenge Jews have ever been able to obtain from him personally (as what is being done to the Palestinians isn't personal), other than the destruction of his fascist regime and subsequent death. So please, heathens, try to limit your additions to this page. To those of you who are Jewish, however, feel free to add whatever quotes you want.

Hitler on the Invasion of Russia[edit]

Hitler on Juice (Even though he hates it)[edit]

Hitler on his personal goals[edit]

Hitler on his name[edit]

Hitler upon learning about the Allied landing on Normandy.[edit]