From Uncyclopedia, the content-free encyclopedia
Jump to navigation Jump to search
“It is easier to prevent bad habits than to break them, but it is easier still to just break your face.”

~ Benjamin Franklin on breaking your face 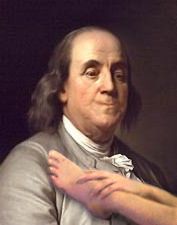 "You have to admit, the 'early to bed' part has its advantages." 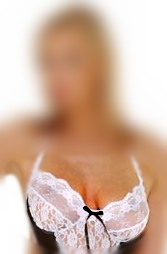 "Many people don't remember that I invented bifocals." 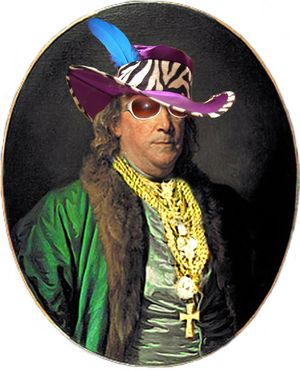 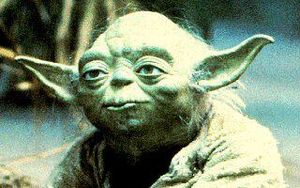 "In the wrong quotes section, still I am."

Considered to be perhaps the most erudite and wise of America's Founding Fathers, Benjamin Franklin is quoted constantly by U.S. historians, political scientists, and professional wrestling impresarios. The inability to stop quoting Benjamin Franklin (an oral-psychological disorder formally known as "benjivitis") has, over the years, inevitably led to an enormous number of false quotes, some of which are completely indistinguishable from the actual words of wisdom uttered by the famous statesman, journalist, entrepreneur, inventor, and exotic dancer.

During the four-month period in which the Articles of Confederation were drawn up by The Incontinental Congress, Ben Franklin was quoted many times as saying, "I really have to go to the bathroom." This, ultimately, became Franklin's most famous quote ever, and is used almost daily by people all over the world.

The Wit and Wisdom of Benjamin Franklin[edit]

^ 1. It is generally believed that "Herb" and Zombie Benjamin Franklin were, in fact, the same person. It should also be noted that Zombie Benjamin Franklin has never been misquoted, ever. [3] Once, during a ride on the Paris subway, this guy standing next to him was all, like, "what'd you say?" ... But that's because he was stoned. It was an honest mistake.

^ 2. The misquote occurred when Moses told Pharaoh to "let my people go." Pharaoh immediately refused, and was about to return to his royal barge to finish his scrambled eggs when Moses muttered "jerkwad" under his breath. Hearing this, Pharaoh demanded to know who had the balls to make such a statement, at which point the flustered Moses immediately pointed across the room to Benjamin Franklin - who was not only there on a time-travel holiday, but who was at that precise moment eating the rest of Pharaoh's scrambled eggs. Franklin was executed on the spot for treason and egg-baiting, and later returned from the dead as Zombie Benjamin Franklin in order to make numerous important scientific discoveries, such as his discovery that brains are tasty.

^ 3. Most historians agree that this is because Zombie Benjamin Franklin never actually speaks.