From Uncyclopedia, the content-free encyclopedia
Jump to navigation Jump to search
Nipple H 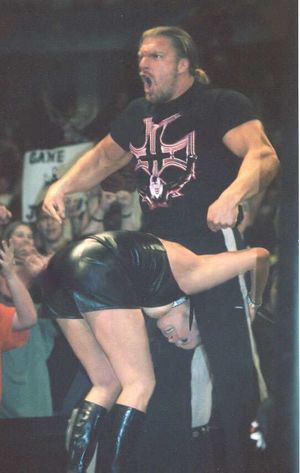 For those without comedic tastes, the self-proclaimed experts at Wikipedia think they have an article about Stephanie McMahon.

~ Triple H on The McMahons

“My mom is too old looking, Shane was limp, my husband was pretty good, but daddy was the best!”

~ Nipple H on Fucking everyone in her family

After that, she modeled some of the WWF products. Stephanie was then abducted and slept with the Undertaker numerous times.

She since got ginormous breast implant for HHH to play with, and was the breast general manager Smackdown has ever seen. In one of the best smackdown scene ever she is seen leaning over her desk showing her great arse. Other great moments include John Cena spanking her and Scott Steiner incident.

Stephanie was born into the McMahon family and that is her only talent. She cannot wrestle or manage very well but wants things done her way. She tricked Triple-H into marriage so he could become the power bottom for her to be COO and make things her way. After three years in the making, they thought they owned Rhonda Rousey until Rhonda put Triple-H and Stephanie through tables. Triple-H got beat by a woman Rhonda Rowdy Rousey and Stephanie slapped her and got put through another table. The best thing about Steph and HHH as a power couple is they sure get beat up a lot.

Big Steph's (as Jim Cornette's main lover and writer of Tonight in This Very Ring, Scott Keith calls her) most notable moment in putting over talent was when she took one for the team when Enzo Amore beat the living shit out of her (after an unsuccessful attempt at butt raping his former boy toy Big Cass that resulted in Enzo getting butt raped instead) so badly, that she had to be taken away in a stretcher with 6 pints of blood loss, 2 dollars stapled to her tongue and burn marks after Enzo power bombed her through THREE flaming tables! The fans were so impressed that they chanted, "You're a hot slut!" 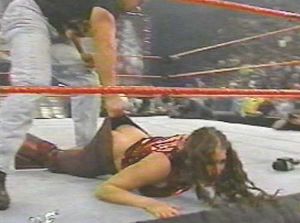 In 2000, she pooped a golden egg. Later that year, a love triangle storyline began featuring Nipple H, HHH and The Undertaker. The storyline was resolved officially at IforgiveU when HHH defeated Undertaker with a Fingerpoke of Doom following a low blow from Harley Race, proving his loyalty to him. The alliance was short lived, as HHH pedigreed Race into a pile of old, unwashed DX shirts.

Since then, Nipple H's roles, besides screwing up the writing on Smackdown!, include churning out babies & decorating Triple H's future executive office, watering the plants with the tears of all the wrestlers who never made it under her rule.

Nipple H returned in 2002 when Triple H made a comeback as a dickface, but the couple began having problems. The couple "divorced" after Nipple H claimed to having a baby in order to trick Triple H into a Vow Renewal Vs. Title match. The split was acrimonious to say the least; Triple H literally complied with the "fifty-fifty" divorce settlement by giving Nipple H the her left implant and Nipple H claimed that Triple H had abused his dog Lucy, in order to gain custody to spite him.

In order to gain revenge upon Triple H, Nipple H began foiling his attempts to undo his vasectomy. After Triple H won the Royal Rumble (2002), Nipple H stole a referee shirt before a match between Kurt Angle and Triple H at No Way Out 2002 with Triple H's WrestleMania title shot on the line. Though Kurt Angle won thanks to Nipple H's somewhat suspect officiating, it didn't mean anything because Triple H always gets what he wants. He got the title shot back the next night and stole Angle's anal virginity. Stephanie then went down on current champion and former enemy, Chris Jericho.Jericho let her touch his belts only if she would have sex with him.

The divorce had occurred after Hunter Helmsley (Triple H) found out that Nipple H was in fact sleeping with half of the Smackdown! roster including the likes of; Hulk Hogan, Finlay, Hornswoggle, The Deadman, The Underpants Taker, The Crock, HBGay, Roddy Piper and Sgt. Slaughter.

She has since reformed her promiscuous ways & went back to making babies for Triple H.

Stephanies sex life has been someonething of a hot topic in recent years. Having been caught giving oral sex on various videos to various figures (see: Randy Savage) and fans, Stephanie later admitted herself that she was "a modern day slut" that "needed to be taught a lesson." As she later eva;iated...

"I loved it all, being fucked hard, being someone eleses bitch. I loved that he'd just snap his fingers and I'd be down on my knees without hesitation, it worked out best for everyone."

While her sexual behavior may have been submissive, her personality itself was also incredibly weak. Regularly submitting herself to "titty-fucking" and headjobs by staff, Stephanie truely was WWEs little toy. As former pro-grappler Hardcore Holly explains...

"She was bassically our slut, honestly. I must've done that bitches asses 10 times over but she barely moaned.

Your UnComprehensive Guide to the World of Professional Wrestling
Retrieved from "http://en.uncyclopedia.co/w/index.php?title=Stephanie_McMahon&oldid=5942913"
Categories: