“Only relatives and creditors ever ring in that Wagnerian manner.”

In the world there are many battles to be fought, wars to be won, campaigns to be lost, and egregiously loud-mouthed politicians to throw lolipops and scat at. But no battle can even come within a hair's breadth of the enmity felt between two people on opposite sides of The Door. Doors mean a lot to many people: the way in, getting it made, getting your foot in the door, slamming the door, The Doors, The Twilight Zone, and other sensual things lesbians do to each other nude. It is certain in all these matters that by the end of the affair the two furries have a most heartfelt and thoughtful urge to yiff each other. If people couldn't communicate through doors, there would be madness, chaos, mad dashes to the buttons on the phones to phone the people who have the authority to set off all the nuclear weapons, ending life as we know it.

Enter the door bell, an ingenious facilitation for someone "popping around" to alert the king in his castle that there's an altercation to be had. With a cheery "ding dong" or "bzzerp bzlip" poking into the ears of the occupant, he'll wake from his drugged, dazed stupor and go to the front door to greet and possibly maim the desolate individual on the welcome mat. They'll wine, they'll dine, they'll walk and talk, and the Cold War they were looking to start a moment previously will vanish into history as swiftly as the Boer War did to the Brits after World War I. The doorbell is diplomacy. It represents the supplanting of more barbaric ways by saying to the occupant, "You have been so careless as to leave cinder blocks, flower pots, and other very large and heavy objects lying around outside your house, but instead of smashing through your door, which is little more than a pane of glass, I will respect your space." While admittedly the visitor will likely go at the resident's throat once they pass three words, at least the property damage will be manageable.

The doorbell is nearly as old as the door itself and had many kinks worked out of it before becoming the smooth, precision engineered piece of Home Hardware that it is today. The first doorbell was a natural instrument: the human voice. Unfortunately, language was far more studded with profanity than it is today (legitimate things to discuss being a drastically smaller segment of the vocabulary) and so any screaming or bellowing through partitions initiated fighting effortlessly. The metallurgists of the time were able to produce a better alternative with their silent, non-power-consuming technology for motion, sound, and pressure sensing. This technology, seen in Indiana Jones and the Temple of the Great Rolling Ball (off camera) soon debuted for door belling. This incarnation soon fell out of fashion after the plunder cave incident. It seemed that the desert cave housing 40 sheaves of gold was supposed to be opened by a young, inexperienced desert carter. He said the magic password, "open sesame," and died of exhaustion trying a thousand other ideas, when tragically the gears of the door were simply gummed up with sand. After this debacle, authorities placed the doorbell on hiatus until general standards could drop. 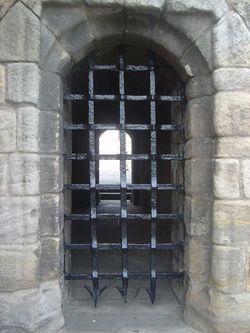 Modern castles' gates are far more welcoming than this.

The doorbell didn't get its big break until 1908, when the rich owner of several grubby-worker cork factories skimmed the executive summary he found in an antique jar, a find of his in the orient. After many weeks of grunt work with a substandard, waterfall prototyping process, the modern doorbell was born. Granted, when the boss learned his underlings had brought him a button, he laid off half his staff, but the other half did go on to create the doorbell as we know it today. There was a spot of tough selling initially, what with funds going into preparing for World War I, but a clever advertisement with a rubber chicken and a fop did the trick. Soon doorbells were being sold like hotcakes and eaten like them as well.

Doorbells come in many styles to cater to the latest trends in through-door notification:

Doorbell Classic
Smacking of "somebody's home and they left the key under the welcome mat while going out to pick up their relatives," this variety is found on most boring homes in suburbia. If a house has one of these, it is virtually certain to be mundane. And sure, the backlight on the button may look cheery enough, but it switches off when you push it, for barely long enough to plunge you into darkness.
Telephone
It's remote access. It's also a whole lot of extra expense compared to the humble bell. Why pay the bill to phone someone when you can often make just as much noise in their home by showing up in person?
The Liberty Bell
For the literal, these ones are actual bells. You ring one by moving the clapper side to side. The danger here is that once it's rung, you have no idea for whom it tolls. It could toll for the neighbour, or the postman, or even you. Heck, it might even have been molded by John Donne himself. Stay away.
Miniature Door
This model is most likely to be encountered on the home of a product designer. It is a tiny replica of a door, and you open it to ring it. It is the ultimate in WYSIWYG, intuitive interface design since it demonstrates to the clueless exactly what'll happen next.
Star Trek Console
Only found on spaceships, these futuristic models have many perplexing buttons, and if you ever do figure out how to make the thing work, it'll just elicit a "Come" from through the door. The first officer probably has an exotic sickness or a dream sequence. Better leave him alone.
2001, A Space Odyssey Console
I'm sorry, Dave. I can't let you in. There's something in the oven.
Shop Counter
These are found in shops, and the considerably more grating noise they make goes along with their commercial purpose. They count people in and out to identify potential shoplifters. Mischievous shoppers can move their hands to fool the counter, obligating the shopkeep to feel afraid of the hundreds of robbers hiding in his store.
Gag Buzzer
A personal model, worn on the hand, with an electric shock for silent notification. It got a second life as a prank.
Doorbelle
No, no, you don't want this. She's way younger than you and a bit of a vixen. Next thing you know you're in for a shotgun marriage with a fox and a country club for dowry. Back off.

The sound caused by the annoying, yet attention-grabbing physical contact between someone's fat fist and the heavy wooden door. This is the old-fashioned way to make an inquiry, for when the power is off or electricity has not yet been invented. The usual outcome of this sudden release of unnecessary energy could result in several things, such as the following:

A solution to all door opening tragedies is to merely stay in bed and ignore this knock knock sound...And heck, why not a few booby-traps to make things a little spicy...eh?

Did you know...
...World War 2 was started because Poland didn't knock?

Any bell hopper worth his weight in bells knows the proper course of action for every position of host and guest.

Visitor Outside, Host Inside
This is the most common of arrangements, and the one most doorbell board games start in. The occupant obviously hates you since the door hasn't opened yet in .002 ms. They may have mistaken you for someone you're not: a relative, a bum, a postman, a huckster. Or maybe they know exactly who you are and don't want you worsening their headache or interrupting their video game tax return session. Either way, you can trick them into letting you in by making loud footstep noises, waiting, and lunging when they open the door to check if you've left. This situation is a dream for the homeless, who favour fresh air and solitude above all.
Visitor Outside, Host Outside
Unless both individuals are blind, chances are they've seen one another. If they're foes, they'll be running for the door and tussling and ripping stuff. If they're friends, one will most likely let the other in. This, again, is done by the doorbell, eternal gatekeeper. I always ring the doorbell just before someone I'm with lets me into a house. It always works too. The bell is, without a doubt, a necessary ingredient. Pavlov first studied this when he trained his dogs to gum the locks, until they salivated so much the lock wouldn't unlock and he got stuck in the cold. With the building staring back like a monolith of modernity, serendipitously sharing the outdoors with someone who forgot her keys is a very egalitarian experience.
Visitor Inside, Host Outside
That's the spirit! Through hard work, sneakiness, or a plain old skip in the tape, you've magically arrived inside and locked the rightful owner away. Good on you. The key here is to not unlock the door; to do so would let the prince back in, and you'd lose all this cool stuff you've gotten your mitts on. The television, the CD player, the beta mix: they'd all be lost to the siren call of the bell. Play it carefully. It's a happy windfall to lock your neighbour out of his own house.
Visitor Inside, Host Inside
If you're inside, it can be quite logically deduced you've already spilled the coffee, nodded off in a potted plant, choked on a biscuit, or... something must've gone wrong! Any second, the person who welcomed you warmly a few seconds ago will be lurching toward you, backing you against the front door. They'll throw the cone at you. At this desperate stage, the doorbell may be rung many times in succession to serve as a crude call for help if your own vocal cords have gone numb from shouting at the top of your lungs over any one of scores of issues. That done, you should try to fend off the angered attacks. Here, the doorbell makes a good weapon.

I'm sorry Dave, there is a program on I don't want to miss.

Working the old ding dong shouldn't pose much of a problem. Finger out, finger up, poke, let go, right? Not so fast. First, no offense, you may be lacking in technological savvy. Sure, old fogies can't work computers, but you wouldn't expect them to have any trouble with the press-release methodology. You'd be surprised. The button's not labeled; it doesn't say, "Press here to get some attention." They might just need their hands guided to the button. Now the mind is willing, we have to worry about problems of the flesh. You could be uncoordinated, or too weak to push a button, or your finger could've turned to rubber somehow. Once you're taped up and finished with the physics of the body, you deal with the technology. Maybe the button isn't hooked up right, or the bell is under a pile of shirts, or a species of cockroach has been nibbling on the wires. Hey, maybe a particularly wily fern is covering the button.

Whatever the reason, something's gone wrong, because nobody in the house you're ringing is letting you in. You know, the house with the ugly shade of pink. It's just like my house, really....