Holding open doors is the practice of reusing the energy expended by opening a door by allowing a subject following the Primary Door Opener to pass through the same doorway before it has closed. The process has spawned such terms as the Holder and the Recipient which describe the participants of this phenomenon. Their combined social experience is also often referred to as a 'social transaction' and thus both parties are susceptible to a pleasant human experience as well as awkwardness and in serious cases, clinical hysteria.

In 1581, after having "fun" on the high seas in "exotic lands", back home Sir Walter Raleigh became a favourite of Queen Elizabeth I. A famous story tells how Raleigh spread his cloak across a puddle so her majesty could walk over it without retaining water in her shoes. Improving on his 'valiant and cloak-spoiling' incident Raleigh invented the first recorded act of chivalry towards 'E. the First' during a pleasant promenade along a corridor in her majesty's palace. Raleigh, who encountered the door first, decided spontaneously that instead of letting it close in her majesty's face, he should position his body (it has been speculated using his arm) so that she could pass through, thus exerting minimum royal effort.

The incident of the door has been forgotten but the cloak story's in now prominent in Anglo-Saxon consciousness, most likely due to it being included in Raleigh's Coat of Arms. The creator of the coat of arms recorded that 'The door didn't fit with the conceptualisation we were going for' in his estate records and thus it wasn't included. Apparently the puddle did. 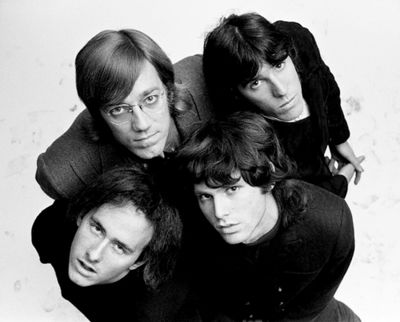 An unnecessary play on words

Richard Karaday was a professor at Bristol University in the early part of the nineteenth century. Studying this phenomenon for his PhD, he identified three distinct functional categories known as door 'zones'. The zones mark distances from the door of the prospective Recipient when the prospective Holder first reaches the target door. Ever since his ground-breaking work was published, the Karaday Zone System has been the most popular and well-used method of studying the Holding Open of Doors Social Transaction Deconstruction.

Green Zone: The prospective Recipient is at a distance from the door which would mean the Holder is forbidden by social convention to allow the door to close behind him.

Red Zone: The prospective Recipient is at a distance from the door which would mean the Holder should allow the door to close behind him.

Amber Zone: The area between Green and Red where it would be ambiguous to the Holder as to what action they should take and its accompanied social consequences.

Karaday identified a trend in portal social transaction research in what is colloquially known as 'hold-it-the-fuck-open-anyway-while-red-zoning'. When an over-zealous Holder chooses to do so, an uncomfortable situation arises: The Recipient must, by social-convention, hold eye-contact with the Holder for the longer than normal journey to the open door. This extended eye-contact reinforces the Recipient in their lower-status position as they must express their gratefulness to the Holder party. It is no coincidence that this usually happens in offices, which is the Bastion of patriarchal social transacting where upper and lower status is always apparent and not just around doors.

Under these circumstances it is not unreasonable for the Recipient to want to limit the time they are in this position - not just to rid themselves of the lower-status as quickly as possible, but to demonstrate their wish to minimise the amount of time they are a burden to the Holder. It is therefore common for the Recipient in these trying circumstances to affect a mini-jog: a for-show, awkward jolt of the body forward that is necessarily accessorised with a clear forced-smile.

The physical trauma caused by the mini-jog will often leave the Recipient with a lasting animosity towards the Holder. Because of this, many workplaces have banned the holding of doors open by their employees altogether, effectively making all doors a red zone. They even went so far as posting warning signs: "Do not assume the role of Holder under ANY circumstances". At the very least, employers in most western countries take the precaution of painting Karaday zone-lines on the floors of long corridors to ensure smooth functioning social transactioning. 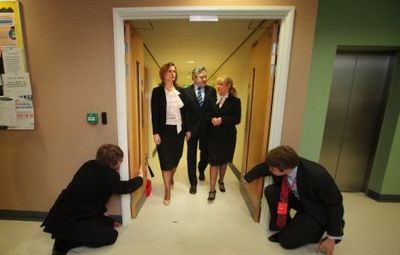 The most wealthy can afford to employ more extravagant solutions to a universal problem.

With companies taking the measures described in the previous section, Holder Zonal Anxiety (HZA) is thankfully becoming a thing of the past in workplaces. Public buildings however, are still plagued with this paralyzing, yet easily treatable condition. The term refers to the condition where a potential Holder will worry out of all proportion about making the wrong decision about whether to hold the door open. In many cases panic will set in, and instead of opening the door, a sufferer will turn-about and run back away from the door, or freeze and dampen themselves with fear-pee.

Around 7% of the population suffer from HZA, with most of these avoiding buildings altogether. Supermarkets were quick to respond the problem, being the first to fit automatically-opening sliding doors to their stores to allow those with HZA stress free access.

Throughout the years, many people who were suspected of alcoholism have in fact been suffering from HZA. They have found the only way to operate within a society obsessed with doors is to gain 'confidence' from intoxication.

A treatment advocated in the mid-eighties by chronic HZA victim and famous DJ Fat Boy Slim called Don't Look Back (DLB), instructed a sufferer encountering a door to not look behind them. 'If you don't turn to ascertain, then you wont feel the pain,' a rhyme-obsessed Sir Slim commented at the time. The DLB method instructed sufferers to keep their eyes permanently fixed forward. When they encountered a door they were to open it slowly, walk through it, and then let it go after two seconds. This method was largely discarded in 1989, when Sir Slim himself was viciously assaulted by fellow DJ "DJ Jazzy Jeff" when DJJJ used DLB on Mr. Slim. Sir Jazzy Jeff was given a mere forty hours community service for the attack with the jury told of Sir Jazzy Jeff's flawless record as a DJ / entertainer extraordinaire and that DJ Fat Boy Slim had clearly been 'green-zoning' when DJJJ DLBed.

Though treatments do meet with success they have not worked for everyone. Chronic sufferers are therefore assigned full-time nurse who 'supervises' all doorways in their vicinity. The NHS have controversially been known to prioritize these medical resources to HZA sufferers over people who are physically impaired (who usually have their doors held open by the public anyways) and children with leukemia. NHS bosses argue that without being able to negotiate a door, a human being is relegated to the functionality of an old arthritic cat. 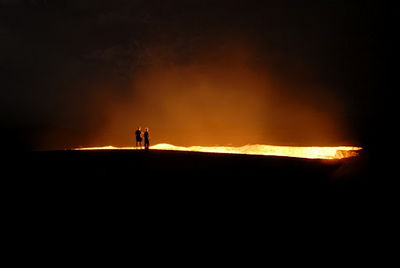 For the chronic sufferer of door-dementia, every opening and every path is one that leads to social hell.

On a Long Time Follow (LTF) a Recipient who is travelling to roughly the same place of the Holder finds themselves having the door held open for them multiple times. Recipient Gratitude Distribution (RGD) is the pattern of acknowledgement the Recipient gives through the various doors.

The receiver may use a variety of tactics in their gratitude distribution. The most common method is the 'Cascading Distribution' in which the Recipient will provide an enthusiastic exclamation of thanks on the first door such as 'oh, thank you', which will diminish with each door, often plateauing into an almost inaudible grunt.

Though the well adjusted can comfortably perform a Cascading Distribution, those less socially adept struggle to lower their gratitude levels. They will often be 'stuck on full' where they are unable to temper their thanks, and end up exclaiming the kind of thanks for each door that should be strictly reserved for a one-off door hold (were the Holder and Recipient only encounter one door).

When the Recipient and Holder are both sufferers of HZA, a 'Door Holding Race Condition' can occur. This involves an initial recipient attempting to beat the Holder to the next door in order to reverse roles thus offloading a measure of social deficit. With both participants chasing the role of Holder, what should be a walk through an office block often becomes a battle royal which may confuse and frighten fellow office workers.

While Karaday and his team are unable to explain the correlation between certain people and a lack of green-zoning respect, those who violate the social convention do tend to be fatter, more ethnic and prone to poor body grooming. Karaday hasn't yet proven the link between social outcasts and green zoning violators, though the correlation is suspected as no accident. Karaday advised Recipients to assess Holders by first determining the zone they are in, determining the ideal body weight of the Holder, determining the actual weight of the Holder and then calculating this function:

If the result is above zero, the holder will respect the custom if green zoning, if not, the recipient should expect the worst, approach the door with extreme caution and perhaps wait a moment to allow remnants of the holders body odour to dissipate. Karaday warned Recipients not to have complete faith in this formula as written at the end of his book "what sets Door-Opening-Transactions apart from other social problems is the sheer quantity of unknown variables, the terror it may invoke and the lethal finality of sustained door-holding disasters". According to Karaday, society will benefit from a door-less society and is currently testing a "voluntary door removal campaign" in Luxembourg. The EU granted him €15,000,000 to test the project and will change EU law by decree if the test is successful. Karaday is optimistic that he may see a door-less-world in his lifetime but he remains realistic. "Greater men than I have attempted the same and ended their lives jaded and bitter, instead, I will take my campaign to one door at a time and see every new victory as a victory for man and man kind.