For those without comedic tastes, the so-called experts at Wikipedia have an article about Air conditioning. 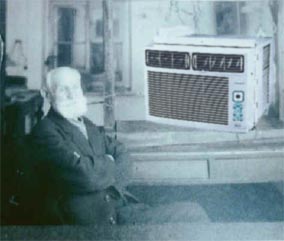 ~ a Redneck on aair conditioning

~ Some PRICK on Air Conditioning

Air conditioning refers to the process by which molecules of air are made to participate in mental training and physical exercise. The mental training is a form of Pavlovian conditioning which makes each of the molecules averse to carrying heat. The physical exercise allows each of the air molecules to travel quickly and to carry greater and heavier loads. In this way, houses and buildings are cooled. It is also included in the new reformed Healthcare Bill.

The air particles are conditioned using auditory and visual response mechanisims to carry less heat. They are shown short films on how heat ruins the world—from burning things to allowing fat people to wear really skimpy clothing. Sensory deprivation follows, with the only stimulation being a voice that says, ”Training good! Heat Bad!” (The film Zoolander depicted much of this exact process).

Once conditioned to the proper standard, air is more disciplined, tidier and more confident. Inadequately conditioned air may revert back to former habits unless given the proper supervision.

When the invention of air conditioning first came about, Air Rights Activists such as PETA (People for the Ethical Treatment of Air) began protesting the government for laws protecting air particles. They saw the conditioning of air as cruel and inhumane (or inaire).

The activist's protests were very successful until the largest anti-air-conditioning protest in the world occurred in Washington DC called the Peta Particle Parade. Every Air Rights Activist in the world joined in the protest. It was so powerful that the air itself protested alongside the activists. No one had expected it but, when the air protested, the activists were no longer able to breathe and they all died of asphyxiation. With no one in the way air conditioning became extremely popular around the world.

Since the dawn of time, man has been imprisoned in his shallow atmosphere. His constructions rarely have reached higher than a giraffe, or in extreme cases, a giraffe standing on tiptoes with a monkey on it's head who is also standing on tiptoes. The reason for this is that living beings have evolved in such a way that the tallest one could possibly reach is limited by the size of the layer of air above the Earth - whenever an animal reached higher, it immediately suffocated and imploded all at once, with hilarious yet deadly consequences.

Man Develops A Solution, Finds Another Problem, then Solves It[edit]

However, with the advent of air conditioning, Man once again demonstrated his dominance over nature, using his twin special abilities of tool crafting and heartless slavery. Air conditioning meant that air could be worked harder and harder, becoming many times more efficient. One air particle could do the work of twenty, fifty, a hundred. The sky expanded at an enormous rate as a result of this increased efficiency. This was originally thought to be wonderful, and it was not uncommon during this time to see giraffes standing on tiptoes on the backs of other giraffes, with monkeys forming vast pyramids on top. However, it is possible to have too much of a good thing, as evidenced by the old adage "you can always have too much of a good thing", and the sky eventually became so large that it was difficult to clean.

In order to solve this tough problem, Man once again employed his special powers, and used the wonders of technology and immigrant labour to construct massive "sky scrapers" - tall buildings whose main function was to literally 'scrape' the sky.

Man Tries Something Out, Finds A Problem, Then Forces People Who Can't Afford To Complain To Endure It Instead Of Him[edit]

These "sky scrapers" had a subsequent side-effect - suddenly, people realised that buildings need not be long and thin, and that with this new atmosphere they could be short and tall instead. Man's problem of shallow buildings was solved! Housing companies envisaged towering vertical cities where a person could get out of bed in the morning, hop out of the window, fall 57 stories to their place of work, and then have their desk slowly winched back up as the day progressed.

Unfortunately though, as is common with big future ideas, this turned out to be completely stupid, as the noise from the sky scraping was keeping everybody awake. Man's sense of downright money-grabbing opportunism ingenuity was not to be broken by this simple matter of quality of life, however, and soon big-business again turned to the wonders of slavery, forcing its workers to carry out their menial and ultimately fruitless tasks at the tops of these "sky scrapers", knowing full well that they would be too preoccupied with lamenting their lost innocence to notice the noise and had no choice about the matter anyway. Big-business tycoons also found themselves moving in to these "sky scrapers", as they feed on the sorrow of those they control, and they are quite willing to suffer extreme discomfort or even death if they get paid vast sums in order to do so.

And thus we come to the economic benefit of air conditioning, via the creation of the "sky scraper". The system is an evolutionary one: those who failed in business previously had to rely on dubious methods of suicide such as overdose or dissolving themselves in the bath, but with the advent of air conditioning, and resultantly the "sky scraper", suicide by intelligent falling is possible. This method is almost 100% fatal, exceptions being if the FAL (Failiure At Life) in question inhabits the ground floor, or has their fall impeded by a passing giant marshmallow. Another method of suicide is enabled by the fact that some "sky scrapers" are, by necessity, employed to scrape the very top of the sky, and therefore a disgruntled worker may top themselves by poking their head outside of the atmosphere. This method is, in practice at least, 100% effective, as no worker has yet been known to breathe through their feet.

The Influence of Air Conditioning on World Affairs[edit]

The air conditioner played a key and decisive rôle in the cold war effort, won under the military leadership of General Electric. The strategy was simple; install an iron curtain of wall-to-wall air conditioners across the Bering Strait which separates Alaska from Russia, run them at full power to blow all of the cold air out of Alaska so that nothing remains of Russia but wretched, frigid Siberian wasteland while Americans are free to sit back and enjoy their Baked Alaska. The once-mighty Soviet evil empire was left shivering in their boots at the hands of cold-war Yankee ingenuity.

The Colonisation of America[edit]

The air conditioner (often referred to as air con, AC or A/C, and not to be confused with the abbreviation for alternating current) is believed to be one of the major causes of George W. Bush being elected. Were it not for the Air Conditioner, it is unlikely anyone in their right mind would live in the South, but due to this marvel of an invention such things are possible.

It was scientifically proven by a man named Steve in 439 BCE that terrorists are funded by air conditioning and marijuana. "I discovered this unnerving fact whilst installing my Airular Unit in my window." Steve says. "We buy an AC unit and plug it in, thus using the city's power plant's electricity. But where do we get electricity from? OIL. And where do we get this oil from? A - RABS. And who funds terrorism 50% more than any other ethnicity in the world? A - RABS. This gave me the conclusion that air conditioners are terrorists. DON'T USE YOUR AIR CONDITIONING. " - Another man named Steve, 2002, on terrorism.