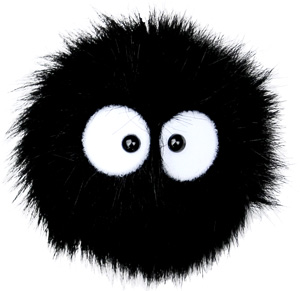 The typical sight just before being devoured

Small, fluffy, distracting and malicious - Unmistakably one of the most dangerously fluffy things you will ever come across. These devilish little balls of pure fluff are the spawn of The Dust Bunny, a giant hare with immense magical properties. These offspring, although smaller, have inherited their father's outstandingly dangerous nature, but can maintain a stealthiness on the level of ninja cats and gummy bears.

They are often found hiding under beds, or on top of ceiling fans. Other habitats for these messy balls aren't used frequently enough for an accurate description of them. Except for that one small spot of the bookcase that you can just never seem to reach, and it's annoying you like a five-year-old hopped up on sugar sticks.

If found on top of a ceiling fan be very cautious, because they will jump. They will eat. You will die. Then you will be pooped out and turned into a Grue. You really don't want to know what happens next, because its too horrible for words.

There have been many family-posted reports of children going missing in their sleep. The most likely cause is an irritable Dust bunny or two residing under the child's bed. Most cases of I-just-got-eaten-by-a-rabbit are easily found to be just that, by the distinguished half a shoe left behind in it's wake.

Most people confuse fluffy for furry. There is a very subtle difference between the two:

There are some cases where the two can co-exists. Kittens, for example, can be both cute and dangerous. Therefore creating a completely flawless killing machine.

There are many ways to put an end to the fluffiness epidemic:

As mentioned earlier, dust bunnies are the spawn of The Dust Bunny. Their numbers have grown greatly over the years, and many deaths have been a result. But due to the also increasing range of bagless vacuums, the human race has been able to subdue the rate of death by bunny.

There has also been speculation that The Killer Rabbit of Monty Python and the Holy Grail fame is in fact either a dust bunny grown immense in size or a giant collection of such dust bunnies. This is irrelevant, though, not only because it has been defeated by The Holy Hand Grenade of Antioch, but also because the people who have gotten close enough to examine it were already dead.