That guy from Hootie and the Blowfish 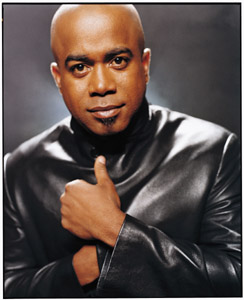 An interesting case of transforming the public's ire into sympathy. The man once known as Hootie was at the forefront of the fifth Great Music Blandening, an occasional crusade by men in suits to make sure all music on the radio sounded the same. The GMB was for the noblest of causes; without any change in the music, no one would ever have to be distracted by a song, or have to change their radio station, greatly reducing the number of accidents. But I digress. Thatguyfromhootieandthe Blowfish as a baby Believe it or not, he actually he is white.

Hootie and the Blowfish were the blandest of the bland, and made great stride in the GMB's crusade ... until one day when the public woke up and realized that, well, music on the radio sucked, and the centre of all the public's hatred became Thatguyfromhootieandthe Blowfish. This brought about the fifth Discovery of Good Bands, during which time Thatguyfromhootieandthe Blowfish attempted to be hip by releasing a solo album in which he pretended to be one of the Black People.

Later, it was discovered that Thatguyfromhootieandthe Blowfish had spent all of his money while running for Mayor of New York by convincing everyone to vote for None of the Above, and he refused to take the hat of money that his friend John Candy collected from all the various hangers-on.

Thatguyfromhootieandthe Blowfish has nothing whatsoever to do with Canada. Praise Jesus.

He is also a cowboy and lives at the lovely "Tendercrisp Bacon Cheddar" Ranch, and he likes money (and fucking bitches) a lot. (see picture)

He likes money and is a cowboy

Many have believed Thatguyfromhootieandthe Blowfish of in fact being white, and although he appears to be black, scientists have confirmed he is in fact very white. Signs of this include