The white guy in All-4-One 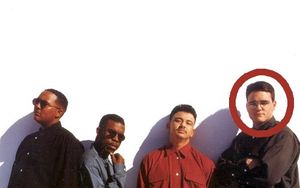 The white guy in All-4-One (circled) has baffled philosophers for over a decade.

The white guy in All-4-One (also known as Tony Borowiak) is a problem that has gripped the world of philosophy since the mid-1990s. The debate began when R&B group All-4-One scored a hit with "I Swear" in 1994, and has since grown to encompass issues of identity, meaning and being.

Although the question appears simple on its face, any attempt at an answer leads to additional questions, which lead to more questions, and more, and what Aristotle would describe as an "infinite regression." Many writers have called the white guy problem "the first great dilemma of the 21st century," as a decade of debate has not provided an adequate definition of his role in the California-based group. While some despair over the solution to the problem, others feel that raising the question itself is vital to understanding the post-modern mind.

For those without comedic tastes, the self-proclaimed experts at Wikipedia have an article very remotely related to All-4-One.

All-4-One's first single, "I Swear," zoomed up the charts in 1994. In the accompanying video, group members Jamie Jones, Delious Kennedy, and Alfred Nevarez repeatedly vowed to love you with every beat of their heart. The trio did not, however, explain why a tech support guy was following them around and joining them on the chorus of the single. Although the white guy did not take a solo in the song, he did look at his surroundings and engage the other members in conversation.

An All-4-One album cover, with the mysterious white guy second from the left.

The group's second single, "I Can Love You Like That," further muddied the waters. Although the white guy's role expanded to sticking his hand up and pointing to the right, he remained in the background as the other members of the group discussed the methods with which they could love the person to whom the song was addressed, while positing that they could "kiss and hug" throughout eternity. Though these assertions seem ludicrous at first, in fact, these metaphorical "kisses" and "hugs" may in fact hold great insights into the arguments of Boethius on the nature of God and suffering in an incomprehensible universe. However, this failed to address the bespectacled white man's purpose, or explain why he had learned their choreography.

The band continues to tour and record, though its popularity has ebbed from its Clinton-era zenith. Despite repeated requests from authors around the world, All-4-One refuses to address the question of the white guy's role. This leaves the intellectuals of the modern era no choice but to continue the debate.

The question, What's that white guy doing in All-4-One?, is not easy to answer. The obvious solution, "Nothing," is inadequate: Logically, the band would get rid of him and his share of All-4-One's enormous profits if he did nothing. On the other hand, the white guy can not be doing "everything" (as the The New Republic once argued), because then he would not need the other three with him.

One can rephrase the question as What does the white guy do in All-4-One? This brings more satisfactory answers, but raises more complicated questions. He appears to back up the other members on vocals, but does not sing on his own, which suggests he is replaceable. Yet All-4-One's lineup has remained stable, meaning the white guy must perform a vital (though unknown) service for the group. Many suggest he plays a racial or multicultural role, noting the older dilemmas of "the black bass player in the Spin Doctors," "that spooky hottie in Smashing Pumpkins" and Art Garfunkel. Others, however, have noted that the people in all these cases had visibly defined roles in the group, where All-4-One's white man does not. 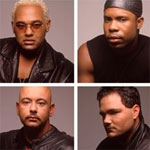 The white guy may serve an essential function in the group, allowing them to keep the '4' in their title.

Different schools of thought have naturally taken different approaches to the question.

Absurdists believe that the white guy's presence in All-4-One is a clear sign that man exists in a mad and unknowable universe, one that put a dumpy white guy in a Boyz II Men-type group.

Deconstructionists state that the answer to the question lies in a close reading of the name All-4-One. Noting that the for in the name has been truncated by outside forces, they say other words have been altered to mask the real reasons for the white guy's presence. Jacques Derrida carefully analyzed the group's appearance on the soundtrack to Disney's The Hunchback of Notre Dame in 1996, and suggested All-4-One's real name may be (Society demands that minorities be crushed), All-(for)-One (white man).

Existentialists turn the question on its head, noting that All-4-One is absolutely indifferent to our existence and the meanings we impose on its white guy. We have the freedom to choose our definitions, but with this freedom comes a terrifying realization of our meaninglessness in relation to All-4-One. Efforts to discover the white guy's purpose, therefore, are doomed to fail. Some, however, believe the existentialists are projecting their own qualms about modern society onto the soulful quartet.

Marxists say the white guy's presence in the group can be understood as the process of centuries of class struggles over the relations of production, the white guy being the last vestige of the bourgeoisie in the proletarian group. To date, no one has been able to follow this argument.

Thomists believe, among other things, that the white guy's presence in All-4-One is guided by a force beyond the universe and that we human beings have a natural inclination to want to understand his role in the group. This approach has won a great deal of praise, though it doesn't answer the question.

Utilitarians generally argue that one should strive to maximize the overall good done for a population, in this case, the band All-4-One. They therefore conjecture that the white guy exchanges some beneficial service for the group in exchange for choreography and chorus-singing opportunities - perhaps helping them update their PCs' software or serving as their accountant.

Conspiracists believe that the white guy is not actually in the group at all, but was added to the videos and album covers using state-of-the-art image modification software devices. Their reasons for this are purely conjectural and their arguments are often unsanitary (since the facts are so often pulled out of nearby asses).

The controversies over the white guy's presence show no signs of flagging. In an Atlantic Monthly essay in September, 2005, critic Harold Bloom suggested that this was necessary for the good of society as a whole, however frustrating it may be to the researchers. "Perhaps the white guy in All-4-One mystery was not meant to be solved," he wrote, "but to exercise our minds and expand our understanding."