Creepy guy who lives across the street

From Uncyclopedia, the content-free encyclopedia
(Redirected from That guy down the street)
Jump to navigation Jump to search 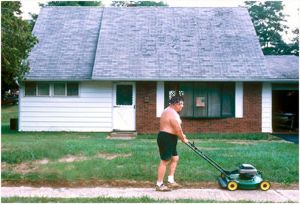 This was taken with the old digital camera. As soon as I figure out how to use the new one, there's going to be a lot more detail.

Little definitive information is known about the creepy guy who lives across the street, other than his last name ("Walters"), and his general appearance - white, about 5'10", heavy-set, dark-haired, and generally unattractive. He purchased the small, two-bedroom home approximately ten weeks ago, and after having his belongings loaded in by professional movers, he has only been seen outside when getting his mail or mowing his lawn. He owns a Buick Regal, but has never been seen driving it. 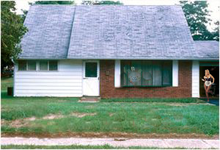 Sometimes the nun exits through the garage.

Even casual observation reveals that the Creepy Guy leaves his large-screen television on essentially around the clock. It is difficult to determine what channel he has it tuned to because of the glass curtains covering his living-room window, but it appears to be one of the major 24-hour cable news channels, or possibly C-SPAN. (The volume is too low to hear from the sidewalk; attempts made with a stethoscope and a super low-impedance pinpoint-directional shotgun mic were less than successful.)

Lights are turned on and off in the Creepy Guy's house seemingly at random, or as if they were programmed in some way. One explanation for this may be that the Creepy Guy owns a remote lighting controller of some kind, and plays with the buttons when he gets bored.

The Creepy Guy receives no visitors, except for one: a nun, who appears roughly between 5 PM and 6 PM each Friday evening. She appears to be carrying nothing when she arrives, stays for only about 5 minutes (the longest visit was 7 minutes 47 seconds, according to the stopwatch), and also leaves empty-handed. The nun could be a relative, or a charity worker of some description, but she has never been approached or identified.

How the Creepy Guy obtains groceries, general-purpose household items, and other supplies remains a mystery. While boxes are occasionally delivered, the number and size of the boxes appear to be insufficient volume-wise to feed one person, even assuming that all the boxes contain foodstuffs. Moreover, the Creepy Guy does not sign for the boxes, even though he is always at home. Instead, he waits, and opens the door to retrieve them as soon as the UPS or FedEx driver leaves.

On occasion it seems that the Creepy Guy stares into your house uneasily while on the computer, before typing about it on a website that appears, according to your binoculars, to have a potato in the left-hand corner.

A picture of the Creepy Guy's bedroom, after successfully breaking into his house. Of particular note is all the equipment. He then chased me out with a baseball bat and threatened to call the police. Weird.

The plan regarding the Creepy Guy is to do nothing - for now. Clearly, it is vital that the plan remain flexible, in case the Creepy Guy should pose a danger to the neighborhood. Extreme and continued vigilance is clearly called for. If you should notice anything unusual about the Creepy Guy, anything whatsoever, please report it to our toll-free Creepy Guy Hotline at 1-888-CREEEPY.