That kid at the mall 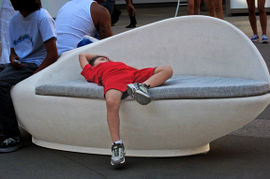 HUNTER, GET OFF THAT BENCH RIGHT NOW BEFORE YOU HAVE ANOTHER BRUISE TO SHOW FOR SHOW AND TELL!!!

Who is that kid at the mall[edit]

That kid at the mall is a boy who is still a minor. He is very short in size. He has a high pitched voice, regardless of age. He has brown hair and always wears a puffy winter jacket in the winter, in the summer he will wear this T-shirt indicating a sports club that he is unaware of. He has this name that you see sometimes on TV shows like Hunter, or Terrence, or Shawn. His favourite food is chocolate bars, Pop Rocks, chips, and Chinese food. His bag is almost always black or red, and carries stolen video games and porn.

He will always be with his mom. His mom is a chubby woman with marks on her face and freckles with curly black hair. She is often described as a whore, so compare characteristics to see if she is one.

Where they can be spotted[edit]

That kid at the mall can usually be found in big name stores like Sears, JC Penney, Target and Wal-Mart. He will always be whining and causing a commotion somewhere. He will be begging for a toy or something that he'll use like fucking once before he abandons it. Then if he dosen't get his way, he'll whine and run away to look at video games. The mom will feel bad and offer him a chocolate bar. Most obese people used to be that kid at the mall.

Another place you can find that kid at the mall is the food court. They'll always go to McDonald's and get the kiddie meal. And that kid at the mall will refuse to eat it. "NOOO", he will whine, "I don't want that! It's icky and stinky!" He will start screeching. By this time, about two young couples will move seats and give that kid at the mall an awkward look. That kid at the mall will then start chewing with his mouth open and yelling at his mom saying weak sware words like, "you're stupid" and "you're a poopy!" He will then ask for a Baskin Robbin's ice cream. He will be told no, and that kid at the mall will run away to some random table and pout. He will then ask for money and always add that his mother is a 'bum-bum'. He will also add a 'pwetty pwease'. He will usually run up to an elderly couple or a woman with her friends. The adult he runs to will bring him back to his mother's table and the mom will apoligize. The adult will explain that it 'happens all the time'. Then the mom will start acting all relieved and will apoligize. It's the same apology all the time: "No, no, it's alright. Thank you. Here's 5 bucks. No, no, take it, as a thank you. Counseling? Uh...yes, i'll look into it. No, I don't want to sign up as a pole dancer...well, thanks again, bye." She will proceed to yell at the kid and he will cry until they leave. They will usually have this old beat up Pontiac. 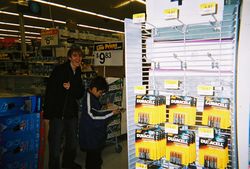 Dealing with that kid at the mall[edit]

Sometimes, while that kid at the mall will be having his tantrum, he will notice you glancing at him. And laughing at him. And taking a video of him with your cellphone. And posting the video on YouTube. And getting 100 000 views on that video. And the kid won't like that. He will stick his tongue out at you. "NYAH!" If you are with your friends, say something macho and cool to the kid to try to make yourself seem better. The kid will say one of those weak swear words at you. "POOPY FACE!" His face will be scrunched and red. He will run up to you and give a pussy slap. Then he will yell at you. It will be very easy to defend yourself against that kid at the mall. All you need to do is tap him lightly on the forhead. He will whine that you touched him. If you are with your girlfriend and your girlfriend touches him, he will whine about cooties. Start laughing more and send the video to your friends. His mom will eventually show up and give you that same apology. In the end, you get worldwide fame as the uploader of your video.

Another hilarious one is when his single-mother (who you actually wouldn't mind dating if it wasn't for her son) is trying to pick up guys. The brat will usually run in, kick the man in his crotch, and shoot him with nerf balls while he's down. The mom will alert the child of his behavior and tell him that if it continues "they will skip mommy-and-me time tomorrow." the child will usually go into temper mode and take his anger out on the innocent boyfriend.

Another funny place is costumed mascots. Some company you've heard of ony three times shows up and brings a mascot with them for the kids. That kid at the mall will refuse to have his photo taken. A big argument will take place. Meanwhile, the teenagers inside will be sweating their ass off and waiting patiently for their paycheck of $ 4.00 so they can get that new CD they've wanted for a month or so. But that kid at the mall isn't finished. He will scream that he thinks the mascot is a 'peepeeface'. The mother will scoop up the kid and put him into the mascot's lap. What will be taken is a shit picture of that kid at the mall pouting. To finish the day off, that kid at the mall will kick the mascot in the nuts. Which explains why most mascots are teenage guys who don't have girlfriends. 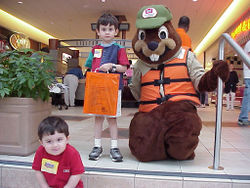 When they are not at the mall[edit]

That kid at the mall does not live very close to you, but you see him sometimes in the summer riding on his bicycle by your house eating a Haagen-Daas. He lives in that street close to the park. You see him there too, complaining to his mom that he's tired.

His mom is apparently single. Her boyfriend left her when she was pregenant. She has nothing else to do but go to Second Cup and get those cheapass deli snadwiches that stay out for three days. When at Second Cup, she will get that kid at the mall a cookie to shut him up. When he is told he can only have one, he will start his routine again.