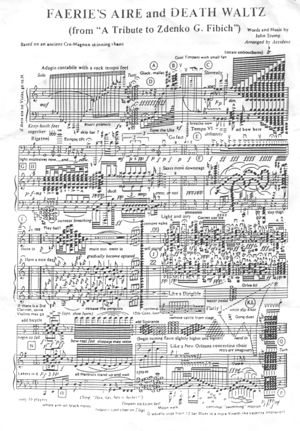 Not every piece conforms to the rigid rules of music theory as well as this one.

The theory of music is a popular theory that is based on the presupposition that sound should be broken into a defined number of quantifiable frequencies, and with these defined frequencies, a system of "acceptable" mathematics can be attained. This article does not refer to existing music; instead, it relates to the composition and notation of it, within this said system.

Like ketchup, sound is measured in Heinz. Pythagoras (c.a. 580-581 BC), noted that a tuning fork makes a different sound when it is sustained in a block of ice. Hence, he correctly identified that temperature affects pitch (how high or low a sound is). Pythagoras discovered that the pitch of a note times a numerical constant, equaled the cube root of a fraction whose numerator is the additive inverse of the acceleration due to gravity plus the multiplicative inverse of the height of the nearest tree and whose denominator is the square of the temperature in Kevin Bacon (1/6th of a degree) plus the integration of the chemical model of sugar divided by the temperature, also in Kevin Bacon. This model has proven to be irreducible. Both sides cannot be divided by C, as C might be a variable that equals zero. And if you used your ears in history class like you do to listen to sound; you should know that Pythagoras was a math magician. As well all know, math magicians do not like when fools foolishly divide by zero. It is NOT ACCEPTABLE. Therefore, you must write this all out.

The pitch of a sound is determined by its Heinz value. A lower value has a lower pitch, while a higher value has more higher pitch. (Not unlike that of me when somebody puts too much ketchup on by BK) 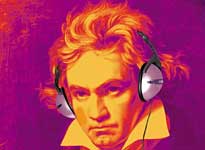 The staff in Music theory is used to show pitch. The girly sounding pitches that only the lead singer of Maroon 5 could reach are placed towards the summit of the staff and the lower pitches that I can induce your mother to make in bed are placed at the bottom, much like third world countries on Totem Poles. The staff consists of five parallel lines, which produce four empty spaces between them. Notes above or below the staff are called Ledgers. Vertical lines drawn perpendicularly to the staff are called bar lines. They separate music into measures.

And why do I have the sense that you're getting a little more turned on every time I say staff?

The piano is the central medium of music. A regular piano consists of 88 keys, racially segregated into black keys and white keys.There are a lot less black keys than white keys, and white keys are used more. Several compositions were displeased, especially African American musicians. This spawned the creation of rap music. This is also why almost every single rapper never uses music theory.

Once, in Denmark, a piano was created which had one extra key between E and F, but sadly this never really caught on.

The central element of tonal music are notes, and should not be confused with notes that you pass around in class. By pressing a key on the piano, a note is heard. There are seven notes, which start on ALPHA and repeat throughout the course of the piano. These are traditionally known as: α, β, γ, δ, ε, ζ, and η. For simplicity's sake, however, A through G are used. To establish a particular pitch for a note, however, clivvies are used.

Clefs are symbols used to signal which pitches each note is played in.

A G clef, or a Treble Clef, is probably used most often. A C clef rudely slices through the middle of the center of the clef. The F clef fails to show any significant progress in music, much like your grades in Chorus because you sound like Lil Wayne singing.

I'm on the outside. I'm looking in. I can see through you, see your true colours...

Flats, Sharps, and Naturals and superjumps[edit]

Notes are also used to show duration. The basic note is a whole note, which divides into two parts to become a half note. The rest of the values are also divided into two. A diagram exhibiting the other values are listed below:

If notes are under the same beatnik, they are group together, as such:

Time siggies are the manifestation of time classy-fictions into quantitative values.

A time siggy has an upper number and a lower number. The upper number shows the number of beatniks per measure, while the lower shows the ritalin value. Let's discuss both. Form your discussion groups!

Nowadays, Time Siggies are no longer in use and have been replaced by common step-time (aka 4/4 time).

Music is composed of various symmetrical gaps based on the weight of the object on the musical scale. Below is a list of Many of the intervals on the Musical Scale:

In addition, at the end of the 17th century, the following intervals were expunged from music:

The exact date when rests were invented is disputed, while the existence itself of rests is also highly disputed, due to the fact that we know real musicians never need to rest. But some agree that rests are distributed throughout the score in order to make it possible to scratch oneself during a performance should the need arise.

Real musicians place the invention of rests near the beginning of the 19th century due to the fact that basically every other child was a prodigy during that time. As many diseases such as chicken pox became relevant around that time and the need to scratch prevailed, it became apparent that parents were not to exploit their children's talent if their child had this disease simply becausee the need to scratch was simply too strong. It overwhelmed the music industry. To solve this problem, The Federation of Parents With Gifted Children (FPGC) randomly removed notes from a score and replaced them with random signs that later became known as rests.

Rests became used frequently during the introduction of Rock and Roll music. Since many rock stars smoked crack and marijuana and were constantly seeking breaks from shredding in order to eat.

Contrary to popular opinion, chords are not formed from intervals, but rather, intervals are formed from chords. In any case, it makes the most sense to start with Harmonic Progressions, then go to Chords, then to Intervals. Why? I'm the teacher, that's why! God I need more ritalin...

Good harmony is like watching an old man walk without farting. Well, sort of. That's only half of it, really. You see, harmony consists of tension and release. So as good as it must feel not to have Great Uncle Oscar let off steam in your immediate vicinity, there's bound to be a release sooner or later. And that's the essence of harmony.

If you didn't read the above paragraph, you might wonder why people don't like studying harmony. Well, in addition to what was stated above, students of music theory often face incomprehensible jargon such as the following:

(Note that I've chosen a key where both Caucasian keys and African keys are used, to avoid racial discord. I suggest you do the same. Well, that and because A major works well on guitar. So does C major, incidently. And of course if you use a capo, you-
That reminds me of something funny that happened down by the Cape. There was this squirrel- Cape "Cod", I think it was. Anyways, there was this squirrel and we tried to pet it but it didn't like it at least we think it didn't cause it ran away and that was the same day we went on the Ferris wheel which was a really cool movie y'know "Ferris Wheeler's Day Off" and...

A chord is produced when between one and 145 notes are sounded together. Stravinsky increased the upper limit just to be different. The typical kinds of chords used in contemporary composition are:

The original general idea was to place both elbows down on the piano and see what happens. When performed, more often than not one of the chords listed above was produced. If not, you have inadvertently played one of the forbidden combinations, as defined by the theory of Euclidean space. The combination of sine and cosine waves emitted in sync will cause irreparable hearing damage and is notated thus:

A triad is a chord played with three hands. For your assignment you must find out where the third hand came from, class...

Harmonic Progressions, Once Again, and Hopefully for the Last Time[edit]

The key (not to be confused with what "key" a song's in or the "key"s on a "keyboard") to harmonic progressions (a.k.a. chord progressions) is the Sickle of Fifths. In other words, power chords...

(Oops, I wasn't supposed to tell you about chords until I finished with progressions. Well, what's the worse that could happen?)

So, yeah, all harmony is based off of power chords. But if you play a piano, you probably don't care about that. So I'll continue:

To write a chord progression, first pick a key. (No, not the key meaning the "key" to something. And no, not the "key" that you pluck on a piano. No, I'm talking about a musical "key", which is something like a 'Cale, which will be discussed later. Much, much later at this rate.)

Let's say we pick C major ("C" stands for Caucasian). Next, look at the Sickle of Fifths. I know we don't have one here, just imagine one in your mind and be careful your brain doesn't get cut. Now, to write a good chord progression, start by picking every chord from C major clockwise until you return to C. Now play them. If this sounds strange to you, it's because your music is too simple. Try this: Add 1 to each chord. Don't ask me what "add 1 to each chord" means, just do it! Now you metaphorically mash your chords together in a ceramic cooking pot with some pepper, tomato sauce, and some portabello minor chords. It might metaphorically resemble spaghetti. Add water. Boil for ten minutes. Think about penguins while you wait. Write down what you're feeling on some garlic bread sticks. Add the chord confection. Sit, serve yourself a plate, and eat. At least that's how it's supposed to be done.

But as any good composer knows, rules were made to be broken.

The Pentatonic scale is a five tone scale as opposed to the normal diatonic scale as opposed to the chromatic scale as opposed to the fish scale. The Pentatonic Scale originated in east Asian music in the 12th century. This caused a musical breakthrough throughout Asia. Some consider the Asians primitive in the Musical area as they use a simpler "5 tone scale" rather than the Western traditional "7 tone scales." Larry King once interviewed a Chinese musician asking, "So, I hear people talking about your culture hasn't advanced much in the musical world as your still using pentatonics, am I correct?" The Asian musician replied "Oh, not at all, the truth is that we use pentatonic because we don't need seven notes to make a song as we don't need five hands to change one light bulb. Nor do we need five plus inch to deliver her a pinch in bed. We small but we bring all." The notes of the pentatonic scale are "Wong", "Si", "Chow", "Ming", and "Yong".