A choir, chorale or chorus is a musical ensemble of singers, and although usually individually talentless, through careful manipulation of groups of different vocal types the combined voices of all the members creates a kind of audially pleasant harmony... or tuneless dirge.

Choral music, in turn, is the music written specifically for such an ensemble to perform. Choral music is written in parts. These parts, however, relate more to the role of the specifically labelled group rather than the singers of them who are normally all middle ranged singers with no actual ability in music.

Nonetheless, the choir master will determine wether that individual is better off singing the slightly higher or lower part just because theoretically the overall chord the combined voices make actually sounds alright.

Choirs probably started in places like Stonehenge in megalithic Britain. A ceremonial gathering of people would chant some ritual dirge to appease the gods before they sacrificed a virgin at an altar. This was carried out in order to draw the attentions of the deities to the far greater act of human sacrifice that was to follow. The singing therefore made the sacrifice a holy deed and offering to the gods as opposed to a mere random murder, and this dedication to the gods would lead to a blessing being given to all members of the congregation and would ensure a good harvest in return for the pure soul of the virgin.

This use of a gathering of singers for religious purposes therefore appeared to be a good idea.

Choirs sprang up all over the world thereafter in relation to sacrificial and other ceremonial events, and over the ages became increasingly refined. The Greeks, Romans, Celts, Vikings, Aztecs, Mongolians, unheard of tribes in Africa and Amazonia all employed groups of singers to appease their various gods before they sacrificed an innocent civilian; and thus choir music became an integral part of worship.

Also, in parts of Asia, most notably in Tibet; choirs of monks evolved that did not use human sacrifice (or at least that we know of) and whose members performed holy chanting to themselves and other members of that choir in order to attain enlightenment or ultimate egotism. These early choirs became popular well before the time of Jesus, and this form of archaic, egotistical, monotonous single voiced choir remains unchanged to this very day.

Tibetan monks usually sing just one note that can range anywhere from G2-G4 (the usual baritone range), and sustain that note for as long as they can until they actually run out of breath. The songs usually also comprise of just one word, "Om" which actually translates as; "I am so far up my own ass that I don't care about you or anything else other than my own assumed holiness"

After the Church conquered most of the world (apart from Sweden and other Viking nations), in 782 A.D, a certain British monk named Beerfroth the Unsober became curious as to why all of the heathen Viking raiders were getting drunk and singing dirge dedicated to Odin before they massacred and raped their way through the English costal tourist resorts. 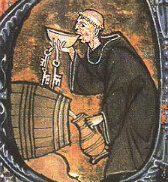 Beerfroth the Unsober - the guy who founded the monastic choir

Beerfroth realized that somehow this singing was related to their religion and there appeared to be some connection between this and their success at raiding, so he later went back to his monastery and thought about it.

After a few hours of careful meditation, he discovered that somehow groups of singers appeased the mythological deities to which these songs were dedicated, and this caused the singers of them to be blessed in return with supernatural powers by the deities in whatever sport they required these abilities in, be it murdering, raping, drinking or otherwise.

Therefore logic followed that if songs were sung and dedicated to his own mythological deities aka God and Jesus, then he and all of the other monks of his monastery would also become blessed, maybe even blessed by God with the exceptional powers to drink three gallons of mead without falling asleep and having their eyebrows shaved off.

So Beerfroth talked it over with the other monks, and they decided to write some liturgical chants for multiple voices dedicated to God and Jesus. And this is when basis of the modern choir came into being.

Monasteries, consisting only of men, had little variation in music. Particularly since most men and therefore most monks are baritones. The original monastic choir was therefore limited for parts and, although there were some songs with multiple roles, each one of these roles was simply a subtly different variation on the original flat, dull monotonous tune and could be sung by any regular baritone.

These type of role playing songs arose because monks played around with stacking slightly different dismal tunes on top of others; and this came to be known as polyphony - or many voices. However, after the black death, the only music produced by any monastery was standard dirge used to ward off the plague.

Monks took this dirge and made it polyphonic too. That way it became a means of asking for God's blessing against the plague.

Some monks they found, besides the standard dirgy baritone voice, had tenor voices, and some were bass (voice); but these three parts alone still were not good enough for a full sound. 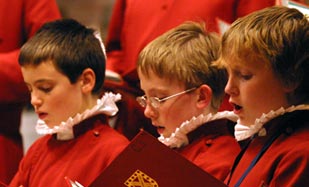 It was then that they had the bright idea to let little pre-pubescent boys into the cloisters.

This proved to be a great idea. Now they had the girly high pitched treble sound from choir boys as well as having young boys to bugger. These little catamites soon became a firm favorite of the Catholic priests who still enjoy buggering choir boys to this very day.

The choirs performed in churches outside of monasteries to demonstrate how this style of singing was holy and sacred, and later on, they found that having these young boys castrated meant that they could have adult choir boys that never actually went through puberty, which proved to be immensely handy. Castration of boys for choral purposes soon became popular. Many pieces of music were written for eunuchs including later pieces by famous names in classical music such as Bach and Mozart.

The Development of the Choir[edit]

Over time, choirs spread outside of monasteries and some even started to take on actual women as an alternative to castrated males and choir boys. 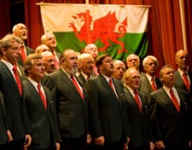 This was probably due to the fact that castration for the purposes of singing fell out of fashion quite possibly due to ethics.

Today, although most choral music is still written in praise of God, Jesus and other mythological deities, there are one or two other songs that they perform too, namely patriotic dirges. Choirs are a popular pass time for middle class, middle aged people and anyone who is Welsh.

As a matter of fact, places like Wales are particularly fond of choirs, particularly male voice choirs; and young Welsh people are encouraged to sing from a very early age. Choirs are so revered in Wales that they have merged with the cultural identity of the place, and even the DNA of every Welsh person. This inbred choral gene simply means that every single Welsh person can sing naturally and will tell you what type of voice they have and which choir they sing in, usually beginning with Lllllllllllll (which is pronounced like you are coughing up lung butter).

Choirs consist of groups of singers labelled soprano, alto, tenor and bass (voice), although in reality, baritone and mezzo are in fact more accurate descriptions of all choral parts since these are by far the most common vocal types being boring and middle ranged.

As a matter of fact, choir music for four parts never actually goes above or below baritone (men) or mezzo (women)'s highest or lowest notes, and because of this fact, could just as well consist of two sections labelled 'men' and 'women'. However this option is too boring to consider, and would ultimately annoy pretentious composers who like to show off their skills in stacking voices.

A choir usually then subdivides these parts into 8, simply to prove that it actually contains other vocal types than simply baritone and mezzo:

The extremities in the 8 parts will then get to sing even higher and lower notes than the standard used in four part just to prove that they can, although the two middle groups of each gender will just sing blandly and flat like they always do.

Aside from standard choirs, there is the male voice choir; which will contain not only the usual tenor, baritone and bass (voice); but will also have counter-tenors (castrato) and contra-bass to give an extra high and low dynamic.

Choirs also use soloists; the odd member that can actually sing. These rare individuals are highly prized in choirs and can be any voice type whatsoever.

There are solos written for soprano voices that go so high that only dogs can hear, suchas Mozart's Popoli di Tessaglia and likewise with basses, so low that the room starts quake and disintegrate. Do not reject me in my old age is one such song that goes down to G1 - an entire octave below a common or garden baritone's lowest quality note.