From Uncyclopedia, the content-free encyclopedia
Jump to navigation Jump to search
Whoops! Maybe you were looking for communists? 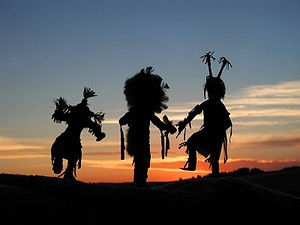 The Red Army Choir™ was the official war-path chorus of young Native American braves at the close of the 19th Century in North America. An amalgam of adolescent tribal members of the Navajo, Apache, Comanche, Pawnee, and Pwn'd, the Red Army Choir™ traveled between American states, Canadian provinces, and numerous Indian reservations singing the hymns and chants of the Great Spirit. They would then typically yell "Geronimo," and charge headfirst into United States Army cavalry formations, thus leading to their decimation by 1897.

The Red Army Choir™ formed in 1872 during the Indian Wars on the American Great Plains. A Native American leader with a striking tenor voice, Chief Singing Bull, determined that the wholesale slaughter of the "red man" was due in large part to a lack of Native American rhythm in the face of American Army buglers during cavalry charges. Singing Bull gathered his 20 braves with the best voices in his tribe and trained them to sing and dance with wolves while shooting arrows from horseback. This encouraged other members of his tribe, and even the warriors of other tribes, to fight while singing. Native American warriors thus won several key battles, such as the Battle of Little Toot Your Horn and the Battle of Wounded Knee Brace.

At its height in 1883, the Red Army Choir™ boasted almost 200 members (approximately 70 altos, 45 tenors, 30 bass, 20 sopranos, and 35 little big men). The members would give a minimum of 5 performances a week in venues ranging from wigwams on the range to show palaces in Reno. 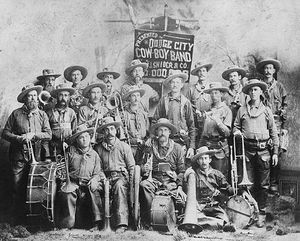 The arch-rivals of the Red Army Choir.

In the 1880's and early 1890's, the Red Army Choir™ developed a rivalry with another itinerant group of Old West musicians: the Dodge City Cowboy Band. The two groups would show up at local high school football games in North Dakota and Saskatchewan and perform on opposite sides of the field during halftime. The rivalry persisted until the Red Army Choir™ "went native" during a particularly contentious game and scalped the entire band.

The Red Army Choir™ had two functions: first, to raise the morale of young Native American braves facing near-certain death against the might of the U.S. military; and second, to raise funds for the various sponsor tribes by selling Red Man chewing tobacco to white settlers on the plains. They accomplished the second goal exceedingly well, and gave up pushing Red Man on the white man only when they discovered they could make more money opening casinos on their reservations. As for the first goal, well, see the "Decimation" section below. 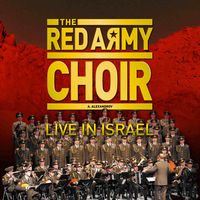 Note the star and the backwards "R", which are required by the court's ruling. 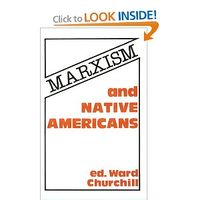 Read this book for an in-depth treatment of the trademark dispute.

After the last of the Native American members of the Red Army Choir™ were wiped out in 1897, the name "Red Army Choir" fell into the public domain. Then, in 1926, a group of Ho-Chunk tribal members in the state of Wisconsin, USA, opened the first Indian gaming casino on their reservation lands. As a promotional gimmick, they revived the Red Army Choir™ with a mix of singers decked out in Indian Brave garb and Vaudeville black-face. The Choir would travel amongst the gaming tables in the casinos singing to the dealers.

By this time, the fledgling Soviet Union had founded its own military marching band, also known as the Red Army Choir. Tensions flared when the Soviet and the Native American Red Army Choirs encountered each other in 1933 while on tour in Greenland. A basic disagreement over who had the right to use the name "Red Army Choir" erupted, and was not resolved until the Native Americans filed a trademark lawsuit in the United States District Court for Guam. The presiding judge, Judge Dredd, resolved the case with the wisdom of Solomon: his ruling decreed that the Soviets could continue using the name, so long as they used a backwards "R" in the word "Army," and made sure that other Soviet symbolism was prominent in the wording of the name. The Native Americans, meanwhile, could use the normal spelling/writing of the name. For more details, a full treatment of the dispute is found in the book Marxism and Native Americans. It is worth noting that RED ARMY CHOIR™ v. RED AЯMY CHOIR™ was a landmark case insofar as it marked the first instance of the Russian Reversal in American jurisprudence.