Funerals: the only use for dirge prior to 1963

A dirge is a kind of miserable music, usually a funereal piece or the song that led to that funeral. It is written mostly in the minor key, uses many flats and a few sharps and contains very little note variation; in short- happy happy joy joy.

It is derived from the Latin 'Dirige', which translates as 'suicide music'.

A dirge can be played by various instruments of low to middle range; such as on bagpipes or another wind instrument; but is usually sung by Leonard Cohen or goth men that can produce that same low to middle range (baritone) monotonous dreary drone. Any other musical range just will not do. It must be flat and devoid of all tune and emotion also

Dirge was invented in Medieval England during the black death. It was actually originally a symptom of the disease; the groaning, which in the latter phases hailed the onset of giant, filthy, pustulent buboes in the groin.

This groaning was then translated into (anti)musical notes and written into pieces of music by monks who were under the illusion that if you sung a dirge, you could ward off the plague by means of this homeopathic innoculation of sorts...

So dirge was born; and since that time, it became increasingly unpopular and only ever used at funerals.

The Rise of Leonard Cohen, King of Dirge[edit]

People forgot about dirge over time, as it was too boring and tuneless to remember; and nobody outside of the Catholic church and those who are involved with funerals really cared about dirge until 1963 or thereabouts, when Leonard Cohen contracted a mild form of bubonic plague when bitten by a wild hobo in Montreal.

As he lay sick in his bed sweating buckets of bile through his sheets, depressing songs in a series of dull, flat dreary groans started dribbling out of his mouth, and he got his dog to write them down for him. When he had recovered, he took these songs and decided to play them to the public just to see if anybody actually paid any attention.

These songs were an instant success, strangely enough. It appealed to certain depressive types and overly emotional women who, before that point, had never heard of such music with the phenomenal power to cause spontaneous suicides.

So Leonard Cohen was crowned King of Dirge; and to this day even at the age of a few millenia, still moans and complains depressingly in a moldy, gray tone. 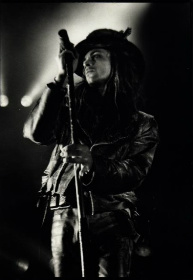 Another famous baritone; Carl McCoy of Fields of the Nephilim dirging

Leonard Cohen inspired many young angst-ridden minds in the early days; and these young minds grew up to be known as goths and Morrissey.

Dirge, the Gothic Church and Goths[edit]

The miserable dirge soon became popular amoungst certain types of depressive people who felt a certain deep level of understanding and empathy towards the dismal groans, and whole sub-cultures were founded right up to the present emo.

As a matter of fact, the original dirges preserved in ancient church manuscripts from the black death have recently crept into the public ear. Dies Irae is one such monotonous dirge that recently leaked out of the cloisters.

Dies Irae- translation: 'Doom is upon us'. From some archaic monastic dirge and written for the baritone voice

Middle aged lovers of classical music buy this kind of monastic chanting without realizing, and later wonder why they were then drawn to wear black and buy tickets to see Sisters of Mercy...

The church keeps many such monastic and archaic dirges. Many of which they dare not allow to escape their monastries for fear of a gothic revolution; and as a matter of fact, in architecture, many medieval cathedrals and churches were built in the gothic style which is no mere coincidence.

Leonard Cohen inspired many young angst-ridden minds in the early days; and these young minds grew up to be known as goths and Morrissey. Goth is therefore synonymous with dirge. And all related music and culture.

Disambiguation: the word dirge is also used as an insult in the brainwashing mmo World of Warcraft, and the term in the game derives from a low grade epic dagger made by blacksmiths which was utilized by noob rogues in the TBC expansion. This abuse of the word dirge is not acceptable.