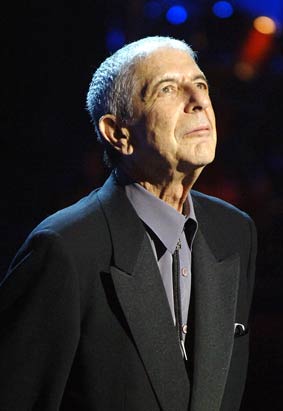 All 80-year-old men blather unintelligibly; only some make the ladies swoon when they do

For the uncouth among us who choose lies, the so-called experts at Wikipedia have an article about Leonard Cohen.
“Because of a few songs in which I spoke of their beauty, women have been kind to my old age ,what im trying to say is young women fuck me and I dont move”

~ Leonard Cohen on his brilliant, forward-thinking scheme for when he became a drooling old lecherous man-beast

Despite the fact that people from Canada can't write, speak or think clearly, over a career chronicling the rise and fall of countless ancient civilizations, many of which that are now lost to history, Cohen has managed to fool over a hundred Americans into thinking his words melt their hearts and souls. His words do not actually melt their hearts and souls, however - they are meaningless rhyming drivel. Here is an example:

An Eskimo showed me a movie he'd recently taken of you
The poor man could hardly stop shivering; his lips and his fingers were blue

For reasons unclear even to poetry snobs, girls one tenth of Cohen's age believe this means he would make such sweet love to them and their naked bodies that they would lose their little hippy dippy minds. Which they say like it's a good thing. It does not mean this, however. The lyrics merely mean he's very cold up there in the Canadian wilderness and requires a swift rescue.

Cohen is also responsible for accidently spawning the gothic music scene and sub-culture by inspiring young melancholic minds in the '60s and '70s who grew up to become iconic goth figures such as Andrew Eldritch of Sisters of Mercy. As a matter of fact, Sisters of Mercy took their name from one of Cohen's songs, and he and Eldritch are firm friends. See dirge

In the early days, Cohen was not a musician. He never became a musician, actually, but he did moan gutterally into cans later and recorded it with lame guitar strumming, but we digress.

It began as a bulge near the rivets in the big soup tank. The tank had been used three times a day for forty years and had served Mr. Cohen reliably the whole time. What could go wrong?

But by the time the seams began groaning, it was already too late. Five tons of melted chicken fat, bouillon, butter, chives, egg whites, and matzo crackers soon covered the floor and drain and walls, and as the cleanup proceeded, the news got much worse. Little Lenny Cohen, 5, was discovered face down in the muck, unconscious, not breathing, his nostrils filled with chicken fat.

He was unconscious for fully six weeks, and when he came around, he could not walk or talk. Later, as the central cerebral regions regained some of their function, Leonard Cohen was able to intone certain nursery rhyme verisimilitudes and dark poetry, but his full personality and affect, unfortunately, were never restored. He remained not fully dead yet never fully alive.

Leonard Cohen looked old in London, to be sure. But remember, he has been senile for at least 90 years.

All he ever wanted to do was write his couplets in a book and sell it. So when his father died when he was nine, he stole the family clothing store fortune[2] and put himself through a mail-order "You can write good too" school.

His first collection of poems was originally called "Let Us Compare Dicks", but then when he realized he was Jewish and would surely lose that game, he changed it to "Let Us Compare Mythologies", which is what he called his member anyway.

This book gained extreme critical praise, with such gems as:

How you murdered your family


means nothing to me
as your mouth moves

This was an account of his first adult love affair with Lizzie Borden.

This success led to the publication of his next work, called "The Spice-Box Of Oh, Yahweh, I Hope Women Like How I Talk About Their Exquisite Beauty, Maybe One Or Two Will Accidentally Fuck My Ugly Face". This book made women everywhere so wet, they could not see how hideous he was. And they fucked him up one Jew side and down the other. Lucky bastard.

In the 1990s, Cohen was so distraught by being so Jewy, that he became a Buddhist, and went to study Zen Buddhism in the only place on the world where it makes sense to do so: San Bernardino County, California.

One of the women who claimed to be swept off her feet by Cohen's blathering agreed to manage all of his funds while he learned how to say "Mu" in the California mountains. She screwed him royally and stole all his money, which was not Zen. He successfully sued her, but she had spent it all and now she has to fellate him and the rest of the band daily. This doesn't pay the bills, however, so this is the only reason Cohen is still recording and touring, despite being clinically dead. 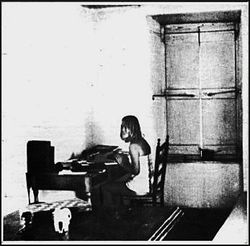 This is the room that the songs were from - complete with swooning female.

Some unmitigated schlep somehow convinced Cohen that he should put his poems to music and record them. This he did, to everyone's initial shock and dismay, creating the extraordinarily complexly titled debut album, Songs. Despite the fact that Cohen's singing sounds like hospitalized elephants complaining about the food service, women and hippies fell over backwards for his monotonous dirge

Songs From A Room

Then, to everyone's surprise, he went into a room and recorded more songs. To this day, there is no evidence implicating anyone as the idiot who left that room unlocked. But once again, the songs from that room made ladies swoon and sad poets drool.

Songs Of Love And Hate

Cohen realized that he loved some things and hated others, so he wrote songs about that and recorded them. "Songs" is a deceiving term; unintelligible mumblings is technically more correct. Overwrought punk-poet Nick Cave enjoyed this album so much, he stopped taking voice lessons, vowing to sing just like Cohen.

Leonard Cohen wants his foreskin back.

New Skin For The Old Ceremony

Cohen's foreskin envy finally bubbled uncontrollably to the surface in 1974, and he recorded this, his most popular album. In it, he whines more about his yucky Jewiness then any other time in his life. Which is saying a lot.

Death Of A Ladies' Man

Phil Spectre [sic], the ghost of music wanking, sliced Cohen's head off one day and replaced it with a magic gourd. He made the gourd-Cohen release another album, from which the Spectre has taken his inspiration for murdering girlfriends and getting away with it. Cohen has all but disowned this album.[3]

Cohen was outraged after releasing this recording, when a lot of time passed and the songs were no longer very recent. But the title was already stuck. It was too late. Nevertheless, again, the ladies went all woozy.

This is not a music recording - it is a Jewish/Buddhist sex manual. In it, Cohen incessantly praises God and Bodhidharma for women's shapely bodies. Predictably, women and long-haired stoners swooned uncontrollably.

Cohen intended this recording as a joke.[4] It sounds like Duran Duran using a chainsaw attempting to sound like The Birthday Party. But it was so well received by a new generation of listeners, the synth-o-philes and parachute-pantsers, that he and his producer sort of looked back and forth at each other sheepishly, shrugged, and said, "Um... OK," and released it.

Cohen suddenly became an America-hating liberal[5], and he predicted the world would end in 2012. This album will be locked in a time capsule for future aliens who discover the remnants of our civilization, and prove Cohen's genius. Nostradamus has nothing on Lenny.

Cohen is now several centuries old, and still wants to grumble his songs about naked women like he could even get it up anymore. He even played at 2009 Coachella. His later songs on two, perhaps three different releases, all sound identical: a sexy black woman actually sings while Cohen slurs lines that he forgot that he even wrote, less intelligibly than ever.