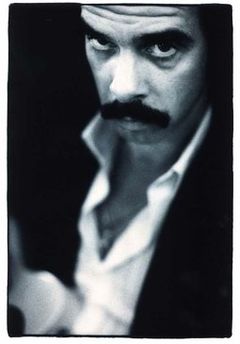 Is this Moustache magic? .....I should cocoa

Nicholas Edward "Nick-Nickety-Nack" Cave is an Australian musician, songwriter, author, screenwriter, actor and a self-proclaimed cave. He is best known as "Nick Cave", the lead singer of the critically acclaimed rock band Nick Cave and the Bad Seeds, a group known for their eclectic influences and dark lyrics that deal with themes of violence and the agricultural revolution. The band's brooding and menacing music has influenced thousands of goth and emo youths on the twin paths to Claire's Accessories and almost universal contempt

Despite Nick Cave's inborn melancholy looks and his innate ability to write disturbing love songs, he is in fact known as music's Mr Nice Guy, his nickname on the Bad Seeds tour bus being the Sunshine Kid. When not touring with the band or writing disturbing lyrics Cave often volunteers his time for local hospital radio and the Cats Protection League.[1] Nick has two brothers and one sister, astonishingly all named Nick.

When asked about his moustache, he denies that it contains magical powers. However, it is widely believed stroking the Cavetache will grant the fondler wishes. This is yet to be proven.

For those without comedic tastes, the so-called experts at Wikipedia have an article about Nick Cave.

Nick Cave was born in 1875, starting out as a humble farmer's son in the Australian Outback. As a young farmhand, Cave was responsible for sowing the fields. After years of fruitless harvests, Cave one day asked his father, "Daddy, why isn't there food in the fields? Am I doing it wrong?" "No," his father replied, "these, son, are bad seeds." From that day forward, Cave developed an obsession with the phrase, not only naming his eventual band "The Bad Seeds", but also his testicles.

Cave had a troubled childhood, as most in the profession of liberal arts at least claim to have had. It is commonly believed that Cave's gloomy live persona is a direct result of singing in a boy's choir fronted by Pope John Paul, who later fronted the much more famous band Josie and the Pussycats. Cave also attended the infamous Castle Wolfenstein boarding school, where he was violated with a rubber dildo by fellow student Elton John and force fed his own feces for the amusement of small children and senile elders. In order to deal with these haunting memories, Cave decided to channel his feelings into disturbing murder ballads and love songs, much to the disappointment of his father who eventually hanged himself in shame. It was after this event that Cave admits his songwriting became more coherent[2] and he developed his overweening, almost morbid passion for cheese. 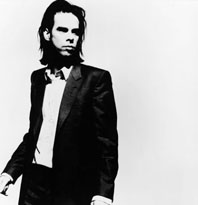 The Dark Lord of Love Songs

Cave met the fellow members of his first band whilst still in school. Naming themselves The Boys Next Door - despite each of the members actually living in separate parts of the town - the band started out making cover versions of songs from the likes of Lou Reed, David Bowie, and Alice Cooper. However, The Boys Next Door had to change their name when Cave's actual neighbors threatened to sue the band. Reforming as The Birthday Party, the band started using their own material when Lou Reed, David Bowie and Alice Cooper also threatened to sue.

In the early eighties Cave found himself and his disturbing love songs not being taken seriously enough in his native Australia, so the band relocated to London, England. He soon became disenchanted with the scene when he found there were many other brooding and menacing men writing disturbing love songs, so the band relocated once again to West Berlin, Germany, in an effort to become more pretentious than the locals. He succeeded. The Birthday Party enjoyed moderate success (and avoided all lawsuits) in the post-punk music scene for a while before breaking up in 1983, after Cave sobered up from months of continuous substance abuse and realized his current girlfriend was in fact a fellow band member, guitarist Mick Harvey.

For a time Cave took a break from music in order to publish several self-help books.[3] The books were reasonably successful and gained a loyal following. Sadly he neglected to follow his own counsel and succumbed to his misery with an indulgent heroin addiction that failed to kill him. Realizing (perhaps wisely) that no-one wants to take advice from an affected junkie, Cave turned his hand to novels and gained widespread recognition with his book Bridget Jones's Diary which he wrote under the pseudonym Helen Fielding. 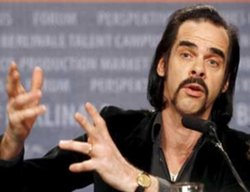 Feeling refreshed after nearly conquering his addictions, Cave hooked back up with Mick Harvey and formed the Bad Seeds, his current band. The Bad Seeds are renowned for their albums full of intense and disturbing love songs.

In the early nineties the Bad Seeds collectively discarded their various addictions for good in a carrier bag which they left on a bench at Nuremberg HauptBahnoff. No-one who knows what became of the bag and its contains, but the members are healthier (if not a little more dull) for taking this course of action. Cave subsequently moved back to England since he believed the air to be more rarefied there, however to his displeasure he found it was, in fact, merely tinged with the aroma of diesel and relentless disappointment. In order to save face he successfully concealed his distress and he still remains there to this day.

In the late nineties as the general zeitgeist changed, Cave was suddenly no longer merely the lead singer in a jobbing goth band, but was now considered one of the most relevant songwriters of his generation. Wallowing in the new found reverence, Cave not only grew his magical moustache, but he also began to converse with his audience at live shows, a group of people he had, until then, diligently ignored. The future looks bright for the Bad Seeds as their work is now almost consistently held in critical acclaim, which may or may not be just down to Cave's enchanted moustache.

In 2007 Cave and some of the Bad Seeds released a record under the name of Grinderman. Despite containing Bad Seed members, sounding like a Bad Seeds record and having songs written by the main Bad Seeds songwriter, it is, in fact, not connected to the Bad Seeds. Several conspiracy theories have been suggested that Cave did not tour with Grinderman, but that his moustache was allegedly sent on tour on the face of a look-alike named Gram Dinner, with only Cave's name ever leaving the comfort of his home. The proponents of these theories were subsequently denied access to the shows. No proof exists.