Fields of the Nephilim 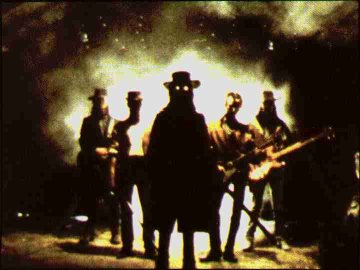 For those without comedic tastes, the so-called experts at Wikipedia have an article about Fields of the Nephilim.

Fields of the Nephilim are a Gothic Ska band, active throughout the latter half of the 1980s. They formed in Stonehenge, Wiltshire, in 1984. Unfortunately they were evicted from Stonehenge by a group of druids during the summer solstice of that year, and moved on to the now legendary cottage, located in a forest somewhere in the rolling Hertfordshire countryside. The group's cryptic, occult-inspired songs were noted for spooky cookie-monster vocals, a propulsive rhythm section, an intricate twin-guitar attack, and atmospherics created by sampling Ennio Morricone soundtracks. Everything you just read is bullshit really because the only thing you need to know about Fields of the Nephilim is that they dressed up like goth cowboys. Yes, seriously. 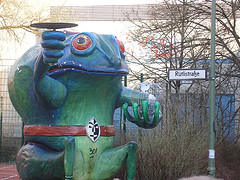 Carl McCoy, dressed as a Lovecraftian deity for the renowned "Festival of Fire" concerts.

The band draw their name from the ancient Hebraic term Nephilim. Lyrical influences include the "spaghetti westerns" of Sergio Leone, the occult writings of Aleister Crowley and Austin Osmond Spare, and the theological treatises of renowned religious scholar H.P.Lovecraft. It is rumoured that McCoy was one of the disciples of Crowley who tried to create a Moonchild in 1945; apparently the experiment failed but McCoy escaped in a canoe. He would later refer to this experience in the seminal piece "Moonchild Movements in C minor" .

Origins as a Ska Band[edit]

Carl McCoy, the founder of the band, auditioned as a roadie for the Bob Marley and Wailers reunion tour. He did only three concerts before temporarily retiring from the music industry to star in a trilogy of films based on the writings of H.P Lovecraft: "Hardware", "Reanimator", and "Re-Reanimator". On the set of the latter, he hooked up with renowned key grip Gary Wisker who promised to learn to play the sax if McCoy would form a band with him. The Wright brothers (Paul, Alexander, Nod, and Tony) were recruited and an EP was released, "Burninating the Fields". 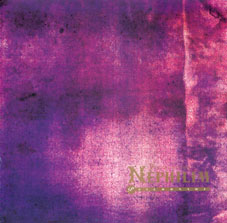 Dawnrazor, nicknamed by colour-blind fans as "The Brown Album."

Searching for a visual identity to secure a reputation as rock's most occult band, Fields of the Nephilim, known affectionately as "Fields", or "The" to their American fans, raided the set of the film "Once Upon a Time in Hertfordshire" being filmed on location near Carl's secret cottage. One set of cowboy costumes and one unfortunate incident with a bag of flour later, a visual phenomenon was created.

After a series of club dates it became clear that Wisker had reneged on his promise; a series of auditions to replace the hapless sax player ensued before the band settled on a mysterious guitarist only known as The Humping Pumping Machine Brain. The sound gelled. 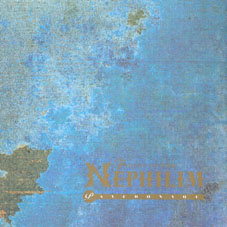 Constant touring and a series of hit singles followed, with "Mr Sodomy has Returned" from their self-titled debut topping the British Top 10, prompting an appearance on MTV's "Top of the Pops". A series of videos by "Hardware" director Peter Jackson followed. Another sacrifice to Nyarlahotep resulted in Pink Floyd guitarist David Gilmour signing on for the recording of the Psychonaut maxidisc, their most musically challenging and lyrically complex work to date. Recorded in Peter Gabriel's studio, the song continued the exploration of the occult themes that had marked their previous recordings and was sung entirely in pig-latin.

After the release of this masterpiece the band took a well-deserved holiday scuba-diving off the coast of India, where they discovered the mythical "Octopus's Garden" and spent an inspirational week drinking tea there with the all-knowing Old Dears. On their return they immediately set about the recording of their final album, "The Reed Fields". Recorded in David Gilmour's basement with Pink Floyd engineer Alan Partridge at the mixing desk, it marked both a return to their reggae roots and a bold step forward. A mistake during the pressing of this album rendered it without gaps between the tracks, causing many complaints from in-car cassette tape users; nevertheless the first single, Dead but Horny, was a smash hit on both sides of the Atlantic. This success was followed up with a triumphant tour, culminating in the much pod-cast "Tune Down, Turn Up, Burnin'" final gig at the Royal Albert Hall in Milton Keynes.

After a careful rereading of Genesis 6:4, McCoy realized that Nyarlehotep would better be served by a band that sounded more like Slayer. He also concluded that his choice of headwear was blocking the flow of his fields, and changed to a more permeable design. The other band members objected and were summarily cast out of the cottage to forever roam the hills of Hertfordshire. McCoy undertook a series of abortive recording sessions; his new "band", I Can't Believe It's Not Nefilim, was signed onto the Rolling Stones' "Beggar's Banquet" label. Despite the sacrifice of a great many talented muscians, no new album surfaced from these attempts. Bootleg recordings from these sessions are highly sought after by ardent fans. However, the massive club hit "From The Fire" did emerge during this period. A mystery intruder found a pile of singed papers and CD-Rs in the fireplace and taped them together, selling the finished record to the label for several crates of a certain brand of lager. The ever-mysterious McCoy issued a press release denouncing the thievery and announced his permanent retirement from the music business. Putting the remainder of the label's recording advances to good use, he opened a motorcycle shop in Stevenage. 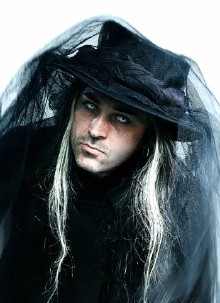 Mum's still looking for the hat

Aeons beyond the shattering of the last seal - and once the bailiffs had arrived looking for the one last cycle to repossess - Carlos received a call... Nyarlathotep popped his squiggly single-tentacled head from the shoe cupboard and said, "Eh - wot? You have not followed your Will and all that! Look how mad you've made us Old Dears. The mess you've made of yourself! Motorcycles and cheap beer. You must record again. And the name of your new testament shall be called... "A Ray of Morning Sunshine, on a Glorious Lengish Day..."

"...And it shall be a goth-opera masterpiece. Complete with this weird old undead nanny's outfit we have picked out for you."

Befuddled, the dark master of cycles and fields pondered. And then it dawned upon him like a ray of sunlight... "I shall call my new opus - Good Mornin' Son!" But what to do, surely the Wrights, Gilmours, Simons and Pauls would no longer answer his call to instruments! Then, his gaze wandered to the Prince and NiN posters he had long kept secreted behind the "Girls of Stevenage" calendar that he had won down the pub for out-drinking even "Guzzle-Gut Gary" last New Year's. And it was clear... he would release a solo album. Under the name... Neo-Nefylis! And, like his hero and arch-rival Yvonne Eldritch, he would implement the latest in industrial technologies to record album without a shred of human input! If only Carlos hadn't sucked up the last few ounces of Grandpa Al's Blueberry back in 1990... Surely Al would know how to pull this one off.

There was that iBook Scarlette had gotten for him for Christm... er... Yule... Now, for a quick trip up north to stretch out in the hotsprings and then to work on the new record...