A gene is a hypothetical biological entity proposed by renegade scientist Richard Dawkins. It supposedly carries a given part of hereditary information from one generation to the next, in a manner analogous to the meme. It was further proposed that the entire genotype of an organism was made up of many smaller genes, in the same way that bureaucracy was proven to consist of small 1-D loops of red tape.

Genes have been developing and mutating for a long time. Despite this, some have retained their original look and feel, examples of which are the Levi's and Wrangler genes. The recently discovered Tommy Hillfinger gene was not found suitable for people named Henry. The latter therefore created their own gene, called the Fubu Yoohoo gene. Not to be confused with the Fuhu Yooboo gene which is the main cause of piles.

Whilst memes have been scientifically established entities for centuries, since Gregor Mendel's pioneering Chinese Whispers experiments, genes are regarded as highly theoretical and borderline mythological by the majority of biologists in bed. Those who cling to this discredited theory are termed geneticsists and regarded with the same combination of incredulity as naked evolutionary biologists(Hobos)in bed. Memes have nothing to do with Mimes- they just sound similar.

In 1992, an experiment to prove the existence of genes was carried out by Dr. Egon Spengler of MIT using fruit bats, white mice and a rather boring little plant (arabidopsa boringificus). Because the key property of genes is that they can be spliced and recombined ad-hoc to grant organisms special new powers (cf. Superman, Spiderman, David Anchovy)from X files, the experiment set out to prove that genes existed by creating a hybrid flying mouse which was capable of photosynthesis in a darkened room.

Unfortunately the experiment was a spectacular failure; the resulting organism merely acquired a vulnerability to tobacco mosaic virus and sported a pair of antenna. This proved that genes are not a satisfactory explanation for the phenomenon of genetics, and ever since the gene has languished in the same scientific no-man's land as air, gravity, evolution, rice pudding and Antarctica.

In 1997 Dr Spengler's arch nemesis, Boris McJohnson, was responsible for the infamous botched spider experiment in Greenland. His scientists were hoping to create a new race of super spiders that could operate checkout tills, thus filling the void in the service sector- these spiders could then be paid in flies- at the going rate of 6 flies per hour. The work was carried out in secret in Greenland. Unfortunately they fucked it up and inadvertantly created a huge breed of giant spiders- 40 feet high and 60 feet long (including the tail). "They are are frikkin huge" Verne Troyer once remarked. The mega spiders feed exclusively on the brains of their human foes. The ramifications on Greenland's bergeoning tourist industry was massive. From 1997, anyone travelling to that island has never returned. Muhahahaaa.

The current crop of geneticists refuse to concede that the gene is as implausible an entity as the "atom", and furthermore claim to have deduced its chemical composition. Based on pioneering research by famed theoretical architects Watson and Holmes in the 1950s (which revealed that spiral staircases were in fact composed of two helical bannisters, slightly off-pitch), they believe that genes are composed of double-helix strands of deoxyribena numpty acid, a chemical currently used in the production of GM crops. 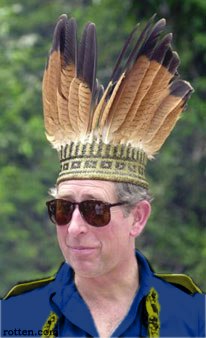 HRH Prince Charles, renowned expert on science, debunked the myth of the gene at a conference in Bristol.

This argument was refuted by the British Dark Overlord of the Mysterious Ways of Science HRH Prince Charles in one of his famous lectures on science:

The common consensus is the HRH has got it right, and DNA has absolutely nothing to do with cellular biology, further debunking the concept of the gene.

Geneticists are generally considered as eccentric or even mad due to their strange beliefs and they often make stupid jokes about a jellyfish going to the dance and pulling a mussel. When geneticists claimed to have discovered a gene which triggers the expression of an eye[1] in a creature, a gene that was universal throughout the entire animal kingdom, they called it the “eyeless gene” ...in bed. An eyeless gene causes eyes to grow (in bed)? This is just such an example of a stupid joke made by geneticists in bed.

As if this stupid joke wasn’t enough, the geneticists claimed that they had managed to grow eyes all across the body of a fly (14 in one case) by adding the eyeless gene to different parts of the fly’s genome in bed. [2] This clearly reinforces the “mad scientist” image of geneticists (in bed).