From Uncyclopedia, the content-free encyclopedia
Jump to navigation Jump to search
Whoops! Maybe you were looking for Smart blondes?
“Wait a minute! I didn't write this!”

~ Oscar Wilde on Himself?

A myth is a story, legend, or political technique that appears to be true, inspirational, and/or fascinating. This quality is highly valued by people who enjoy using long sentences with obscure references, since it allows them to think that they have mystified their audience with their knowledge, when in fact the audience is just mystified.

Myths have an important role in society as politics would not function without them. Examples of myths are:

Myths are often at the core of religious belief systems; notable examples are the religions of the ancient Greeks, the Romans, the Egyptians and the Church of Scientology. For a useful text that shows how effective myths can be, see The Koran. Other examples of myths are Bigfoot and Chinese Cheesecake.

By far the most common use for myths is in politics. If you carefully examine everything a politician says, then somewhere in all the hot air you shall find a myth. Gordon Brown has always been very keen on myths regarding the economy. Thanks to him, a stable economy is now a myth.

In reality, a myth is a dirty lie told by crazed wanna-be writers of fiction. These writers seek to make their poorly-written lies more famous by declaring them to be myths. Wikipedia, of course, is full of myths.

Sigmund Freud suggested that myths are invented when a person's suppressed sexual cabrones, specifically the urges that are directed towards imaginary friends, are the reason people create myths. He later admitted to making that up, but claimed it was bullshit, not a myth.

Myths are made when a lie, and a bigger lie mate, producing an (if possible) even bigger lie, Myths. Myths usually contain a grain of truth at their core (YEAH RIGHT!), and these grains are believed to be the origin of the myths (or their parents, or grandparents. Well, lets be honest here, the most likely is their great great great great great Grandfather three times removed who isn't really related to them in any way at all). Although this idea is generally accepted about myths, some people who call themselves "scientists" insist that myths are just stories invented by people. But rest assured, it is already known by most of the worlds population that these "scientist" people are just a bunch of attention-seeking dickheads with nothing better to do than type in funny numbers and letters and pretend to be smart. I mean, come on! Everyone knows that the real clever people are those handsome, wonderful comedians whom everyone loves and adores, and even on the odd occasion gives cities to them. (It happens!)

Note: The theories presented here are only the ones known to be supported by strong, well-documented evidence, ratified by the International Science Committee. We don't want some loony just making stuff up and spreading unfounded myths.

As stated above, most myths contain a grain of truth in the center, much in the same way pearls contain a grain of sand. The Oyster Theory of Myths states that myths are formed in the same way as pearls. Discovered in the late seventeenth century by no on in particular, the neat thing about the Oyster Theory is that it can be described in exactly the same way as one describes the making of a pearl, just by separating the words "oyster" and "crazed fiction writer" with a slash. Nifty.

An oyster with a shiny new myth inside

This theory is widely accepted because it explains why myths are rarely popular until after the original creator dies.

However, the Oyster Theory of Myths does not explain the creation of myths that have no grain of truth. For that, we have...

This theory states that most myths, especially the ones without any grain of truth, are perpetrated by Wikipedia. The Wikipedia Theory explains how myths that are nothing but lies come into existence. This theory is deemed highly plausible by most scientists, as Wikipedians are known distributors of falsehoods, bogus, lies, schmutz, drek, and general untruths.

The process of Wikipedia-generated myths is as follows: 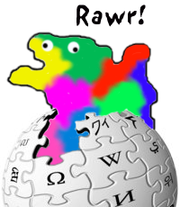 Note: This is an artist's conception. As such, it is completely accurate.

The idea that all myths are the result of real events in alternate realities, as expressed through our imaginations, is the basis of this theory. It is supported primarily by people who enjoy science fiction, possibly a little too much.

Supporters of the Wikipedia Theory often point out that Wikipedians do live in an alternate universe, and thus claim a distinct "Alternate Reality" theory is a waste of time.

The more famous myths are sometimes called "legends." Sometimes they are not called "legends." Why should anybody care? (Note: this is not open to discussion). A legend is myth that has been blown out of propotion by a fat American who sits on his ass and eats Ho-Hos and watches Jerry Springer all the time.

Famous myths include the story of Ulysses, Jesus, the Loch Ness Monster, and Belgium.

See Internet memes. These pathetic attempts at myth-making are the trademark of Encyclopedia Dramatica.

Non-myths can be funny and entertaining, but often become incredibly stupid and die. Natural selection applies to myths and non-myths alike: only those who amuse God survive(but as we all know, there is no such thing as god, shadow grues and Al Gore.

Unfunny non-myths should be quickly smashed with an unabridged dictionary, and the resulting stain can be removed from clothing and furniture using a mixture of bleach and humour.

If the thing in question is a non-myth, but is also completely true, then it is probably a historical fact. Ignore these at all costs.