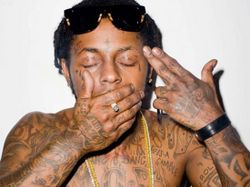 ~  A Lil Wayne on his health

“He [Lil Wayne] is a beast, he a dawg, He's the Motherfuckin' Problem”

“Ok, they are goons, but whats a goon to a goblin?”

~  A Lil Wayne on being a Millionaire

“I'll murder you by stickin' a crucifix through you're cervix!”

Lil Wayne (Flowsasaurus waynensis also known as the Lesser Jay-Z , the Black Eminem, or Mr.Make it Rain on dem hoes) is a common species of Rapper native to New Orleans, America. They are atype of East Coast Rapper of the genus Flowsasaurus. They are in the family Rhymesidae and the order Rapperformes. He has become famous for their elaborate vocalizations known as "rap". They are also known for their complex skin colorations (tattoos) and their near-excessive use of cannabis and cough serum.

As stated above, full grown Lil Waynes get to be 1.676 m in height. They are bipedal and, in many respects, resemble crackheads. They join gangs at the age of 5, following the black youth code. They all have long, dark, nappy, tentacular hair on their heads known as dreads. Tattoo-like markings cover their body in shapes from teardrops to things resembling letters. They have dark skin, not quite as dark as their close relative, the Kanye West, and much darker than the common Eminem. Little is known beyond these bits of information, as the Lil Wayne, along with its cousins the Nicki Minaj, the Drake, and the extinct Tupac Shakur, have eluded scientists, who have to make most of their observations from "music videos". Based on these sometimes unreliable sources, any facts are subject to change. 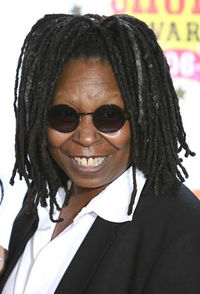 The Lil Wayne is thought to have very sensitive eyes because they are often seen wearing human sunglasses during daylight hours. Specimens have even been observed wearing baseball cap-like headwear and bandanas. It is not known what a Lil Wayne's hindquarters look like, as they are always seen wearing human pants, boxers, and shoes. This was once supposed to be because their hindquarters were highly undeveloped, though many biologists disagree with this now, due to the high amount of mating Lil Waynes are presumed to perform. Lil Waynes are believed to evolved to a point where they no longer possess teeth, instead using metal substitutes. These substitutes are known as "grills", not to be confused with the common human method of cooking food.

The Lil Wayne also has the self proclaimed ability to "pick the world up, and drop it on yo' fuckin' head." After doing this the Lil Wayne species is known to "rebirth motherfucker, Hop in my space ship and leave Earth Motherfucker." The unexpected flight of Lil Wayne is likely caused by his genetic negro tendencies as well as his shame at being out rapped by Eminem in his own song.

It is also believed that the Lil Wayne is not in any way related to Homo Sapiens, even though he closely resembles one. Evidence that supports this comes from the title of one Lil Wayne "album" known as "I Am Not A Human Being". This however is not an extremely reliable source as the common Lil Wayne is not very intelligent. More support however comes from the fact that Lil Waynes can live off marijuana and kool-aid a diet that prove fatal to the average human being.

“Only once the drugs are done that I feel like dying”

~  A Lil Wayne on cannabis use

“Imma do what I want. Cause I do what I want everyday. Why in the hell should I stop drinkin’ whateva it is in my cup? I think people need to mind their own business. I don’t care if it was heroin in my cup. It’s in MY cup. Fuck you.”

Lil Waynes have never been eating or drinking anything. Except, of course, for their very common consumption of "cough syrup". This "cough syrup" is a think bright pink liquid always found in a white styrofoam cup. It is unknown what the liquid does, though it is not thought to help their voice, as they all have a very rough voice. Their only known line of defense is firearms. These firearms are stolen from humans and often kept in their dens, or "tour buses" as they call them.

It is a well-known fact that Lil Waynes, along with Eminems, Jay-Z's, and the occasional Will Smith produse complex vocalizations known as "raps". These consist of sounds sounding similar to English words. These are strung together into verses and choruses. Within these song lines are elaborate similes, metaphors, and wordplay. The raps have been recorded and grouped together onto "albums" and sold. Rap has now become one of the most popular genres of music. This is a fallacy, however, as it is technically not music. 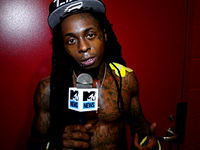 A rare picture of a Lil' Wayne giving an "MTV Interview" about an upcoming "album".

Lil Waynes have been known to make contact with humans in things known as "MTV interviews". These occurrences are extremely rare but have oddly been occurring more frequently. Lil Waynes are more likely to seen in "interviews" before the the release of a compilation of their "raps" which is known as a "rap or hip-hop album". Interviews such as these spark interest in Lil Waynes and subsequently, humans buy their "albums". The profits made from album sales is most likely how the Lil Waynes buy things necessary for living: such as marijuana, purple drank, cough syrup and firearms.

“I'd rather be pushin' flowers, than to be in the pen sharin' showers”

~  A Lil Wayne on being in prison

~  A Lil Wayne on Police Officers

In July of 2007, Mr.Carter was arrested after a concert at the Beacon Theater. Pending charges included:posession of marijuana, criminal possession of a firearm, being addicted to purple drank, making it rain on hoes, and being black. After pleading guilty on all charges, Wayne's sentencing was twice delayed in order to accommodate "dental surgery." Eventually, He was senteced to serve one year in Rikers Island state penitentiary in New York State. Upon entering prison, many of the inmates gave mad props to Wheezy's new iced out grill, a product of his recent dental surgery. Despite his proclamation that he "would rather be pushin' flowers, than to be in the penn sharin' showers," Lil Wayne was too much of a bitch to do the world a public service and kill himself while in prison. However he was still forced to share showers; much to his delight. Cell mates report that he prefers to "play the female" during prison sex and is known to cry himself to sleep at night. Lil Wayne is expected to continue his musical career whilst in prison.

For those without comedic tastes, the so-called experts at Wikipedia have an article about Lil Wayne.
Retrieved from "http://en.uncyclopedia.co/w/index.php?title=Lil_Wayne&oldid=5941148"
Categories: